When I learned that I’d be traveling to Montana earlier this summer with a group of cotton farmers, I honestly didn’t know what to expect. But I had a pretty good idea that it would be a fabulous time for everybody. Believe it or not, I had a positive experience two years ago when I traveled with a similar group to North Dakota – and I knew this trip might be even better. 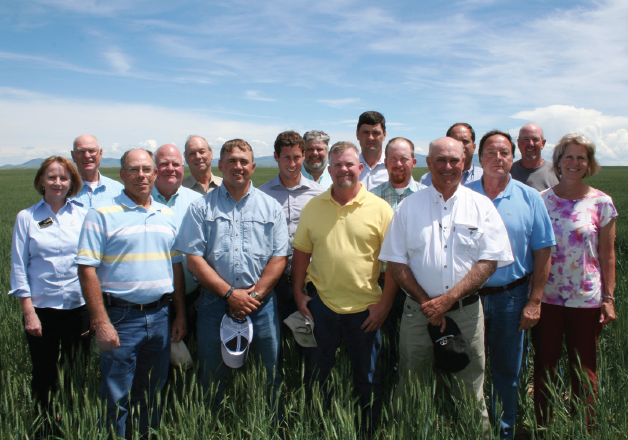 It was an opportunity for learning when this group visited Montana.

The program is officially the National Cotton Council’s Multi-Commodity Education Program (MPEP) and is supported by the Cotton Foundation with a grant from John Deere. Try saying that fast two or three times! The main purpose is to create goodwill among farmers from different regions of the country and form important coalitions. These relationships can play a big role in Washington when agriculture is trying to forge a united voice in the development of a Farm Bill or other important ag legislation.

At any rate, our group represented nearly every region of the Cotton Belt – from California to South Carolina and all points in between. I’m not sure what the other tour members were thinking, but I did my best to tell them about my trip to North Dakota in the summer of 2012 and how much they would enjoy this trip. Farmers can find common ground with other farmers quicker than any group I’ve ever seen. They speak the same language no matter what kind of crops they grow.

In case you didn’t know, agriculture is the No. 1 industry in Montana, and it receives excellent support from the state government. We saw a lot of wheat and barley crops in the area between Billings and Great Falls. But we also learned about all of the other important ag business connected to these two crops. Possibly the biggest beneficiaries are breweries located in the state. But don’t get the idea that Montana is one-dimensional when it comes to agriculture. Cattle ranchers are everywhere. In fact, here’s a statistic that can give you a better perspective about cattle ranchers in Montana. There are more cattle in the state than people. Of course, the state has only about one million PEOPLE, but that is still an impressive statistic. Whatever you do, don’t ever underestimate the importance of cattle and grain farming in this state.

And where do the cattle roam? Just about everywhere. This is a state where you can see snow-capped mountains in the distance while it’s 80 degrees where you’re standing. And now I know why Montana is called the Big Sky state. The wide open spaces create unbelievable views when you’re standing in the middle of a barley or wheat field. The land seems to stretch forever – as far as the eye can see.

Not surprisingly, our group asked a lot of questions about water availability, crop rotation, irrigation, political issues and anything related to growing a crop. Our hosts were equally eager to share their information – while being equally inquisitive about what it takes to grow a cotton crop. Ironically, some of these same Montana farmers had visited Georgia and the Southeast in 2013 as part of the MPEP program. So, there was a mutual appreciation for the challenges each group faces on a yearly basis.

When you read our story in the August issue of Cotton Farming, you’ll notice the positive remarks from the cotton farmers who traveled to Montana. Not only was it a learning experience about a state that thrives on agriculture, but a lot of friendships were made during the week.

Our thanks to the Montana Grain Growers for arranging such an educational trip. We now know that Montana farmers are just as dedicated to their industry and have much in common with their cotton farmer friends to the south. Somewhere down the road, we hope to meet our Montana friends again and share more time with them. It’s a cliche, but this trip was an experience that our cotton group will never forget.

Lifetime friendships were formed, and all of us in the cotton industry have a new-found appreciation for Montana agriculture.