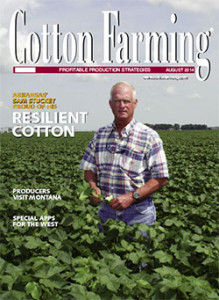 Nematodes – those microscopic pests that attack a plant’s roots and adversely affect cotton yields – can cause enough headaches for a farmer to last a lifetime. Whether it’s reniform or root-knot, this pest can often go undetected until it’s too late to rescue an infected field.

The good news is that farmers have a lot of choices in controlling this troublesome pest. True, many seed companies are offering new varieties that are “nematode resistant,” while other strategies may involve changing up seeding rates at planting or implementing crop rotation.

As farmers are prone to saying, it’s nice to have so many choices in their toolboxes. However, longtime University of Georgia Extension plant pathologist Bob Kemerait talks about this issue with a sense of urgency – and with somewhat of a different approach. It’s not so much a case of should producers try to control nematodes. It’s more about farmers being out of business unless they tackle the problem head-on. For that reason, Kemerait says producers should consider applying a soil fumigant (Telone II) in a site specific approach.

“So why don’t producers use Telone?” Kemerait recently asked rhetorically. “The first answer I get is it’s expensive.” However, he is quick to point out that it’s more expensive to let nematodes flourish unchecked. That’s why he likes this new approach to deal with the pest problem. “Let’s use Telone where we need it,” Kemerait says. “If we can cut the application in a field by 60 percent, you can’t tell me that’s not sustainable.”

Historically, Telone has been applied across a cotton field at a rate of three gallons per acre, typically seven to 14 days prior to planting, though Georgia producers can apply it at planting. Research shows that this soil fumigant can improve lint yields by 200 pounds or more, depending on the severity of nematode pressure and growing conditions. Georgia cotton producer Bart Davis farms in Colquitt County in the southern part of the state. He is a proponent of Kemerait’s site-specific approach for Telone applications. Even though he didn’t make a full application this year because of wet conditions, he is confident that he will see a decrease in nematode populations.

“We are hopeful that the small amount of Telone we put out will help,” he says. “We have done some test plots with Bob (Kemerait) on Telone, and they performed as everybody hoped they would.” Some observers call nematodes “invisible pests” because they attack plant roots and usually can’t be seen in a field. As most producers are aware, Telone has always had a good reputation for controlling nematodes. In the early days, however, it was expensive and required a special calibration on a sprayer before it could be put out on the crop. Danielle Hardin, product manager for Dow AgroSciences, says the soil fumigant has become more user-friendly for various reasons. “With the advent of field prescriptions and GPS, we have come a long way in overcoming the cost barriers,” she says. “It’s an investment that pays for itself in the long run.”