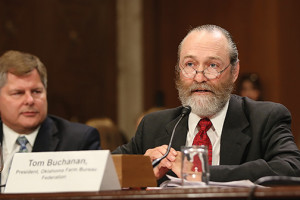 Buchanan explained to the U.S. Senate subcommittee how the EPA’s Waters of the United States rule would hinder the American farmer’s ability to produce food and fiber for the world.

In testifying before the Senate Environment and Public Works Subcommittee on Superfund, Waste Management and Regulatory Oversight, Buchanan explained how Oklahoma’s farmers and ranchers are affected by the EPA’s regulations, especially its Waters of the United States rule.

“After carefully studying the proposed rule, we at Farm Bureau concluded that the rule’s vague and broad language would define ‘waters of the United States’ to include countless land areas that are common in and around farm fields and ranches across the countryside. These are areas that don’t look a bit like water,” Buchanan said in his testimony.

“They look like land, and they are farmed, but by defining them as ‘waters of the U.S.’ the rule would make it illegal to farm, build a fence, cut trees, build a house, or do most anything else there without first asking permission of the federal government and navigating a costly and complex permitting regime.”
Buchanan also highlighted EPA’s misleading advocacy for its own rule, using public relations and social media campaigns to garner support.

WOTUS Burdens Farmers
“Regardless of whether you supported, opposed or never heard of the waters rule, I hope many of you would agree that this is not how rulemaking should be conducted,” he said.

Regulations like WOTUS hinder the American farmer’s ability to produce food and fiber for the world.
“We have the ultimate regulator, and that’s the American consumer,” Buchanan said. “Regulations will do nothing but handcuff us and handicap us. The American public today enjoys the most abundant, the highest quality and the most affordable food sources they’ve ever had. That’s a result of American agriculture meeting the need of the market.”

Buchanan ended his comments by thanking Sen. Jim Inhofe, chairman of the Environment and Public Works Committee, for his tireless efforts to support Oklahoma farmers and ranchers.

A copy of Buchanan’s testimony can be found here
http://www.fb.org/tmp/uploads/buchanan-agstatement-senate16.0412combined.pdf.

Jackson County farmer-rancher Tom Buchanan was elected president of Oklahoma Farm Bureau Nov. 16, 2013, at the organization’s 72nd annual meeting in Norman. Buchanan runs a cow-calf operation and grows wheat and irrigated cotton on his farm near Altus. He also raises cattle in a family partnership with his brother and sister. Buchanan serves as the general manager of the Lugert-Altus Irrigation District and represents irrigation water use interests as vice chairman of the Oklahoma Water Resources Board. Buchanan has been a Farm Bureau member since he was 16 years old and has been active on the Jackson County board for more than 20 years, representing the county on numerous state Farm Bureau committees. He also served on the Oklahoma Farm Bureau Board of Directors for six years representing District 2. Buchanan is a 1974 graduate of Altus High School. He graduated from the University of Oklahoma in 1979 with a bachelor of arts degree. Buchanan has two grown children: Nathan works as a petroleum engineer, and Catie is a registered dietician.