Ginger and Sharion Croom spent a portion of their childhood growing up in a small white farmhouse that stands about 100 feet from the shop at L&G Farms in Southeast Missouri. After the sisters married, their husbands – Harland Gilmer and Lonnie Lawson – formed a partnership when the girls’ uncle retired in 1967.

The men farmed the family land as well as some other property until 2005 when Harland passed away. After that, Lonnie kept the operation going by himself for three more years before retiring in the fall of 2008. In 2009, two cousins, Brad Gilmer and Lance Lawson, formed their own partnership – L&G Farms – and continue to farm together today.

“The family brought us together,” Gilmer says. “We both wanted to farm. As a young boy, I used to wake Dad up on the weekend, or whenever I wasn’t in school, saying, ‘Dad, it’s time to go to the farm.’ Lance and I spent as much time as we could there learning how to drive tractors and run the disk. Our dads put us on machinery that was easy to handle and made us drive in a really slow gear. We weren’t getting much done, but we were having fun. My first real job was driving the pickup that carried 30-foot sticks of irrigation pipe. We both watched how everything was done and asked questions about why it was done to the point of being a menace at times. But that’s how we learned.”

“If we have a 21-day window before planting, we burn down with Roundup and Clarity to get a clean start. If we miss the window, we burn down with Gramoxone. Our pre-emerge herbicide program typically includes a pint and a half of Warrant and, if necessary, Roundup for grass.

“We put out Nucleus O-Phos 8-24-0 – a pop-up fertilizer – in-furrow along with some calcium to help with germination and other issues. We’ve had good luck getting the cotton to grow off with this combination. Five ounces of Quadris fungicide and a generic product for cutworms also go in the furrow. Doing all of this at planting saves a lot of trips across the field. If any pigweed emerges after the cotton is planted, a shot of Liberty the latter part of May will take care of it.”
When the cotton starts getting “woody” but is still small, the Missouri farmers go underneath the crop with Liberty or Sequence. As the cotton gets bigger, they apply Valor. If grass is present, Roundup goes in the mix.

“We prefer to use a hooded sprayer with the pressure set to 20 pounds or less,” Lawson says. “Although the varieties are herbicide-resistant, we don’t want to expose the plant when it is trying to produce fruit.”

Gilmer agrees. “I would rather have a few weeds than a perfectly clean field with less yield.”

Lawson and Gilmer also are experimenting with a cereal rye cover crop to reduce weed competition, keep the ground warm, and help with erosion and soil structure. After planting, it acts as a windbreak for seedling cotton before dying off from a pre-emerge Roundup application.

Even with this well-orchestrated, comprehensive approach to weed control, Lawson and Gilmer have to hire choppers and spot spray if weeds come on strong later in the season.

“It’s still a fight,” Gilmer says. “If one pigweed survives and you don’t chop it out, there will be a circle of weeds there next year where all the seed fell out. If you happen to hook it with the cultivator, you’ll drag seed all over the field and have a stretch of weeds. We’re looking forward to getting dicamba approved for over-the-top use so we can control these weeds a little cheaper and easier.” 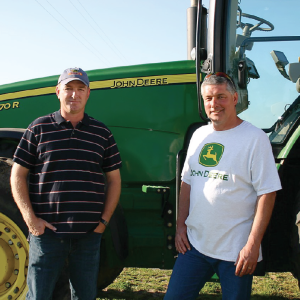 Irrigation Practices
All of the cotton acreage on L&G Farms is flood irrigated, with the exception of a couple fields that haven’t been put to grade. The initial irrigation setup is a big undertaking and requires a group effort between the farmers and their crew. Once this is accomplished, Gilmer and Lawson take a hands-on approach by checking all the units and controlling the scheduling themselves during the season.

“We have 72 power units to keep up with,” Gilmer says. “Some of the motors are attached to centrifugal pumps, and some have turbines where the pump is actually placed down in the well and has a gear head on top that we pull with a drive shaft. We have a few submersible electrics where the pump is at the bottom of the well. These are the easiest to operate, but there are only certain places where we have access to electricity.”

When setting up the flood irrigation system, Gilmer and Lawson take into consideration field size, pumping capacity of the wells and hard spots in the middles where the tractors run. For example, some wells pump 3,000 gallons per minute compared to others that pump 1,000 gallons per minute. Hole sizes in the poly pipe vary to help ensure uniformity and avoid wasting fuel and water. Smaller holes typically are punched closer to the well and larger holes further out, depending on soil type and run length.

They also have placed hard pipe underground to push water to other fields. This allows them to irrigate more acres with fewer wells, which is more economical.

Harvest, Yields And Marketing
Gilmer and Lawson have increased efficiency at harvest by running a John Deere round-bale picker that they purchased in 2015.

“It makes harvest so much easier,” Gilmer says. “I am typically the cotton picker driver, and I picked 2,000 acres of cotton with it last year. The only time I had to stop was to change a roll, grease the headers, add fuel and water, and maybe stretch my legs a bit. In my opinion, it’s the biggest advance in the cotton world since the module builder. If we get some wind and dry conditions this fall, Lance and I plan to take shifts and run it all night long.”

“There is nothing I would rather do than pick a solid white cotton field,” Gilmer says. “In 2014, we made 1,600 pounds per acre on an individual field. Our goal is to make that kind of yield on more fields. That would be nice.”

Gilmer and Lawson gin their cotton at two locations: Bootheel Cotton Co., a cooperative gin in Matthews, Mo.; and DG&G Cotton Gin in Parma. Their marketing strategy includes booking some of their crop in advance and selling the rest through cotton marketing pools.

As much as they love the crop, Gilmer and Lawson agree that growing cotton in today’s environment has its challenges.

“It’s like a child,” Gilmer says. “Once you have one, you have to take care of it until it is grown. It’s labor intensive.”
But on the reward side, Lawson points out, “It’s the biggest grossing crop we have. If we are able to produce a 1,500-pound crop, we can pay some bills and catch our breath.”

Gilmer adds, “And in the end, you can be proud of yourself. We like cotton and hope to keep growing it for a long time.”