Observing canopy characteristics during the growing season is a good way to understand the plant’s response to its environment. Occasionally, portions of the canopy may develop reddish-purple or red tones. This publication describes this phenomenon and discusses possible causes for this shift.

Leaf color is determined by pigment content and concentration. Pigments commonly present in cotton leaves include chlorophylls, carotenoids, tannins and anthocyanins. Differences in pigment properties give each pigment color characteristics; for example, chlorophylls a and b absorb light in the blue and red regions while reflecting light in the green. Similarly, carotenoids are visually associated with yellows and reds, tannins with browns, and anthocyanins with reds and purples. 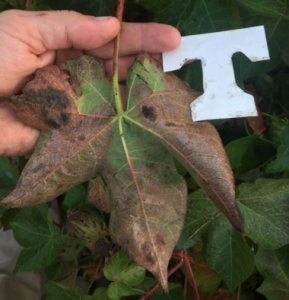 Fig. 1: An inverted leaf which has been shaded by a Tennessee T shows an increased production in anthocyanin in areas exposed to direct sunlight.

The content and concentration of these pigments can additionally provide insight into the plant’s current or past growing conditions. For instance, reddening of a leaf can indicate the plant has experienced abiotic or biotic stress such as excessive radiation (Fig. 1) or a nitrogen (N) deficiency (Fig. 2). Since changes in pigments within the plant also changes the color of the leaf, visual observations of the canopy collected through the growing season can be used to gauge plant health. In the case of a reduction of chlorophyll due to an N deficiency, a reduction in chlorophyll is directly associated with a shift from dark green to light green leaf color. Whether used subconsciously or consciously, pigment content and concentration has been used for hundreds of years to diagnose stresses, including nutrient deficiencies, disease, pest damage, and water deficits/excesses.

What pigment causes the red color in cotton leaves?
The main pigment associated with red colored leaves in cotton is anthocyanin. This pigment is the same compound which produces the red color noted in deciduous forests in the fall before they shed their leaves. Depending upon the cause of the reddening and timing during the season, the color may be caused by either an increase in anthocyanin content or by a reduction in green chlorophyll content which otherwise masks the red color of anthocyanin.

Anthocyanins become more apparent (and therefore, leaves appear more red in color) when exposed to light after periods of stress or during periods of senescence. In cotton, anthocyanin is thought to:

When are red leaves not a concern?
The presence of ‘reddish’ leaves in your crop does not always justify action or indicate yield has been lost. An example of this is an increase in anthocyanin during senescence (Fig. 3). 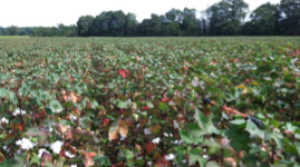 Fig. 3: Red leaves commonly appear late in the season as leaves age or plants begin to senesce. When occurring very near or after cracked boll, red leaves may indicate the plant has been properly managed.

Anthocyanin serves as a phyto-protectant during this process and thereby helps improve the productivity of nutrient re-partitioning activities. Leaf reddening or even purpling late in the season is additionally promoted by cooler late-season temperatures (Fig. 4).

Senescence of the canopy is commonly observed from first open boll through defoliation. If leaves begin to turn red at first open boll, there is generally no reason for concern (Fig. 3). Red color at this stage indicates that fertilizer N has been exhausted, and that the plant will be relatively easy to defoliate because the processes leading up to leaf abscission have already begun. In contrast, lack of reddening after first cracked boll often indicates an excess of available N and/or soil moisture which may lead to excessive top growth, delayed maturity, and/or potential difficulty defoliating. 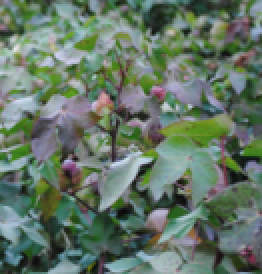 Fig. 4: Cooler temperatures noted late in the year commonly contribute to the development of red or purple leaves. Impacted leaves are most commonly mature and located on the outermost regions of the plant.

Red color in the canopy may also occur when the underside (abaxial) of leaves is exposed to direct sunlight after damage from wind or during trafficking the field (Figs. 1 and 5). Little can be done to prevent wind damage, but a few adjustments prior to trafficking the field can reduce the amount of canopy impacted by the event. After the plant has reached a height which prevents ground application rigs from safely crossing the crop, traffic should be limited. If the crop must be trafficked, chains, hoses, and/or sharp edges which intercept the crop should be relocated or fastened, and speed should be reduced to prevent unnecessary damage to the crop.

Under certain circumstances, it is thought that excessive radiation can additionally cause an increase in anthocyanin in the upper side (adaxial) of leaves (Fig. 6). Prolonged periods of cloudy or rainy weather followed by an abrupt shift to clear, high-irradiance conditions may trigger this response. Similarly, rain or irrigation events followed immediately by periods of high temperatures and sunlight may cause ‘sunscald’. Other phenomena causing leaves to increase anthocyanin production are generally more localized. Chimera, a genetic mutation which is occasionally noted in cotton leaves and bracts may cause a visible increase in anthocyanin in certain areas of the leaf (Fig. 7). Additionally, lightning strikes occasionally occur and damage vascular tissues and other cellular structures (Fig. 8). If this occurs early in the season, plants contained within the circular or slightly irregular area may die shortly after the strike. Later in the season, strikes typically result in the rapid death of the apical meristem and upper vegetation while subtending and mainstem leaves at lower nodes are not terminated but are characterized by an increase visible anthocyanin.

Fig. 5 (A&B): Wind may flip leaves exposing the abaxial side to direct light. When this occurs, anthocyanin production is increased as a method of dissipating excessive light energy and protecting cellular structures. This response is also visible in Fig. 1. 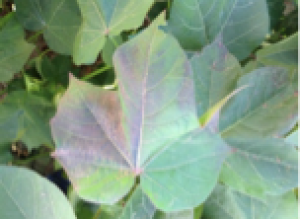 Fig. 6: Anthocyanin occasionally becomes visible in the sunlit portion of the adaxial side of leaves located on the outer regions of the canopy in response to excessive radiation.

Fig. 7 (A&B): Specific genetic mutations called chimera are occasionally noted in the cotton leaves and bracts and may cause anthocyanin in localized areas to become more evident.

When are red leaves a concern? 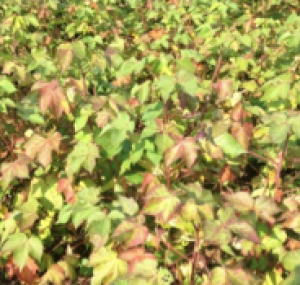 Fig. 9: Premature cutout (period in which reproductive growth becomes more dominant than vegetative growth) and senescence due to a severe nitrogen deficiency or water deficit can cause severe chlorosis and an increase in anthocyanin content in much of the canopy. Reddening may appear uniformly across the leaf or may progress inward from leaf edges.

If reddening occurs on the upper-side of canopy leaves (adaxial) prior to- or during the effective flowering period, the cause should be determined and addressed within the current season or adjusted for the following season to prevent the stress from recurring. A common cause of red leaves early in the season is premature senescence due to a nutrient deficiency of N, phosphorus (P), potassium (K), or magnesium (Mg). This process is exacerbated by water stress. Similar to senescence later in the year, nutrients are re-mobilized from the leaves during periods of deficiencies, chlorophyll content declines, and anthocyanin synthesis is increased. If severe, the deconstruction of otherwise productive photosynthetic structures in an effort to support boll development early in the season will reduce the number of fruiting structures set and harvested.

Symptoms of an N deficiency will first appear in the lower leaves as uniform yellowing. By the time leaves shift from light green to red and symptoms are noted in the upper canopy, it may be too late in the growing season to consider a soil-applied application of N to ameliorate the stress (Fig. 9). In-season foliar applications of N may be considered but these do not typically support complete recovery from a substantial N deficiency. Although K is also mobile within the plant, K deficiencies may be noted first in the upper canopy as edge-of-leaf, interveinal chlorosis. Anthocyanin within these affected regions of the leaf may become prominent (Fig. 10). Some varieties appear to be more prone to displaying K deficiency symptoms, but visual ratings do not always relate to yield. Phosphorus is also mobile within the plant, and deficiencies are characterized by purpling of the lower leaves. 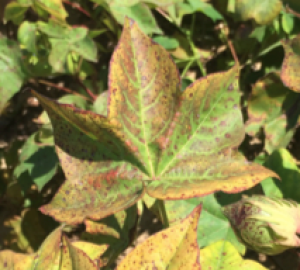 Fig. 10: Potassium deficiency in cotton is typically associated with interveinal chlorosis beginning at the leaf edges, but as the deficiency progresses leaf edges may turn red or necrotic.

Bronze wilt (Fig. 11), a disease of cotton commonly associated with a reddish-copper leaf color, has become less common in recent years due to planting shifts to less susceptible varieties. Other manageable stresses which can trigger an increase in anthocyanin production or degrade other pigments include herbicide injury and spider mite infestations (Fig. 12). 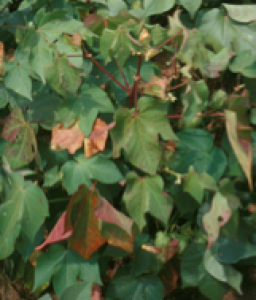 Fig. 11: Bronze wilt is a disorder in cotton which results in a reddening of the upper canopy. Photo courtesy: Dr. Owen Gwathmey

Fig. 12 (A&B): Spider mite injury may first appear as white or yellow stippling but can increase the visibility of anthocyanin, especially under dry conditions. Interveinal areas near the center of the leaf or at leaf folds are typically impacted. Photos courtesy: Dr. Scott Stewart

The synthesis of anthocyanin is commonly increased after leaves are exposed to light following multiple abiotic and biotic stresses. Subsequently, anthocyanin may become visible at multiple times through the growing season. When leaf reddening appears late in the season, it commonly indicates a crop has been properly managed. However, leaf reddening occurring earlier in the growing season may indicate the crop has or is experiencing some type of stress. Producers should be vigilant in determining the cause of the stress and ameliorating it within the current season, if practically possible. Otherwise, causes such as nutrient deficiencies should be corrected before the following growing season. Understanding the cause of a color shift in the canopy will guide input decisions and can therefore prevent unnecessary costs and/or increase yields.