Editor’s Note: Part 1 of this series is available here.

The West and the Southwest are areas of the Cotton Belt that typically experience water shortages. Instead of giving up on trying to irrigate their crops, cotton farmers have adopted systems to make the most of the water that they have.

“California is the only state that has to rely fully on irrigation to meet crop water needs,” says Bob Hutmacher, University of California Extension cotton specialist. “We are growing cotton in a dry environment with essentially no chance of rainfall during most of our cotton-growing season. Arizona growers may get growing-season water from monsoon rains, but there is little chance of that for most California producers.

“In the past, when we had more consistent, favorable water supplies, better quality water, and weren’t competing as much with permanent crops, furrow irrigation was a typical system used by cotton farmers. Today, we still have large acreages of level basin irrigation – a type of border system – on land well suited for it, such as the finer-textured lake bottom land in the San Joaquin Valley. For these specific soil types, soil characteristics allow this ground to be irrigated quite efficiently at low costs with the level basin system.” 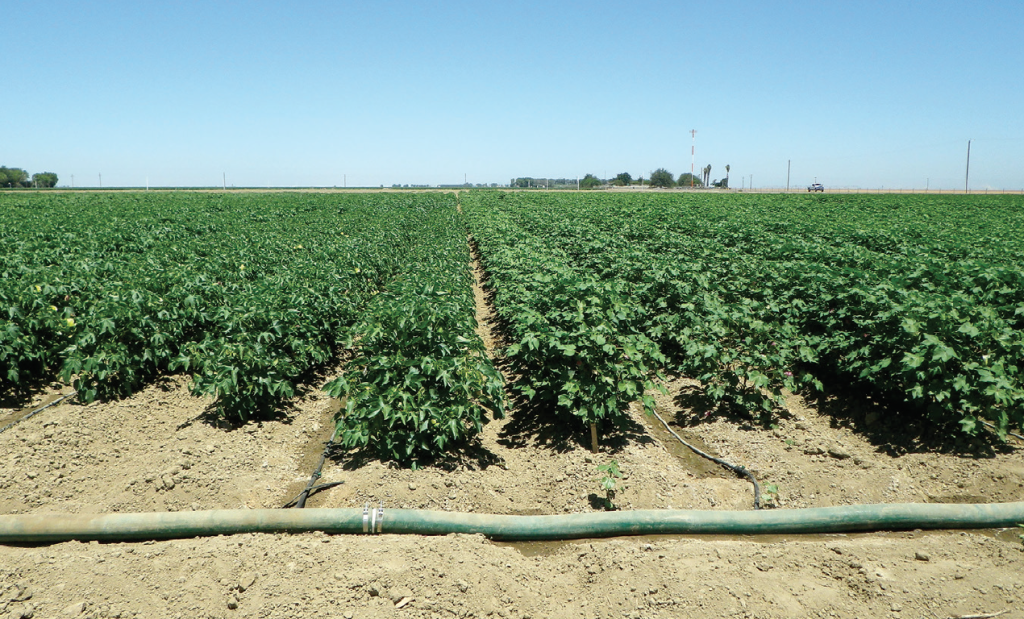 In the San Joaquin Valley where most of California’s cotton is grown, water availability has been a chronic problem for the past 10 years and is tremendously variable by water district. Water costs can run anywhere from $35 per acre-foot on the low end to high-end costs in excess of $400 per acre-foot. Moderate to high yields are needed to cover the cost of production. When high water prices are combined with water availability problems, many farmers in recent years have been forced to use deep groundwater wells for irrigation. Even then, portions of the wells have good quality water and others have moderate to poor quality water with salinity and boron issues.

“Cotton has a lot of competition for good quality water from other more valuable agronomic crops, such as nuts, fruits, processing tomatoes, garlic, onions, alfalfa and corn for the dairy industry,” Hutmacher says. “In some ways, this is where cotton’s versatility shines. Because cotton tolerates water stress and salt more than some of these crops, farmers can irrigate the crop with less water and with water from secondary water supplies, such as groundwater wells.”

Drip Irrigation Systems
In the past few years, many farmers installed subsurface drip irrigation systems, particularly in heavy soils, for crops such as tomatoes, which pay well. That same system can be used when they go into a cotton rotation. Others have turned to temporary, lower cost surface drip systems. Filter stations are placed on portable skids and can be moved around with forklifts. Where water availability is an issue, this type of system allows farmers to be as judicious as possible with their water use.

Sprinkler Irrigation Systems
The solid set pipe sprinkler system is used in medium- and coarser-textured soils mostly in Kern County. Farmers typically choose this strategy where they have vegetable crops in rotation with cotton. Pipes are set out in the field and left for the season. In western Fresno County and Kings County where cotton is still grown, farmers often do pre-plant irrigations with hand move sprinklers that allow them to put on small amounts of water – 3, 4 or 5 inches – to carry plants through early, low-water-use periods while reducing potential for leaching losses. Sections of aluminum pipe are carried into fields, put together and moved around in sets to irrigate all of the acreage. In such fields, sprinklers may be switched to furrow irrigation for remaining irrigations.

“Farmers who use this irrigation system are trying very hard to be efficient with water use because it involves a lot of hard work and expense,” Hutmacher says. “California is not unique in trying to be efficient with water use, but we are in a situation where the drought has been so persistent and there is almost zero probability that farmers will get rainfall during the growing season.”

“Today we are looking more extensively at the soil moisture profile because cotton is a deep-rooted plant,” he says.

“In soils that have high water-holding capacity, cotton extracts water from deep in the soil profile later in the season.

This means that farmers don’t have to irrigate as much during this time since the plant can get water through its roots deep in the ground. Examining the soil moisture profile works best in clay soils and clay loam soils but can be harder to interpret in coarser-textured soils.” 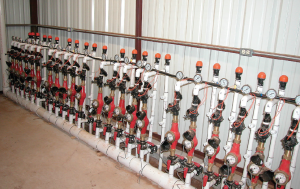 Subsurface drip irrigation has had a high rate of adoption in water-limited, cotton-growing areas of Texas. Typically, this technology uses less water with good results than other irrigation systems. Farmers are often eligible for NRCS EQIP cost-share money to help offset the high installation cost. A high concentration of experienced subsurface drip irrigation designers and dealers are available to assist farmers who want to use this strategy.

“We typically don’t have enough water to deliver to the cotton plant when it needs it the most,” says Jim Bordovsky, research scientist and agricultural engineer, Texas A&M AgriLife Research and Extension Center in Lubbock. “In the Southern High Plains, our highest rainfall months are May and June. Early in the growing season, we can over irrigate with a pivot assuming that all water is stored in the profile for current or later use. However, we’ve found that much of that water will be lost to evaporation. Also, by watering too much early in the growing season under pivot, we can create a cotton plant that is much larger physically than we can support through the entire growing season with the water that we have.

“Because subsurface drip is underground, it is not subject to as much evaporation loss. Currently, we are studying how much and at what time to apply irrigation with a subsurface drip system to optimize crop response to our limited water available. We want to have enough water in the ground to germinate the cotton plant. If it has rained, we may not have to apply as much water. In other cases, we may have to run the drip system longer to wet up the ground in order to plant.”

With any system, achieving uniform irrigation is important. Because subsurface drip is contained and pressurized, and precise control is possible, companies that specialize in this technology can design a system to achieve this goal. Factors taken into consideration include flow rate, emitter size and spacing, and elevation change.

Subsurface drip irrigation is an efficient delivery tool, and some cotton farmers have achieved very high yields – more than 4 bales per acre in certain instances – using this technology. One issue to be aware of is manganese oxide deposits that originate in the well and precipitate into the water that flows through the drip system. “Ten years ago, we didn’t know what was clogging one of our systems,” Bordovsky says. “When we discovered it was manganese oxide deposits in the drip emitters, we chlorinated the well to clean up the bacteria and then injected hydrogen peroxide into the water – in addition to lowering the pH to 7 – to clear out the drip lines.”

Manganese may not be present in all wells on a farm, and the level of manganese in well water can change over time. Before investing in a subsurface drip irrigation system, Bordovsky suggests the farmer check his water quality prior to installation. If high levels of manganese are present in well water, options to prevent clogging (and their related costs) should be carefully evaluated.

Rodent Pressure On Drip Tape
Cotton farmers using subsurface drip irrigation systems must also be cognizant of rodent pressure on drip tape. “Where we have acres and acres of cotton, rodents generally are not as much of a problem,” says Dana Porter, Texas A&M AgriLife Extension Service in Lubbock. “Rodent damage is more likely to appear when cotton is planted near good rodent habitat, such as a sorghum crop or CRP ground. These pests gnaw on the irrigation tape, puncturing or destroying the tape. Because the damage is underground, identifying the problem, locating the damage and repairing the tape can be especially problematic.

With good planning, a subsurface drip irrigation system can be beneficial to Texas cotton farmers.

“Two critical factors associated with having a successful system are hiring an experienced company to design the system for a particular farm and clearly understanding what the maintenance of that system should be,” Bordovsky says. “By following these guidelines, the system should continue to work well for a long time.”