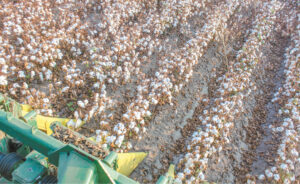 Cotton farmers who spoke at a University of California workshop described a variety of practices to build soil health, including use of cover crops and reduced tillage — photo by Cecilia Parsons

California cotton growers have often dreamed of finding themselves in tall cotton. These days, they might just find themselves in a tall cotton cover crop—as high as 5 or 6 feet, according to one expert on the value of cover cropping to improve soil health.

That expert was among speakers at a University of California workshop organized by UC cropping systems specialist Jeff Mitchell. During the event, he posed a rhetorical question: “How do we get to $2.50 a pound cotton in the San Joaquin Valley?”

He conceded that’s an optimistic figure—”perhaps overly optimistic”—but his aim was to trigger a discussion on how to see higher returns.

Cotton has been pegged at around 62 cents per pound, he said, a price that makes turning a profit challenging.

Farmers who spoke during the virtual meeting included Gary Martin with Pikalok Farms in Mendota, John Teixeira with Lonewillow Ranch in Firebaugh, Derek Azevedo with Bowles Farming in Los Banos and Nathaniel Siemens of the Rodale Institute in Ventura.

It was David Lamm of Greensboro, North Carolina, project manager with the Soil Health Institute, who talked of crop covers as high as 5 or 6 feet. He advocated minimizing disturbance of the soil, maximizing diversity of plants in rotation cover crops, keeping living roots in the soil as much as possible and keeping the soil covered at all times with plants and plant residues.

Rebecca Burgess, executive director of Marin County-based Fibershed, said she favors many of the same approaches, as well as application of compost.

She described a C4 Brand Collaboration, the California Cotton and Climate Coalition, which seeks to move away from synthetic nitrogen and deeper into natural integrated pest management, untreated seeds, reduced soil disturbance and keeping living roots in the soil.

Cala Rose Ostrander of the People, Land and Life Foundation in Colorado discussed the importance of rebuilding carbon stocks in cotton-producing landscapes, taking carbon from the atmosphere and supporting farmers seeking alternatives to synthetic inputs.

“Planting and tillage practices need to be aligned with cotton management,” Martin said.

In his discussion of soil health, Teixeira said, “Microbes are the future; keep them alive, they work 24/7.”

He referred to peas as a cover crop with a nodule that’s “like a nugget, capturing atmospheric nitrogen; it’s like money, eliminating synthetic nitrogen.”

Teixeira described the importance of having supply sources close. He accesses dried dairy manure for compost and seeks to have it no more than 25 miles from his operation, to keep trucking costs down.

Azevedo explained that Bowles Farming uses 70 species of California native plants and has its own nursery.

“Yield,” he said, “is the ultimate finish line,” adding that healthy soil practices maintain or even improve yields.

Siemens referred to grazing sheep, used to help remove the cover crop when the time comes to do so, as “unpaid interns.”

After the sheep do their thing, the next steps are to mow and mulch. He said his organic Rodale operation is also looking into other means of removal through defoliation, including heat and steam.

A cover crop also helps cut down on weeds, he said.

Crum said he works with farmers to achieve both short- and long-term goals and to “see their production system differently.”

In addition, speakers said, reduced tillage passes mean less wear and tear on equipment and less use of fuel and labor.

Mitchell closed the meeting with a talk about 20 years of soil management research conducted at the UC West Side Research and Extension Center in Five Polnts.

Annual cover copping has added 37 tons of organic matter and captured 15 tons of carbon per acre with use of about 12 inches of water, he said.

(Dennis Pollock is a reporter in Fresno. He may be contacted at agcompollock@yahoo.com.)