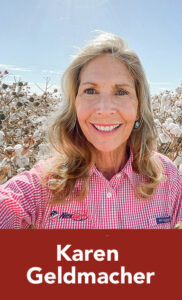 It wasn’t like I hadn’t seen cotton all my life growing up in the Desert Southwest. I just didn’t expect it to become my life.

I signed up for Ag Econ 313, Economics of Futures Markets, while planning my senior year with my college adviser. It turned out to be my favorite class. And, as an aside, all the popular aggie guys were in the class.

I didn’t have a car at college, so my dad told me to make friends with people who had cars. If I wanted to go home for a visit, I could usually find a ride with one of the guys in the econ class who was going the same direction.

One weekend, I hitched a ride with someone who drove through the heart of Arizona’s cotton country, Pinal County. My tour guide was great, and along the way I learned about varieties, management, harvesting and marketing “oro blanco,” Arizona’s white gold.

As chance would have it following college, my first job was working for the Natural Resources Conservation Service designing water systems for cotton farmers in Pinal County. At that time, we used steel tapes, wooden stakes and a survey instrument to plot cuts and fills for level basin irrigation systems on thousands of acres.

There were no lasers or GPS. I wore out lots of boot soles on those dusty fields. The farm fields and miles of concrete ditch line anchored farming friendships that have lasted a lifetime.

Shortly thereafter, I married a cotton farmer. Farm living was the life for me. We had pocket mice in my kitchen silverware drawer, rattlesnakes under the porch steps and dust storms that would block out the sun.

I’ve been rattled out of bed in the middle of the night by a Grumman Ag Cat barreling down on the bedroom window, lights as bright as the sun and a motor sounding like the engine of a train. A few crops later, I remember sleeping through the smooth swoosh of the Thrush turbines as they made their GPS glide over the rooftop like an E ticket ride at Disneyland.

We grew many different cotton varieties over the years. DP90 was one of them. It was a great variety, but I would say a prayer before walking into the fields to gather petioles in July and August. You could get lost under the towering lateral branches. I prayed I’d be found alive if I disappeared in the growth and didn’t make it home.

We persisted during rough times in Arizona with pinkies and whiteflies. I still have t-shirts that say, “I survived the pink bollworm” and “I ate my share of whiteflies today.”

But there were the great years, too — watching our kids dig for planted seeds, learn to drive tractors, swing bug nets and pick cotton.

Even the tough parts are good to reflect on, like the time I jackknifed a cotton trailer. We hauled the trailers 40 miles from our farm in Stanfield, Arizona, to Producers Gin in Coolidge. I braked for a stop sign and jackknifed the truck and trailer on a rural dirt road outside Casa Grande. I was rescued by a kid in a Ford Pinto who eventually became one of our county agents.

I later spent a few years outside the cotton industry teaching community college agriculture. I would buy my students lunch if they would travel with me on the days I did plant mapping. It was a way I could get some help pulling plants and recording data.

Rattlesnakes are not real common in Arizona cotton fields, but one afternoon my helper and I got a bit closer than planned to one. We both scrambled out of the row like lightning, each taking a different route.

I’m retired from teaching now and spend my cotton days with Americot as their germplasm specialist for Arizona. It just so happens that my customers are some of those popular aggie guys from my ag econ class at the University of Arizona.