The forecast of rains for Texas this week will be music to many farmers and ranchers ears, but the coming stormy weather is not the main El Niño event, according to a climatologist.

Texas is sure to get some rainfall, Nielsen-Gammon said. There’s an upper-level disturbance moving into the southwest, and a tropical cyclone in the Pacific off the coast of Mexico should feed some moisture into the state. Though El Niño may be contributing to the storms, it’s not the beginning of the main activity: the near-normal to wetter-than-normal fall and winter that climatologists are expecting.

“Everything is impacted by El Niño in some way or another,” he said. “Some aspects of this weather pattern are consistent with what we expect with an El Niño. We have a fairly active subtropical jet stream developing, which is what brings the wet weather to Texas in the wintertime. The tropical cyclone activity over the eastern Pacific is also characteristic of El Niño.”

But the coming wet weather doesn’t mean things have been normal so far, he said. At least 22 counties in Texas have received record low rainfall in the past 90 days. Rainfall the third week in October may help, but it is only expected to average about 2 inches statewide, which may not be enough to end the drought many parts of the state are experiencing.

“In Texas, we never really have ‘normal’ weather,” Nielsen-Gammon said. “But some of the strongest El Niños in the past have been associated with dry Septembers and Octobers. So it’s not too surprising this time around that we have to wait until later in October for enhanced rainfall chances. That’s actually how it normally works. We don’t usually get a big impact from El Niño until the jet stream is far enough south to affect our weather.” 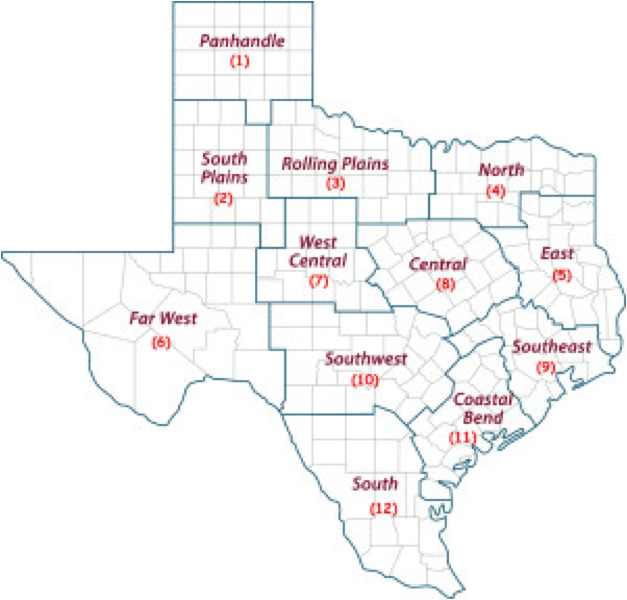 Central: Soil moisture, rangeland, pastures and crops were in poor condition. Livestock remained in good condition with supplemental feeding. Cold fronts moved through the region, bringing lows in the 50s and highs in the 80s, but the region remained extremely dry. Winter grasses needed rain, as did crops, stock tanks and rivers. Irrigated small grains were under attack by armyworms. The dry weather along with windy conditions raised the risk of grass fires.

Coastal Bend: The region had warm, dry weather with low humidity. The wildfire danger was high, and burn bans were instituted in most counties. Most row crops and rice fields were readied for the fallow season. Winter pasture planting slowed as producers waited for improved soil moisture. Pastures were suffering due to dry conditions. Pecan growers were harvesting and reporting fair yields. Fall cattle work was underway, and calf sales were brisk.

East: With no measurable precipitation, drought conditions continued to worsen throughout the region. Pastures were drying up. Most counties rated pasture and rangeland conditions as poor or very poor. Only a few counties reported adequate subsoil and topsoil moisture; most reported short or very short conditions. With low humidity and strong southwesterly winds, the wildfire danger was extremely high. There were wildfires in Gregg and Marion counties. Some pastures were evacuated due to lack of water for cattle to drink. Abnormally warm temperatures decreased forage quality. Producers were waiting until rain was in the forecast to plant winter forages. Many producers were feeding hay and supplements earlier than usual. Some producers were already running short on hay. In Trinity County, producers were baling pastures despite an abundance of weeds; others continued to buy hay out of the region. Livestock were in good condition, though some cows were beginning to lose weight due to poor grazing. The cattle market remained down. Producers continued to wean calves and cull cows.

Far West: Cotton harvesting was either in full swing or about ready to start after producers applied defoliants. Most grain sorghum had to be sprayed for sugarcane aphids. Alfalfa growers were taking the last cutting. Onions started to emerge. In Pecos County, about half the cotton was still producing bolls due to late replanting caused by a hailstorm. In Presidio County, rain totals varied from 2 to 4 inches and caused flooding along the Rio Grande River. Producers continued to feed livestock and wildlife. Bucks and rams were put out to pasture and will remain out until early December. Pasture and range conditions varied widely throughout the region.

North: The drought worsened. Topsoil moisture was short to very short, and the wildfire danger was high. Most small grain farmers were waiting for wetter conditions before they started planting. Some ranchers planted winter annual pastures, hoping for rain soon to bring the crop up. A few producers were baling late-season hay, but the quality was poor. Though much of the hay baled this year was of low quality, supplies were judged adequate to get most operations through the winter. Some producers were feeding hay already. Cattle were straying off pastures in search of better grazing as forages became scarce. The cotton harvest began. Stock-pond levels dropped. Highly variable temperatures stressed livestock. Feral hog activity increased. Armyworm reports slowed.

Panhandle: The region was dry with cool nights and warm, windy days. Rain was needed throughout the region. In Collingsworth County, the warm, dry weather aided peanut harvest. Much of the peanut crop had been dug, and yields were expected to be average to slightly above average. Late-planted cotton was catching up in maturity, and harvesting should begin soon. Wheat planting was stalled until more moisture was received. Deaf Smith County producers were trying to continue harvesting crops. After the rain of 1.5 to 4 inches the previous week, fields were just beginning to dry out enough for equipment not to be bogged down. Silage choppers were running, but only with the help of tractors pulling trucks through the field. The corn harvest resumed on drier fields. Producers began planting winter wheat again, and the earliest planted wheat was up and looked good. There was some grain sorghum being harvested with good yields. The Hall County cotton harvest began. Yield and grade reports were promising. Rain was needed for pastures and wheat. Except for cotton, the Hansford County harvest continued. A large part of the corn crop had dried out. Dryland sorghum was making from 1,000 to 1,500 pounds per acre, and irrigated corn for silage was making as much as 3,000 pounds per acre. Ochiltree County wheat growers were planting at a rapid pace. Germination and emergence of wheat was excellent due to previous rains and warm temperatures. The dry weather and warm temperatures also meant the corn, sorghum and soybean harvest could continue at a brisk pace. Yields were excellent, though some sorghum fields had lodging. Forage supplies were excellent going into winter, and most haying operations were done. Cattle were in excellent condition. Oldham County ranchers were shipping cattle off pastures to feed yards. Early planted wheat looked good. Randall County weather was also ideal for harvesting. The corn harvest was nearly complete with average yields — from 160 to more than 200 bushels per acre. The sorghum harvest was in full swing, with yields averaging from 4,000 to 6,000 pounds per acre. Cotton harvesting began.

Rolling Plains: Some areas received light showers. The storms were accompanied by lightning that caused a few grass fires that were quickly contained with the help of the rain. However, the rain wasn’t enough to help pastures much but settled the dust for a day or two. With cotton opening bolls and harvesting beginning in some areas, moisture wasn’t what farmers wanted. Only a few farmers had defoliated their cotton crop and began stripping cotton. However, cotton harvesting was expected to be in full swing within a week or two, depending on the weather. With forecasts calling for an El Niño winter, ranchers hoped there would be enough moisture to help get this year’s wheat crop up and ryegrass winter pastures going. Many farmers decided to sow part of their wheat acres despite extremely dry soils and record-breaking high temperatures in the upper 90s. Many of the records broken were set 30 to 50 years ago.

South Plains: The Floyd County cotton harvest started. Most cotton was already sprayed with defoliants — or will be sprayed in the next few days to a week. Lubbock County had drier but cooler fall weather, allowing harvesting to resume in grain and cotton fields. About 40 percent of the county’s cotton fields were defoliated. Cotton grades thus far showed good staple and micronaire. Cochran County topsoil and subsoil moisture remained adequate. Garza County got rain, from a trace to nearly 0.5 inch, which interrupted the cotton harvest for a few days. The harvest resumed soon with better than anticipated yields. Temperatures were abnormally high for the season, ranging in the 80s and 90s until late in the reporting week. Range and pastures benefited slightly from the rainfall, but more was needed to help forage production. Livestock were in excellent condition. In Mitchell County, the cotton harvest was in full swing. Producers were spraying and stripping, trying to get cotton out before winds or heavy rains damaged the cotton. After last week’s rain, much more wheat was planted. Producers planned to continue planting ahead of the upcoming rains. Scurry County was still dry, and producers hoped for the forecasts of rain to be true. Some cotton was defoliated, and harvesting began.

Southeast: Soil moisture throughout the region varied widely but was mostly short to very short, with very short being the most common. Rangeland and pasture ratings varied from fair to very poor, with poor ratings being the most common. The area remained rainless, but temperatures became more moderate. Some producers began planting winter pastures in hope of receiving rain soon. Burn bans were in effect in most counties. Stock-tank water levels continued to drop. In Fort Bend County, the cotton harvest was wrapped up, and row crop producers were working to get land in shape before the expected winter rains. Pastures and hay fields were very dry. Livestock were in fair to good condition.

Southwest: Some areas received from 1 inch to 10 inches of rain, but for the most part, the region remained hot and dry. Initial cotton harvest numbers indicated higher yields than expected. Small grain growth for grazing was slowed by lack of moisture. Livestock struggled with internal parasites and the lack of green vegetation.

West Central: The region continued to have hot, dry, windy days with mild, cool nights. Record high temperatures and strong winds added to the already high wildfire danger. The cotton harvest was underway and expected to be in full swing within a week. Producers continued to prepare for fall planting, including applying fertilizers to small grain fields. Some producers dry-planted wheat, but saw little to no emergence to date. Wheat that did emerge was struggling due to lack of moisture. Most producers were waiting for rain before planting either wheat or oats. Rangeland and pastures were severely drought stressed. Forage growth slowed considerably. Stock-tank water levels further dropped. Some smaller tanks were already dry, forcing producers to move livestock to locations with accessible water. Livestock remained in fair to good condition with supplemental feeding. Cattle prices were on the increase again.