Editor’s note: Cotton Farming editor Carroll Smith went into the field this fall to capture the story of farmers’ experiences with the new Deltapine Bollgard II XtendFlex varieties. Following is her special report.

In 1948, Roy Baxley bought a dairy cattle and tobacco operation in the Coastal Plain area near Dillon, S.C. His son, Roy Baxley Jr., was raised on the farm and later took steps to transform the operation to fulfill his vision. The landscape of Baxley and Baxley Farms began to change as Roy Jr. moved away from dairy and grew the row crop operation, which included several hundred acres of cotton.

Following the family tradition, Roy Jr. instilled a love of agriculture in his son, Daniel. When his father passed away unexpectedly in 2012, Daniel stepped up to take over the day-to-day operations. 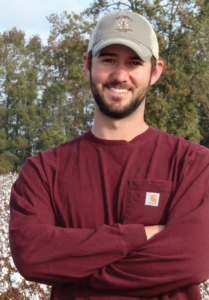 ­Dillon, S.C., cotton farmer Daniel Baxley says he is excited about planting Deltapine varieties with XtendFlex technology in 2017 to control resistant pigweed in his crop.

“As a third-generation farmer, I learned so many things from my dad,” Daniel says. “He taught me to stay patient in a tough business and respect the land. He always told me, ‘You work to live, you don’t live to work. You have to love what you do.’ When he passed away, I took over the operation in 2013 and just completed my fourth crop. In addition to cotton, I grow peanuts, corn, soybeans and a little wheat. My mom, Cathy, helps out with the bookkeeping.

“Prior to the 2016 season, Zack Webb, a technical agronomist for Monsanto, told me about a new Class of 16 cotton variety — DP 1646 B2XF — that had done really well in trials. He encouraged me to try it on some of my better ground. I took his advice and planted it on 150 dryland acres that historically produced good cotton yields.”

Off To A Good Start
After a cold snap moved out, Daniel began planting DP 1646 B2XF about May 18. He used a three-seed-to-the-hill drop method of planting the smaller-seeded variety, which resulted in good emergence, vigor and a clean uniform stand.
“We planted into a strip-till program after disking the cotton beds from the previous season,” Daniel says. “Planting conditions were optimal at that time. It was a pretty clean field. When the cotton came up, there were no gaps, and I couldn’t ask for better uniformity.”

Resistant pigweed is the No. 1 weed he battles along with sicklepod, which is beginning to show glyphosate resistance in some spots, and ryegrass. Daniel’s early herbicide program began with a Gramoxone burndown and a behind-the-planter application of Reflex and diuron. He later applied a quart of Liberty for pigweed control, followed by 25 ounces to a quart of Roundup PowerMAX. Daniel applied 50 ounces of plant growth regulator since DP 1646 B2XF tends to be a tall, growthy variety.

“We had tremendous yield potential going into August,” he says. “DP 1646 B2XF was loaded up with squares and really looked strong. I thought I would potentially harvest 2½ to 3 bales per acre.”

However, Mother Nature had other plans. A 0.2-inch rain fell the first week in August, and then conditions remained dry for the next few weeks during that crucial time when the cotton plant was trying to put on bolls.

“Even though Tropical Storm Hermine dropped a few inches of rain the first week in September, it was too late for the cotton and soybeans,” Daniel says. “We just didn’t get the moisture we needed, so we lost a lot of squares. After surveying the crop following the drought, we still thought DP 1646 B2XF had good yield potential.”

However, the late-season drought was not the end of the story. In early October, a hurricane was brewing off the Atlantic coast. Farmers in the Southeast kept an eye on its progress and worked feverishly to harvest mostly peanuts and soybeans that were ready at the time. 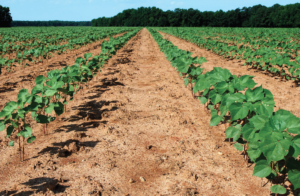 Daniel Baxley planted 150 dryland acres to DP 1646 B2XF in 2016. In June, the variety showed good emergence, vigor and a clean, uniform stand. He anticipated 2½ to 3 bales per acre yield before adverse weather set in later in the season.

“DP 1646 B2XF looked good, but we weren’t ready to defoliate when we heard about Hurricane Matthew,” Daniel says.

“When the storm hit on Oct. 9, we experienced an extended period of 50 to 60 mph winds and 12 to 20 inches of rain in places. DP 1646 B2XF was an impressive variety with good yield potential before the drought and Hurricane Matthew hit. I will keep it in my rotation for 2017.”

Bollgard II XtendFlex Technology
In addition to DP 1646 B2XF, Daniel also planted DP 1538 B2XF, DP 1553 B2XF and DP 1522 B2XF. In anticipating the new XtendiMax herbicide with VaporGrip Technology, a proprietary technology from Monsanto that can help significantly reduce dicamba volatility compared to commercially available dicamba products, he wanted to figure out which variety worked best on different soil types. Although the weather has not always cooperated, he says Deltapine has always been the best performing variety for his operation.

“When ‘strong cotton’ is mentioned, Deltapine varieties always come to mind,” Daniel says. “To me, strong cotton gets up out of the ground, has excellent vigor and performs well throughout the entire season. I look for a high-yielding variety with premium fiber quality and good turnout at the gin. I want to get the best bang for my buck.

“I also plan to plant Bollgard II XtendFlex cotton on all of my acres in 2017 to simplify herbicide sprays and get excellent weed control with dicamba. Being able to use dicamba herbicide to control resistant pigweed will be a big help. We can knock them down and keep them down.”

• Early to mid-maturity and widely adapted