Home » Web Exclusive » What is going on in the cotton market?

What is going on in the cotton market? 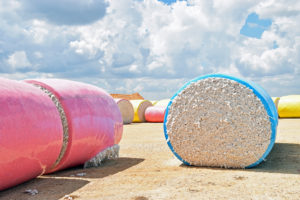 Round bales wait to be ginned in Wharton County, Texas — photo by Vicky Boyd

Demand, trade wars and global economic scenarios are all playing their part in the weak cotton market.

About 80 people involved in different aspects of the cotton sector gathered recently in the new building of Lubbock, Texas-based Plains Cotton Growers Inc. and discussed the current cotton scenario.

Cotton demand is weak, says Darren Hudson, a Texas Tech University professor of agricultural economics. This sentiment was echoed by a merchant, who said, “There are no commitments from the buyers.”

With over 4 million bales (480 pounds each) expected this season from the High Plains of Texas, slow flow of cotton would be an issue for the cotton industry.

Obviously, the ongoing trade war with China has its own influence; it may not be the only reason for the weak demand. Spinning mills have excess yarn in their possession, particularly in China and India, which will play an important role in the cotton demand.

The global economic picture is not that bright, and the Chinese economy has slowed a considerable bit.

“Global economy is plodding on but not witnessing tremendous growth,” Hudson says.

With regard to trade deals, which the United States is expected to make with other countries, there was a sense of optimism.

“I am optimistic about the United States-Mexico trade deal by the end of this year,” says Kody Bessent, vice president of operations and legislative affairs at the Plains Cotton Growers.

The expected bilateral deal with Japan is viewed favorably by the U.S. agriculture sector.

“The industry is hopeful that there will be a meeting between the United States and China, this October,” Bessent says.

Although there is a need to resolve the trade dispute with China soon, the effect will not be felt immediately as the demand needs to pick up.

The deal between China and the United States will influence the decision to plant other crops such as soybean, which may take some acres away from cotton. This adjustment can bring some correction to the cotton supply and demand.

Additionally, the excess capacity of polyester in China has to be factored into the cotton demand scenario.

It is important that the global cotton sector focus on creating more demand by thinking beyond the conventional fiber-to-fashion chain.

The addition of value to cotton products and demand creation are needed.

Dr. Seshadri Ramkumar is a professor in Texas Tech University’s Nonwovens & Advanced Materials Laboratory in Lubbock. He may be reached at s.ramkumar@ttu.edu.