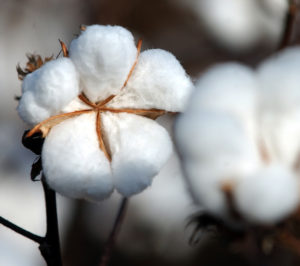 In 2019, Georgia’s farmers planted 1.4 million acres of cotton, which is the third-highest planted acreage for the past decade, down 30,000 acres from 2018. The average cotton yield is forecast at 932 pounds per acre. Production is forecast at 2.7 million bales, which would be the second-highest on record.

There are three major contributing factors to the increase in cotton acres in Georgia in recent years. First, the high cotton price in 2018 encouraged more cotton production for 2019. Second, the decline in commodity prices due to trade tension with China makes cotton more competitive with other row crops.

During the years with large production, U.S. cotton exports are expected to increase. However, exports to China, as expected, are down, and additional Chinese tariffs on U.S. cotton make U.S. cotton less competitive in the Chinese market.

World cotton production is currently forecast at 124.9 million bales, which is the highest in history. World cotton use or demand has improved in recent years, but the upward trend has slowed down for the past two years due to the uncertainty of the global economy and trade.

The current world cotton consumption is forecast at 121.7 million bales. Expanding world supplies over demand has increased the global stock-to-use ratio, which is often accompanied by a fall in global cotton prices.

Several other issues make cotton profitability challenging. In Georgia, the cotton basis since the implementation of Chinese tariffs has been lower than in previous years due to the smaller shipments to China.

The change in the size of the shipments has increased transaction costs for merchants and reduced the local basis for cotton. The other issue here is that China accounts for about 40% of apparel imported by the United States, of which 30% is made of cotton.

The 25% U.S. tariff on Chinese apparel makes it more expensive for U.S. consumers to buy cotton apparel, which reduces the demand for apparel. Moreover, the appreciation of the U.S. dollar relative to other currencies makes our agricultural products more expensive in the export market and result in a reduction of prices.

Yangxuan Liu is an assistant professor with the University of Georgia’s Department of Agricultural and Applied Economics in Tifton. She may be reached at Yangxuan.Liu@uga.edu.