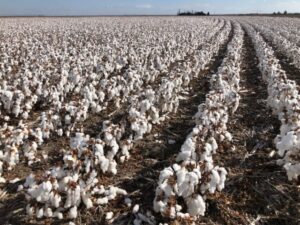 Cotton prices recently bounced back following a steady fall driven by the pandemic’s effect on U.S. and global demand, according to a Texas A&M AgriLife Extension Service expert.

COVID-19’s effect on cotton was pretty dramatic, Robinson said. Cotton futures fell more than 20 cents, from 70 cents per pound to 49 cents per pound, from February to April.

“That’s just the fears and uncertainty of pandemic, recessionary fears, because cotton demand always goes down in a recession,” he said. “Cotton represents discretionary spending on wardrobe purchases, but the pandemic added another wrinkle when you had stores physically closed by the shutdowns.”

Textile mill shutdowns in China also made a big impact on the price drop, Robinson said.

In April, the Chinese government began strategically buying bales to add to or replenish their cotton reserves, he said. Chinese reserve buying helped trigger a steady upward price march over the summer.

Robinson said Mother Nature was not ideal for the U.S. cotton crop this year. Drought in West and South Texas followed by multiple tropical storms that struck with varying severity from Texas to Georgia brought into question the projected U.S. crop size.

Tropical storms along the coast were followed by freezing temperatures, sleet and rains in the Texas Plains and Panhandle as harvest got underway, he said.

“It was a tough production year, and there were a lot of questions about yields and quality,” he said.

The bad weather also triggered price speculator buying, which helped cotton’s march back to 70 cents per pound as of Nov. 10, Robinson said.

Robinson expected U.S. yield estimates could drop as much as 600,000 bales based on weather events throughout cotton-producing states. But the Nov. 11 USDA report maintained the previous estimates of 17 million bales.

Quality could be an issue with this year’s cotton crop due to the storms, he said.

“I suspect this report means there is a lot of low-grade cotton out there and that there will be an oversupply of low-quality cotton,” he said. “You’ve got reports of wind damage, stringing, discoloration, boll rot, but it looks like a lot of acres are being counted rather than marked as a loss.”

Robinson said the projection likely means a 7.2 million-bale surplus carryover from 2020, which translates into high supplies and bearish cotton prices for the foreseeable future. The estimated surplus is the highest since 2007-2008, according to the USDA report.

The election may affect trade but the bigger question for cotton will be U.S. economic recovery, Robinson said. Distribution of an effective COVID vaccination could expedite that recovery.

“To have the November report show no change, that tells me they may be counting bolls and acres that are out there and are not predicting a cut,” he said. “These reports get closer and closer to the real number the later it gets in the season, so this report reinforces the thought that we’ll have heavy supplies and prices aren’t likely to improve much for Texas producers. And even if there is a major production cut late in the year, it still might leave 6.5 million bales of ending stocks, which is not price supportive.”