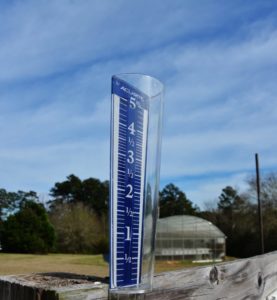 Rainfall has been in short supply for much of the state since last summer. Neutral weather patterns offer an equal chance of drier-than-normal or wetter-than-normal conditions heading into spring — Texas A&M AgriLife Extension Service photo by Adam Russell

Texas A&M AgriLife Extension isn’t the only one who’s taken notice. Dr. John Nielsen-Gammon, Texas state climatologist, said conditions have been fairly dry for most of the state since the middle of summer. Areas of West Texas and the Panhandle picked up good rainfall that ended drought conditions, but areas in Central and South Texas have been especially dry.

Tropical weather patterns are neutral, which means there are equal chances of drier or wetter systems moving through Texas.

“The majority of the state has received below-normal rainfall so far,” he said. “There are no La Niña or El Niño conditions, so there’s really no long-term outlook for how much rain we might see going into spring.”

However, short-term forecasts show no indication of breaking the drier-than-normal trend.

“Much of the state has been waiting to get decent amounts of rain into the soil for spring planting,” he said. “The lack of rainfall is definitely something to be concerned about at this point.”

Drier soil is a concern for farmers. But if drought extends into summer, it can compound conditions with higher temperatures. Dry winters tend to deliver hotter summers.

Much of the cold temperatures in Texas have been relegated to northern parts of the state, he said. The short-term forecast doesn’t call for any break in that temperature trend.

“We can still get a change in the weather pattern without a week’s warning,” he said. “Colder, wetter weather isn’t out of the question as we move toward spring.”