Recent passage of a Congressional act may bring relief to farmers who experienced crop losses due to drought in 2018 and 2019. In December 2019, Congress passed the FY2020 Further Consolidated Appropriations Act, making crop production losses due to “quality losses of crops, drought and excessive soil moisture” in crop years 2018 and 2019 eligible for Wildfires and Hurricanes Indemnity Program Plus (WHIP+).

The hope is meaningful assistance will become available to the 202 Texas counties affected; however, until the U.S. Department of Agriculture releases further information, farmers must wait to sign up for assistance.

The Agricultural and Food Policy Center, or AFPC, at Texas A&M University in College Station recently released a briefing paper for the provisions in the FY2020 Further Consolidated Appropriations Act.

Assistance that covers crop loss due to drought

“Previous rounds of assistance had focused on a variety of other disasters but didn’t cover drought,” said Dr. Bart Fischer, AFPC co-director. “But the FY2020 appropriations bill finally addressed that aspect of crop loss, making drought losses eligible for WHIP+.”

Fischer said since passage of the 2008 Farm Bill, Congress has appropriated very little supplemental disaster assistance for agriculture, but that changed with the passing of the Bipartisan Budget Act of 2018.

“In response to hurricanes Harvey, Irma, Maria and others, as well as wildfires and other natural disasters that occurred in 2017, Congress approved a $2.36 billion support package, which U.S. Secretary of Agriculture Sonny Perdue used, in part, to create the Wildfires and Hurricanes Indemnity Program, or WHIP,” he said.

“Then after natural disasters occurring in 2018 and 2019, Congress passed the Additional Supplemental Appropriations for Disaster Relief Act of 2019 that included just over $3 billion. This went toward developing the Wildfires and Hurricanes Indemnity Program Plus, or WHIP+.”

Fischer noted the FY2020 Further Consolidated Appropriations Act further stipulates “losses due to drought shall only be eligible for WHIP+ if any area within the county in which the loss occurs was rated by the U.S. Drought Monitor as having a D3 (Extreme Drought) or higher level of drought intensity during the applicable calendar years.” 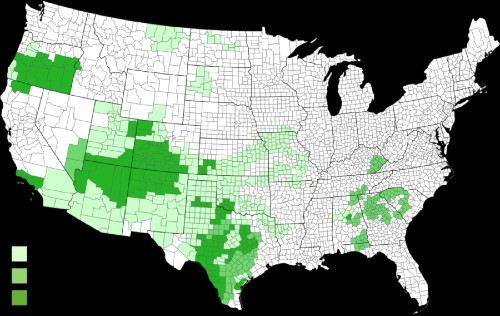 The AFPC has developed information on coverage levels, as well as a map of U.S. counties affected by drought and various drought illustration scenarios available at https://tinyurl.com/DroughtAppropriations2020.

Still awaiting implementation, but hope for a big impact on Texas farmers

ADVERTISEMENT
“This could be a big deal for a number of Texas farmers who had crop losses due to drought in 2018 and/or 2019,” he said. “However, the amount of support a producer receives will ultimately depend on how the USDA implements the bill.”

Fischer also cautioned that, until USDA announces it is time to sign up, the local county Farm Service Agency will not be able to provide any information.

“While we anticipate that WHIP+ will provide meaningful assistance for producers facing D3 or greater levels of drought across the U.S. in crop years 2018 and/or 2019, nothing is official until USDA releases the program details,” he said.