Louisiana cotton crop planted; it’s going to be a small 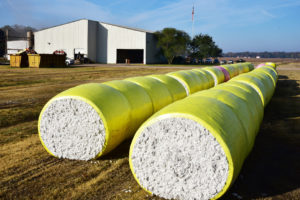 Bales of cotton wait to be ginned outside a ginning facility near Ferriday. Louisiana’s 2020 cotton crop is expected to be significantly smaller in terms of acreage as low prices have depressed the cotton market — photo by Bruce Schultz /LSU AgCenter

Louisiana’s cotton farmers have nearly completed this year’s planting, and the crop size has shrunk when compared to earlier estimates.

In early February, estimates had planting intentions for cotton around 230,000 acres, with the possibility it could be as large as 250,000 acres. Market conditions and loan availability have lowered that number considerably.

LSU AgCenter cotton specialist Dan Fromme is an eyewitness to just how small the cotton crop has become.

“When you have to plant the last part of May, the first part of June, yields aren’t quite as good,” Fromme said.

A warm April helped dry the fields and warm the soil for cotton planting, but a cooler May slowed crop development, he said.

Jay Hardwick farms in Tensas Parish, where cotton has traditionally been a major part of the landscape. His cotton crop this year is much smaller than last year’s.

“We’re about 50% down on our cotton this year,” Hardwick said. “It’s off and running. We haven’t experienced any insect or disease pressure yet, but it’s early.”

Low cotton prices just do not make it as profitable as some of the other crops, said Hardwick, who has significant acres planted in soybeans and corn.

Dennis Burns, an AgCenter agent for Catahoula, Concordia and Tensas parishes, said cotton acres in his area have taken a big hit.

“Tensas Parish usually has around 40,000 acres in cotton in a typical year,” Burns said. “Things changed in January and early February. We’re probably around 20,000 acres now.”

Justin Dufour, an AgCenter agent for Avoyelles, Grant and Rapides parishes, has had a similar experience with cotton acres.

“It’s the most condensed cotton crop I’ve seen in a while,” Dufour said. “It will probably be the smallest one in the past 10 years.”

Most farmers switched cotton acres to soybeans because soybeans seemed to stand a better chance of turning a profit, Burns said. But soybean prices are also low and come with the risk that China, the No. 1 buyer of U.S. soybeans, might not be inclined to buy soybeans from the United States.

“Cotton is a big rotational crop in our area,” Burns said. “People are taking it out of their rotation because of the economics, and that concerns me.”

To help increase the likelihood of producing good yields, cotton farmers have planted cotton on some of their better lands. Cotton is one of the more expensive crops to grow, so farmers want to help ensure the crop can succeed.

Kenneth Gautreaux is a communications specialist with the LSU AgCenter. He may be reached at CGautreaux@agcenter.lsu.edu.