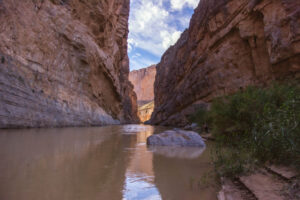 The increasing salinity of the Rio Grande River is a real problem for agricultural producers. Experts from Texas A&M AgriLife Research are studying this problem to provide options and advice for those who rely on this water source.

The Rio Grande has made agriculture possible in South and West Texas for hundreds of years or more. Today, the Rio Grande irrigates 2 million acres of land and is home to many of Texas’ agricultural state symbols. Pecans are the state tree and nut, cotton is the state fabric and fiber, red grapefruit is the state fruit and the Texas-developed sweet 1015 onion is the state vegetable.

Other crops such as sorghum, sugarcane and alfalfa might not be state symbols, but they have the distinction of contributing hundreds of millions of dollars to the state and national economy.

Agriculture along the Rio Grande

To understand agriculture along the Rio Grande, one must first understand “where the water comes from, the volume and how the water drains,” said Dr. Juan Enciso, an AgriLife Research irrigation engineer at the Texas A&M AgriLife Research and Extension Center at Weslaco. Enciso is also an associate professor in Texas A&M University’s Department of Biological and Agricultural Engineering, administered by the College of Agriculture and Life Sciences.

As the Rio Grande makes its way from its snowmelt-fed headwaters in Colorado to its outlet in the Gulf of Mexico, 80% of the water is diverted for agriculture. 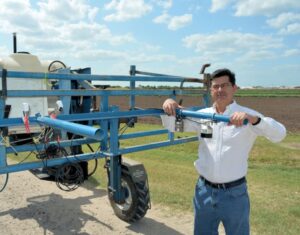 “We are a very dry state and we don’t have enough water,” Enciso said. “We have to be very careful about not overusing the water.”

Many of the crops, like pecans and alfalfa, require a lot of water, said Dr. Girisha Ganjegunte, AgriLife Research water resources and salinity management research group leader at the Texas A&M AgriLife Research Center at El Paso and a professor in the Department of Soil and Crop Sciences.

“Because of high evaporation and high agricultural operations, you need a lot of water to grow the crops,” he said. “The irrigation water depth is measured in feet here, not in inches.”

With global temperatures rising, drought becoming more common and snowpack at the headwaters of the Rio Grande decreasing, water is getting scarcer. This forces producers to choose which crops to prioritize.

“During periods of drought, people divert all that water to salvage pecan crops because it’s a tree crop, and it takes years to produce,” Ganjegunte said. “So, if you kill it, then you have to wait for 10 years again. But in the meantime, payments to the bank won’t stop.”

Ganjegunte said the water producers use to irrigate and the soil the crops grow in are saltier than many crops prefer, and it’s getting saltier still.

Salty and getting saltier

The agricultural soil along the Rio Grande is naturally somewhat salty and because of the geological formations, the groundwater tends toward saltiness. This presents a problem for both municipal and agricultural water users in the region. El Paso pulls 50% of its drinking water from groundwater. Pecan producers who can afford it drill wells hundreds of feet deep, but the aquifers get saltier as they get deeper.

Surface water, meanwhile, comes from the Rio Grande. Ganjegunte said the Rio Grande’s water is “pristine” at its headwaters in Colorado. By the time the river reaches El Paso, the salinity of the water is above 1,000 parts per million. Water above 1,000 parts per million is not fresh and, while still safe to drink, is above secondary drinking water standards.

As the Rio Grande’s water journeys toward the Gulf of Mexico, it passes through both urban and agricultural land. Booming populations on both sides of the border means more people are using water softeners. Water softeners are salts that are discharged with wastewater. Because wastewater treatment doesn’t remove salts, they all end up in the river.

Meanwhile, on agricultural land, salt-containing fertilizers can enter the river through drainage. As that water is used for irrigation, more salt is put into the soil.

“It’s a combination of different things: population growth, more wastewater, more softeners, fertilizers,” Ganjegunte said. “So, over time, the salinity is going only up and up and up.”

Rain and the Rio Grande

If enough freshwater comes into the soil regularly, such as from rain, salt is leached out of the soil, said Dr. Genhua Niu, AgriLife Research professor of urban agriculture at the Texas A&M AgriLife Center at Dallas. But along the Rio Grande, rain can be hard to come by. 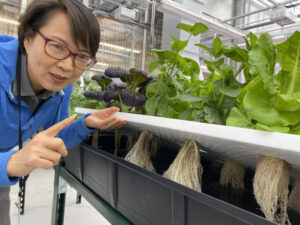 El Paso County, for example, has an annual precipitation of nearly 9 inches. Potential evapotranspiration — how much evaporation there would be if enough water were available — is around 78 inches, Ganjegunte said. That means on average the local climate is capable of evaporating nearly nine times more water than the amount that actually rains down each year.

Decreasing water levels in the Rio Grande further concentrate the salt in the soil with little rain to leach it away. Even if there was more rain, the local soil — fine soil deposited by the river and clay-heavy agricultural soil — isn’t very permeable, so it’s hard for water to get in to leach salt out.

Irrigating with salty water, which is the only water available, creates a self-perpetuating problem, Niu said.

“The rainfall is so little, so water is constantly evaporating. If you are irrigating a pecan orchard or a field of cotton, the salinity gets worse with more irrigation, because there’s no pure water,” she said. “Then water will evaporate. As soon as the water is lost in the atmosphere, you have no control. But the salt stays there forever.”

Every crop has a threshold for the amount of salt it can handle before the quality and yield suffers; cotton is somewhat tolerant to salinity, while pecans are not. Too much salt can burn crops’ leaves and roots, reduce their ability to take up water and nutrients and stunt plants.

“So, we have to manage it, because we don’t have any other type of water available in the region,” she said. “Anything that is going to save water and grow plants, I would be willing to try.”

Solutions and other problems

Finding solutions to the salinity and water issues starts with knowing the extent of the problem. Enciso uses sensors to understand fluctuations in groundwater and soil moisture, while Ganjegunte identifies salt hotspots in agricultural fields, making field-scale salinity maps for producers and district-level salinity maps for policymakers.

“We need to see where the problem is and rectify it,” Ganjegunte said. “We are trying to develop solutions to make life sustainable, to ensure the long-term viability of irrigated agriculture.”

Some solutions to remove the salt include growing salt-absorbing crops like barley and sorghum. When the plants are harvested, less salt remains in the soil. Also, producers can try to leach the salts out of the soil by deep tilling and applying water-soluble forms of calcium. And, with some creative design, Niu said producers can also lop off the saltiest part of the soil.

“They build a ridge and a furrow. When you irrigate the field before seeds are sown, the water is evaporated to the air gradually, and the salt follows the movement to the top of the ridge,” she said. “So, the salt accumulates on the edge of the ridge, and producers just lop off that ridge, removing the top, and then they sow the seeds. This way, the new soil layer is not so saline.”

Salinity depends on the volume of water, so using low-water irrigation methods like drip irrigation adds less salt to the soil and makes less preexisting salt become soluble. Also, desalination of agricultural water may be an option someday, he said, but it isn’t affordable yet.

Diversifying to deal with the salt

Other solutions address the crops being grown in the salty soil. Some crops can be made hardier, such as with the salt-tolerant pecan rootstocks that Niu has worked on.

An Asian woman wearing a blue shirt lifts up a white board into which plants are planted, revealing exposed roots in a hydroponic system

“You cannot find a cultivar that is good on everything, but how about we find something that is salt tolerant?” she said. “Then we can always do grafting — you know, find a good rootstock and graft on something that has the quality of the nuts or high yield.”

There’s also the possibility of changing or adding crops, she said. She gave the example of indoor hydroponic farming of leafy greens. Hydroponics requires greenhouses but not soil, so it sidesteps the soil salinity issue while using a fraction of the water.

Growing less-common crops such as pomegranates and quinoa is also an option. These crops are salt tolerant enough to handle the region’s soil.

“Quinoa is a salt-tolerant, short-duration and low-water intensive crop. It can produce revenues at the same level as pecans,” Ganjegunte said. “It can give serious competition to the existing cash crops.”

Still, no one solution to the salt and water problems will be enough, Enciso said.

“This is a complex area where simplistic approaches and solutions don’t work,” he said. “We have to carefully study each situation.”

Keeping agriculture along the Rio Grande resilient will take a little bit of a lot of solutions, Niu said.

“I think diversifying is good. The traditional crops such as pecans and cotton can stay, but we probably need to add more crops,” she said. “Diversification is needed to keep the vitality. This way producers keep busy and keep the flow of cash coming in.”

The future for producers

That flow of money to producers is important. Growing new crops like pomegranates requires new machinery, skills and distribution chains, while the market for bioenergy crops fluctuates with the price of crude oil. Changing crops and methods involves a lot of risk.

“Producers’ livelihoods depend on agriculture,” Ganjegunte said. “They have invested so much on equipment and labor force, and they’re used to growing crops in certain ways. They have bank payments to make. If they make a mistake, if they don’t irrigate at crucial stages, it can reduce the yield and the money they get.”

As new crops and methods come into the picture, Enciso said it is vital to support producers.

“They are smart; they figure things out fast. I think we need to have a good support system for them. And we need to continue supporting our research and extension network for producers so this region continues to be successful.”

Enciso, Niu and Ganjegunte all said the process must include demonstrations.

“Most of my research is in the producers’ fields,” Ganjegunte said. “Some are eager to embrace new technologies. They are using sensors, and they download the data and send it to me. I think the best thing is to demonstrate it there, and then others will start adapting.”

Demonstrating the variety of solutions — from hydroponics to pomegranates to drip irrigation — will also help attract the next generation of producers, Niu said.

“A new way of growing things will be challenging to start, so we need a training of the workforce,” she said.

With droughts, salinity and population all increasing along the Rio Grande, change to agriculture is inevitable, Enciso said. The goal is “to be sustainable socially, economically and environmentally.”

“Everything changes. That’s why we have different crops, and we have to look for new opportunities. We have to think long term, because sometimes we want fast results, and sometimes things don’t work like that, ” he said. “We never stop learning, because the situation changes all the time.”

The original article written by Chantal Cough-Schulze appeared in the Spring 2021 txH2O magazine, a project of the Texas Water Resources Institute.