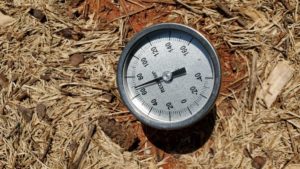 Most management guides for cotton discuss the initiation of planting in terms of calendar dates, soil temperatures and 3 to 5-day forecasts. Recommended soil temps center on 65 degrees Fahrenheit at a depth of 3 to 4 inches mid-morning, while occasionally, old literature might indicate 60 F.

The former number is conservative, meaning that at 65 and higher temperatures, cotton emergence is usually good. At 60 F, germination and emergence are more tentative and risky, especially in an era of small seeded varieties.

Reference to temps at lower soil depths — as opposed to those taken in the typical seeding zone or even to 2 inches — are recommended because there is less daily fluctuation. If favorable soil temperatures are sustained well below the surface, conditions are likely favorable for cotton.

In other words, surface temps can be a little misleading because of the rapid variations in air temp, while temperatures at 3 and 4 inches usually track on a tighter range. Air temperature is not as important as soil temperature, and though there is clearly some correlation between them, soil temps trend toward conditions over a several-day period.

Soil temps often provide a moderating effect and allow cotton to endure the quick blip of a single cold night or maybe two. Temperature readings at mid-morning are suggested to avoid the highs of mid-day and lows of early morning or late night.

What about cool spells and chilling injury? Forecasts which include lows dipping below 50 F make me nervous. That temperature is considered a threshold for chilling injury on germinating seed and emerging seedlings. Again, soil temperature is more critical than air temperature, and while nightly or early morning lows may be reached for only a few minutes, soil temps may remain in an acceptable range.

Because of this, we probably don’t encounter much chilling injury, especially if we abide by the 65 F soil temp at 4 inches, favorable forecast guidance.

I confess I’ve seen little chilling injury in my career, but I acknowledge that most of my seasons have been spent in the Coastal Plain. Yes, I’ve watched cotton emerge in the beautiful red soils of the Tennessee Valley … which tend to warm readily due to color. I think I recall seeing a young stand and snow one time around Town Creek, and the cotton lived!

The most pronounced chilling injury I’ve ever observed occurred maybe a half dozen years ago. And it was surprising. The region had enjoyed okay conditions for planting during the last week or so of April, so most growers had commenced. For the first weekend in May (around the fifth), a cold front was forecast with predicted rain and temperatures around 50 F or slightly below.

Most thought we were plenty warm in terms of soil temperature. I certainly did. Fields planted in the couple of days just before that event were significantly affected. The cotton just didn’t grow well. Marginal temperature with cold rain clearly injured the crop and reduced yield potential.

Dr. Steve Brown is an Alabama Cooperative Extension specialist. He may be reached at Steve Brown.