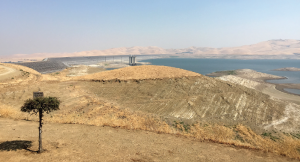 The State Water Project and the Bureau of Reclamation, which operates the Central Valley Project, have both announced reductions in water deliveries for the 2021 season south of the Sacramento-San Joaquin River Delta. They base their allocations on current reservoir storage, precipitation and the amount of moisture in snowpack in the Sierra Nevada.

The California Department of Water Resources, which operates the State Water Project, has reduced its initial allocation to 5% from the 10% announced in December 2020.

Initial allocations are based on conservative assumptions regarding hydrology and factors such as reservoir storage, according to a news release. Allocations are reviewed monthly and may change based on snowpack and runoff information. They are typically finalized by May.

The­­ 5 ­­% allocation amounts to 210,266 acre-feet of water, distributed among the 29 long-term SWP contractors who serve more than 27 million Californians and 750,000 acres of farmland.

The State Water Resources Control Board also mailed early warning notices to about 40,000 water right holders urging them to plan for potential shortages by reducing water use and adopting practical conservation measures.

Due to worsening hydrologic conditions, the bureau also updated its to the initial 2021 CVP water supply allocation.

Agricultural water service contractors’ south-of-Delta allocation of 5% of their contract supply will not be available for delivery until further notice, according to a bureau news release.

As the water year progresses, changes in hydrology and opportunities to deliver additional water will influence future allocation decisions. Water supply updates will be posted at https://www.usbr.gov/mp/cvp-water/index.html.

Northern California has about 51% of average precipitation for this time of year; statewide average snowpack levels are at 63% of average, according to bureau figures. Ongoing dry conditions will require the coordination of federal, state and local agencies.