The annual outstanding agriculturalist awards recognize individuals for contributions to various areas of agriculture. This year’s recipients are Dan B. Smith for Agricultural Production, Sam Middleton for Agribusiness and Mike Simpson for Public Service. 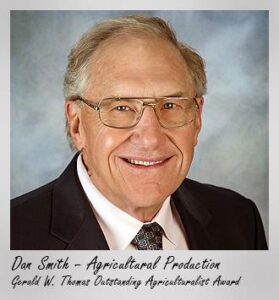 Smith received his bachelor’s degree in agriculture economics (1976) from Texas Tech. A fourth-generation farmer, he produces cotton, corn, grain sorghum and wheat in Floyd, Hale and Briscoe counties in Texas.

The Lockney, Texas, native has served as Mayor of the City of Lockney, Board of Trustees of Lockney ISD, president of Floyd County Farm Bureau, Floyd County Appraisal District. He is currently president of the Lockney Economic Development Corporation. Smith served on the board of directors for Texas Farm Bureau (2012-2018). While serving with Texas Farm Bureau, he made frequent trips to Austin, Washington, D.C., and throughout the United States promoting and advocating for Texas and U.S. agriculture.

Smith served on the study and research committees in the development of the John Deere CS690 Cotton Stripper-Baler, in addition to serving on the Northern High Plains Boll Weevil Steering Committee. 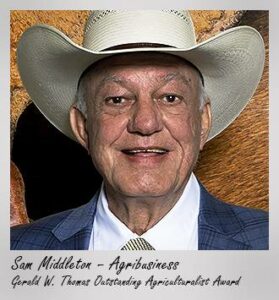 He is owner and qualifying broker of Charles S. Middleton & Son, a farm and ranch real estate and appraisal company established by his grandfather in 1920. Middleton holds real estate broker’s licenses in five states, including Texas, New Mexico, Oklahoma, Colorado and Kansas, and is active in ranch sales throughout those states.

He is a member of the Texas and Southwestern Cattle Raisers Association, New Mexico Cattle Grower’s Association, and the American Society of Farm Managers and Rural Appraisers. He served as past president of the National Ranching Heritage Association and worked on the organization’s endowment board.

Middleton has been involved in the sale of some of the largest, most historic ranches in the Southwestern United States, including the 136,000-acre Frying Pan Ranch, 71,000-acre Canadian River Ranch and the 130,000-acre Matador Ranch. He also handled numerous sales for Anne Marion, owner of the 6666 Ranches. He is a past director of the National Windmill Museum and currently serves on the Texas Tech Equestrian Center Advisory Board. 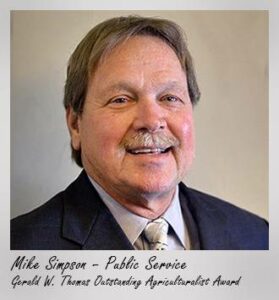 He received his bachelor’s degree in animal science (1975) from Texas Tech. The Floydada, Texas, native was employed by Elanco Animal Health for more than four decades where he held positions in sales, marketing and strategic account management.

When he retired, Simpson was beef business manager for U.S. feed yard corporate accounts. He is certified in training courses that address leadership, communication  and strategic account management.

Simpson is past chairman of the Texas Cattle Feeders Allied Industry Committee, and currently has a consulting business that focuses on facilitating workshops on leadership and communication. He was honored as a CASNR Distinguished Alumnus (2015) and was inducted into CASNR’s Department of Animal and Food Sciences Hall of Fame for Distinguished Service (2018).