2014 Consultant of the Year: Stan Winslow 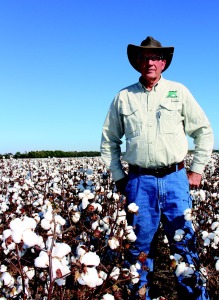 What motivates a person to pursue a career as a cotton consultant? No matter how that question is posed, you might receive numerous answers. But, one familiar theme rings true for those who have chosen this career – commitment. A consultant is the farmer’s partner year-round and treats his customers’ acreage as if it were his own. Just call him the farmer’s version of the family doctor who is available 24 hours a day, seven days a week.

For that reason, it is not surprising that so many people in northeast North Carolina and southeast Virginia reacted positively to the announcement that Stan Winslow of Belvidere, N.C., was named the 2014 Cotton Consultant of the Year.

For more than three decades, Stan has devoted himself to agriculture in this region. When he received his undergraduate degree from North Carolina State University in 1978, he began a long journey toward his ultimate goal.

At every stop along the way, Stan has built a reputation based on trust, hard work and excellent recommendations to farmers. After receiving his bachelor’s degree, he spent 13 years as an Extension agent and then made the transition to becoming a consultant in 1991.

In 1998, Stan started Tidewater Agronomics, Inc., and has grown his business into a thriving consulting and contract research company with 15 full-time employees.

“All I can say about this award is that it is a team effort,” he says. “Everybody contributes, and I am just honored to be included in such a wonderful group of past winners.”

Like many previous winners of this award, Winslow is quick to give others credit for whatever success he has enjoyed throughout such a long career.

“I have to give my wife Lou Ann and the good Lord all the credit,” he says. “I know that I couldn’t have done any of this by myself.”

Obviously, it’s a labor of love that motivates Stan, his family and staff as they help local farmers make the best possible decisions on cotton, wheat, soybeans, corn, potatoes and other crops.

His farmer-customers are unanimous in their praise for his expertise and the manner in which he conducts business with them every day.

Producer Walter Cartwright of Hertford, N.C., has worked with Winslow for 20 years and says he trusts him “99.9 percent of the time” on crop recommendations.

“He is very committed to his farmers,” he says. “He treats my cotton like it’s his, and he doesn’t miss a thing. He’s also a fine Christian man who con- ducts himself with integrity.”

When a consultant receives that kind of praise from a long-time customer, nothing else needs to be said. It’s an example of farmers appreciating the hard work of their consultant.

Stan Winslow is quick to credit his family and staff for the success of Tidewater Agronomics, Inc. Because the company has both consulting and research services, a farmer receives additional data and information during the crop year.

“We have a dedicated staff,” says Stan. “As our business has grown, we’ve expanded our services and increased the number of employees. It’s a win-win situation for our customers.”