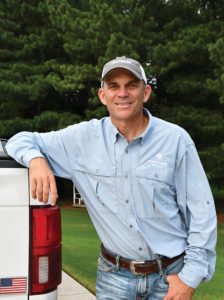 This season has been a challenge for getting anything planted in the Mid-South. I’ve been in the field for almost 30 years, and I’ve never seen a planting season this delayed. It seemed like we caught a rain every five to seven days since the 2018 harvest all the way up to planting.

Plant bugs can be a problem early during pin-head square, but the major challenge is in post-bloom cotton when both adult and immature populations begin to build. The plant bug that poses the biggest threat in the Mid-South is the tarnished plant bug. Of course, we still have the other species, which include fleahoppers and clouded plant bugs.

Plant bugs are insects with piercing mouthparts that can damage all fruiting structures, including squares, flowers and bolls. Damaged fruit in cotton leads to square shedding or damaged bolls that either leads to yield loss or quality issues. You must watch your thresholds during flowering or post-bloom cotton, which is typically three tarnished plant bugs per 5-row feet. Sampling varies by plant stage where pre-bloom cotton is sampled with sweep nets or square retention counts while drop cloths are still used later in the season for post-bloom cotton. Many consultants make quick assessments of white blooms for dirty bloom counts.

I suspect plant bug populations will be higher this year due to later planting and the increase in corn acres across the Mid-South. Many Transform WG insecticide applications will begin during early flowering cotton once threshold levels are reached at the rate of 1.5-2 ounces per acre followed by a sequential application 10-14 days later when needed for heavy infestations. I’ve also heard many consultants say they like the residual component of Transform, especially when dealing with plant bug adults and immatures.

The Isoclast active ingredient has minimal impact on beneficials and doesn’t flare spider mites. It’s also the only insecticide in the Group 4C class and moves in the leaf with translaminar (local systemic) activity. This means it can protect both sides of the leaf, providing residual control of plant bugs through contact and ingestion. Most consultants apply Transform after cotton begins to bloom and either tankmixed or rotated with other chemistries with different modes of action. Remember, it’s a standalone insecticide in its own class of chemistry, which makes Transform a great rotational partner for integrated pest management.

Anytime we can add a different class of chemistry to the consultant’s program that doesn’t flare the wrong bugs, growers are ahead. I know it’s been extremely tough this year, but GOOD LUCK for the balance of the growing season.