My first work in pest management in cotton, other than the farm I was raised on in Cameron County, was with the USDA at Brownsville, helping to read results from insecticide trials. All that occurred in the early to mid-60s and then again in the early 70s following a stint in the U.S. Air Force. After graduating from Texas A&M, I was hired by the Texas Agricultural Extension Service to work in West Texas, helping to conduct the IPM program in cotton. I was later transferred to the Rio Grande Valley (RGV) to do the same work as an IPM specialist in Cameron, Hidalgo and Willacy counties. I retired from Extension in early 2004 and started my consulting practice, which continues to this day.

The 2014 cotton season was the best ever for RGV farmers in terms of cotton lint yields per acre with more than 1,028 pounds. The low price of cotton in 2014 was overcome somewhat by these great yields. We also had few insect or weed concerns in 2014. Cotton rotation with grain sorghum is the general rule of crop production in the RGV most years. Wet weather, which started in late August of 2014 and just slowed down in late May of this year, severely restricted planted acres because time ran out for insured cotton on April 15. Instead of the anticipated 100,000-plus acres for 2015, growers were only able to get in slightly fewer than 60,000 acres. Grain sorghum was planted on about 450,000 acres this season, making up for most of the non-planted cotton acreage.

Weeds were and continued to be a problem even into early June due to wet fields, which would not support ground spray equipment. Aerial applications of herbicides were severely limited in cotton due to all of the grain sorghum acres planted in proximity to cotton. Our No. 1 weed issue in the RGV is false ragweed. As fields began to dry, farmers were finally able to make herbicide treatments to their cotton. Most fields’ weed control was in much better shape by early June. Reports of glyphosate-resistant pigweed were coming in by mid-May of this year. However, pigweed control still was rated to be very good overall.

Cotton has been fruiting well with most fields having blooms and small bolls. Insect and mite problems have been minimal so far with only small issues with aphids and slightly more with cotton fleahoppers. Typically, fleahoppers and aphids come onto the scene about the same time, and Transform has performed very well on both pests. If more than two sprays for aphids and fleahoppers are required, we will look for an alternative to keep from using the same product too frequently. Plant bugs, labeled Verde bugs, may yet be of concern principally in the coastal counties but have only appeared in slim numbers in fields at the time of this writing.

Given the good to almost excessive moisture in our cotton crop this year, it looks like we could have another excellent production season. Cotton square set was exceeding 95 percent in most fields by early June. If we can hold even 50 percent of the fruit on the plants that is there now through boll opening, Rio Grande Valley farmers should see a good yield again in 2015. 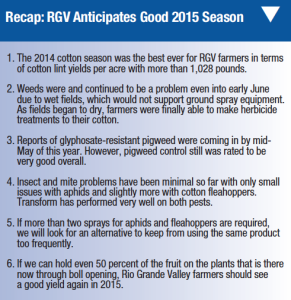