If you ever worried about the next generation of cotton industry leaders, you can relax. Maybe that’s an overly confident remark to make in 2015. However, based on what I recently observed at a media panel discussion with members of the new Emerging Leaders Class program, the future has never looked better. 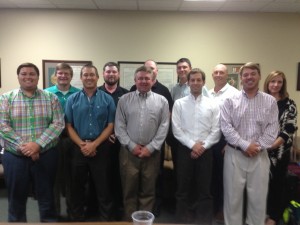 This program, now in its third year, is supported by a grant to The Cotton Foundation from Monsanto. The National Cotton Council (NCC) conducts the program’s activities, and the goal is to provide participants a better understanding of how the NCC carries out its mission. Members of this class will participate in three sessions during the next year.

The first session involved media training in Memphis and a trip to Monsanto’s corporate headquarters in St. Louis. The second session will consist of a trip to the NCC’s Annual Meeting in February where class members will observe how the organization develops policy. The third session will involve a trip to Washington where the focus will be on policy implementation and international market development.

After spending an afternoon with these 12 young people, I am convinced that the U.S. cotton industry has cultivated some outstanding leaders. And why would I feel that way? Maybe it’s because the industry’s younger generation is more savvy and committed to cotton than we ever imagined. Maybe it has something to do with what they learned from their parents who also were a part of the industry. Whatever the reason might be, this younger crowd appears to have all of the attributes needed to help cotton solve its problems and recapture market demand.

Naturally, it made me feel pretty old as I chatted with class members whose parents I had interviewed 20 or 30 years ago. But that’s the beauty of the cotton industry. It is one big family that stretches from the Carolinas to California, and usually you can find a connection to a familiar face no matter where you travel.

I have participated on this media panel for three years, and it’s always encouraging when I see young people trying to improve their skills in dealing with the media. Let’s face it. There is a world of difference when an ag media representative interacts with farmers as opposed to someone from the New York Times or Washington Post conducting the interviews. I don’t have anything against those prestigious East Coast newspapers, but, frankly, it’s difficult to communicate ag’s message to mainstream media outlets. Either they don’t understand agriculture or something gets lost in the translation.

I also was impressed at how well versed these young class participants were on various topics. They obviously had done their homework on issues such as water, commodity price reporting, Farm Bills, weed resistance, global markets, and the list goes on and on.

It was also nice to hear questions from the class on topics such as “off-the-record” comments and knowing how to develop mutual trust with the media. This kind of dialogue is important if any young cotton industry leader hopes to gain an understanding of how to tell his (or her) story to reporters representing radio, television, newspapers or magazines.

The media panel, which also consisted of Forrest Laws of Farm Press and John Winfield of the Mississippi AgriNews Network, conducted mock interviews with each class member and purposely tried to ask tough questions. Not surprisingly, each class member had done his homework and was ready to deal with what we asked.

As I said before, we often wonder who will be the leaders of the U.S. cotton industry as we see more of our older leaders retire. After observing the intellect and enthusiasm of members of the Emerging Leaders Class for the last three years, I feel good about what lies ahead. I am willing to predict that somebody in this 2015 class will someday become chairman or president of a major industry organization.

How’s that for having confidence in the younger generation? Check with me in about 10 to 15 years to see if my prediction was accurate.