What was the threat to dicamba?

■ After the U.S. Court of Appeals for the Ninth Circuit vacated the 2018 registration of Xtendimax, FeXapan and Engenia dicamba herbicides under the Federal Insecticide, Fungicide and Rodenticide Act in June, the NCC immediately sent a letter to Environmental Protection Agency Administrator Andrew Wheeler.

The correspondence noted that most of the 2020 U.S. cotton acres had been planted to varieties that were tolerant to over-the-top applications of these herbicides, which are a critical component in weed resistance management. The letter stated that the U.S. cotton industry would support an appeal of the court’s decision, if such an appeal were to be filed. The more urgent request, though, was asking EPA to allow the use of existing dicamba stocks, which it did in its subsequent cancellation order. 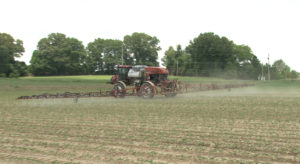 The brief explained that without access to dicamba products, cotton producers could expect up to an $800 million yield loss. This would exacerbate the already tenuous economic situation they faced from depressed market prices and increased market uncertainty, due to ongoing trade tensions and the COVID-19 pandemic.

The brief also emphasized that terminating the EPA’s existing stocks order would set a disruptive precedent with profound, long-term consequences for all farmers and ranchers for years to come.

The court quickly denied the opponents’ emergency motion to halt dicamba use. The ruling meant that cotton producers and commercial applicators could continue applying existing stocks (those in hand as of June 3) of XtendiMax, Engenia and FeXapan through July 31.

What is the status of Enlist Duo?

■ The plaintiffs who brought the dicamba lawsuit also have a pending lawsuit, filed in 2017 in the same court, against EPA’s registration of Enlist Duo, an important 2,4-D-choline and glyphosate premix herbicide.

This lawsuit, like the dicamba lawsuits, argues that Enlist Duo’s registration violates FIFRA through EPA’s use of the wrong legal standard and the Endangered Species Act by EPA’s failure to consult with wildlife services. It makes some of the same claims that these plaintiffs successfully made against dicamba’s registration and asks for the Corteva product’s registration to be vacated.

The NCC agrees and will continue to monitor this legal situation and, if necessary, engage with EPA as it did with the dicamba lawsuit to preserve this valuable plant protection product.