Rockin’ The Hills Of West Tennessee 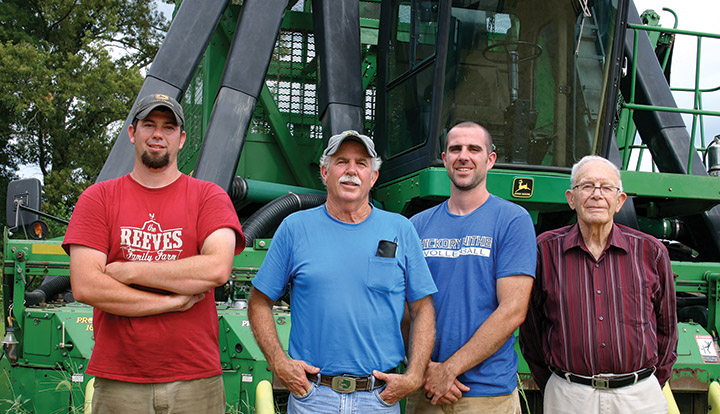 In the late 1800s, Ernest Reeves traveled from Canada and settled in Fayette County, Tennessee, where the Loosahatchie River runs through the rolling hills and bottomland of this fertile agricultural area.

When Ernest passed away in his 80s, his son, E.A. Reeves, dropped out of the 11th grade to farm the land he inherited from his father and take care of the rest of the family. E.A.’s son, William, followed in his footsteps until he was called to be a missionary in West Virginia.

Touched by divine intervention, William packed up the family, including his 13-year-old son, Billy, and headed east. Billy spent 16½ years working in the coal mines, which had a rich heritage in much of the state’s history.

Although he was making good money, Billy still dreamed of farming. At the time, he satisfied that yearning by growing soybeans, corn and hay on the side.

“Farming got in my blood because my dad farmed before we moved to West Virginia,” Billy says. “In 1994, when I was 34, we moved back to the home place in Tennessee where I started farming from scratch.

“I had no machinery and couldn’t get a loan from the Farm Service Agency because I didn’t have a history with cotton, so my neighbors stepped in and helped me get started. My first crop was 75 acres of cotton right here on the same hill where we first began. Fortunately, I made a bale and a half per acre in 1994 and sold it for about 74 cents per pound.”

Through the years, Billy continued to pick up ground, and today farms about 3,000 no-till dryland acres of cotton, corn, soybeans and Bermuda hay in partnership with his sons, Chip and Joey. 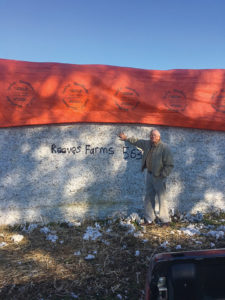 William Reeves, who represents the third generation at Reeves Family Farms, stands in front of the last module he packed in 2017 before retiring. He says he still recalls pulling cotton to Longtown Gin in Mason, Tennessee, on an old two-cylinder tractor hooked to a trailer back in the day — photo by Chip Reeves

“It was a good year,” Chip says. “We grew the best cotton we’ve ever had, but our overall yield didn’t reflect that. We had about 400 acres in the Loosahatchie River bottoms that went underwater in July when the plants were fruiting.

“Surprisingly, the cotton put on a good crop after the water receded, but we didn’t get enough heat units to finish out the bolls. This brought our overall average yield down to 930 pounds per acre on the whole crop.

“However, the hill cotton — all dryland — picked anywhere from 1,100 to 1,400 pounds per acre. It was beautiful. We also had some of the best grades we’ve ever had, including several 11s on color. And before the rain came, we had a turnout of 44% at Longtown Gin in Mason, Tennessee.

“One of the reasons we like PhytoGen is that it yields well and nine times out of 10, the quality is high. We think both yield and quality are important when choosing what varieties to plant. Every cent counts in cotton.”

Chip also credits the yield increase they have experienced to having good cotton scouts — John Hines and Hunter Sheehan — check their cotton once a week and help them make timely decisions on inputs.
“In addition to checking for weeds and insects, they keep an eye on the growth of the cotton plant and make recommendations

for applying a plant growth regulator,” he says. “They want to make sure the cotton loads up with blooms and bolls versus stalk and vegetative growth.”

The Reeveses say they had intended to plant 1,400-plus acres of cotton in 2020. But when cotton prices dropped from 72 cents in January to 52 cents at planting time and the presence of COVID-19 was changing everything, it was back to the drawing board. 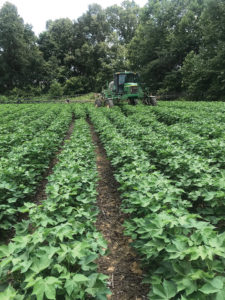 As of midseason this year, the Reeveses agree the cotton is loaded up and looking good. The inset photo shows a five-lock boll of PHY 430 W3FE — photo by Chip Reeves

“We changed our minds five or six times on the amount of cotton we were going to plant,” Billy says. “We didn’t know what to do. We finally decided to go with 600 acres and hope next year is more stable.”

When it comes to the most troublesome weed that challenges their cotton crop, Chip says pigweed is definitely the frontrunner. To keep it in check, he sprays Enlist One herbicide.

“We like Enlist because we can still get it, and it stays in the field where you put it,” he says. “As of right now, we haven’t had one off-target issue with Enlist. We’ve also tankmixed Liberty herbicide with it. This combination wipes out pigweed.”

The fifth-generation Tennessee farmer says he would describe 2020 so far as a light insect year for cotton.

“We made only one thrips application and sprayed once for plant bugs,” Chip says. “They weren’t at threshold, but we decided to clean them up anyway.

“Because our PhytoGen varieties have the WideStrike 3 technology, we don’t have to spray for bollworms. We start out $18 ahead at the beginning of the year by avoiding sprays and don’t lose money from damaged bolls.”

When asked to share what they liked best about growing cotton, the Reeves crew were all in agreement — harvest time. 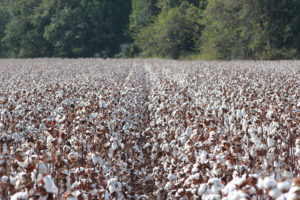 In 2019 before the rain set in at the end of the harvest season, Chip Reeves says they captured several 11s on color grade and 44% turnout at the gin — photo by Drew Harris

“The first year I grew cotton, I had an old International gas-burning two-row picker that looked like it came over on Noah’s Ark,” Billy says. “We went from that to a four-row John Deere.”

“We can get the picking done with just three people,” Billy says. “We average about 65 acres a day. One day we picked 100 acres while running at night until about 4:30 in the morning because it was breezy and didn’t dew. We can all operate the machinery, so we change up if we need to.

“We have an efficient harvest system worked out. It takes about 45 to 60 seconds to dump, and then I am back on the row. It never stops.”

The Resilience Of Cotton

Although cotton has its challenges with price and weather, it can survive the hot, dry climate of Fayette County, Tennessee, year in and year out, Billy says.

“We have also found that corn is a good rotation crop for cotton, especially when it comes to pigweed,” he says. “Pigweed doesn’t like atrazine, so we can clean it up in the corn crop.

“And the organic matter left on the ground from the corn helps retain moisture during dry times. Every acre has been no-till since 2006.”

In looking to the future, the Reeves family is optimistic about planting and nurturing their favorite crop — cotton. It’s in their blood and dear to their hearts. And maybe one day, they will turn it over to the sixth generation of Reeveses who hopefully will enjoy it as much as they do.