A Sense Of Urgency

With U.S. cotton facing ever-stronger competition from other countries’ growths and from man-made fibers, the National Cotton Council believes it is imperative that our industry increase efforts to prevent lint contamination.

What steps have been initiated?
Earlier this year, the NCC re-established its Quality Task Force to monitor ongoing quality issues and stay abreast of lint contamination incident reports. Increased complaints from textile mills are threatening U.S. cotton’s reputation. The NCC took another step when it recently amplified its existing contamination prevention policy — directing the task force to coordinate and oversee the creation and implementation of a comprehensive and effective contamination prevention program for cotton producers and gins. This effort is in collaboration with the NCC’s American Cotton Producers, the National Cotton Ginners Association (NCGA), and other producer and ginner interest organizations. 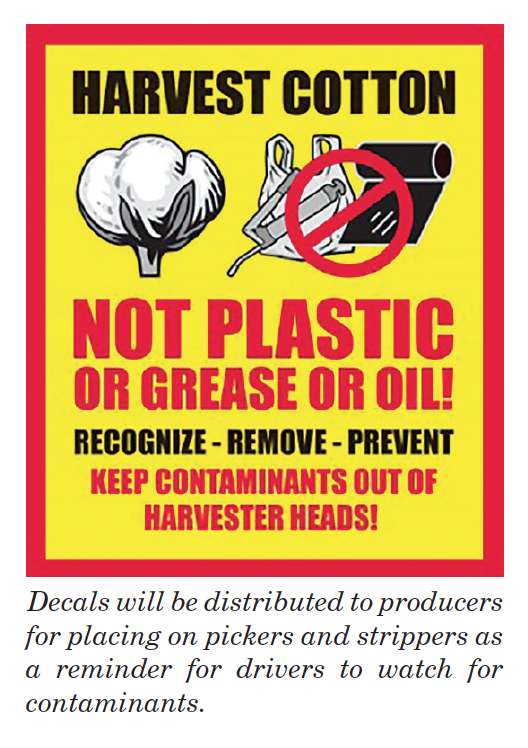 Are plastics still the major concern?
Plastics continue as the major contamination source whether from shopping bags and black plastic mulch to irrigation poly pipe and module wraps. We are urging producers to be diligent in removing from their fields all forms of plastic throughout the season and especially prior to harvest. Producers should try to eliminate other potential contaminants, such as seed coat fragments, excess bark and oil/grease.

More and more textile mills are using expensive detection equipment ­— and most of the contaminants detected at the bale opening stage can be traced back to specific production areas and even specific farms and gins. However, many contaminants go undetected. That includes stickiness. Producers are reminded to employ cultural practices for good control of aphids, whiteflies and some plant bug species as these insect pests can leave secretions on the plant’s leaves that gum up textile processing equipment.

Any specific outreach actions being taken?
The NCC is updating existing educational materials. Decals will be distributed to producers to be placed on their pickers or strippers as a reminder for drivers to look for contaminants during harvest. In addition, presentations are being made at this year’s three ginner schools where gin managers and their workers are being instructed on steps to take for preventing contamination. Among those are making sure module feeders are kept clean and bales are properly wrapped, including not over welding the plastic strapping now being used on 75 percent of U.S. bales. With round modules wrapped in plastic emerging as a significant harvest method, both producers and ginners are being asked to watch or review the NCGA-produced round module handling video. It and other contamination prevention resources are on the NCC website’s Quality Preservation page at www.cotton.org/tech/quality/index.cfm.

All industry members are encouraged to share what’s working and not working regarding contamination prevention and to relay any information about new contamination sources. They can contact their NCC member services representative or send an email to keepitclean@cotton.org.