What’s in the legislation?
Before it was signed into law in mid-June by President Obama, the Water Resources Reform and Development Act (WRRDA) was overwhelmingly approved by the House (412-4) and Senate (91-7). The WRRDA authorizes the construction of major navigation and flood risk management projects. Of additional significance to agriculture is that the new measure also contains language designed to give farmers and ranchers some relief from EPA’s Spill Prevention Control and Countermeasure (SPCC) rule on farm storage tanks of fuel and oil. 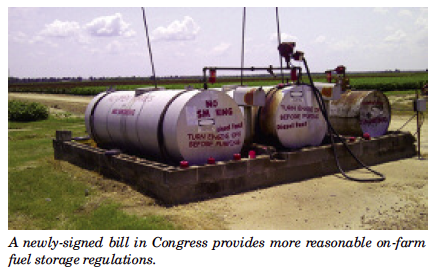 What relief had previously been sought?
Sen. James Inhofe (R-OK) and Rep. Rick Crawford (R-AR) led efforts to obtain SPCC relief. Crawford introduced the Farmers Undertake Environmental Land Stewardship (FUELS) Act. The NCC supported that legislation which would have raised the compliance threshold requirement to a more realistic and practical level and allowed self-certification rather than requiring a detailed plan by a professional engineer. Inhofe added an amendment to the WRRDA legislation to exempt all tanks of 1,000 gallons or less from the rule and to exclude from compliance with the rule all farms with an aggregate tank storage capacity of 2,500 gallons or less. Agricultural organizations, including the NCC, expressed support for these provisions.