Agriculture Secretary Tom Vilsack has announced that farmers, ranchers and landowners committed to protecting and conserving environmentally sensitive land were able to sign up for the Conservation Reserve Program (CRP) beginning June 9. The Secretary also announced that retiring farmers enrolled in CRP could receive incentives to transfer a portion of their land to beginning, disadvantaged or veteran farmers through the Transition Incentives Program (TIP).

“CRP is one of the largest voluntary conservation programs in the country,” says Vilsack. “This initiative helps farmers and ranchers lead the nation in preventing soil erosion, improving water quality and restoring wildlife habitat, all of which will make a difference for future generations.”

Vilsack continued, “The average age of farmers and ranchers in the United States is 58 years, and twice as many are 65 or older compared to those 45 or younger. The cost of buying land is one of the biggest barriers to many interested in getting started in agriculture. The Transition Incentives Program is very useful as we work to help new farmers and ranchers get started.” 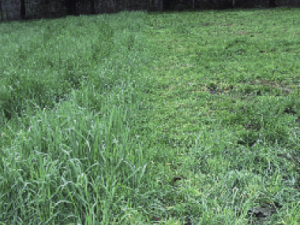 In this Arkansas field, the difference between grazed and ungrazed pasture is noticeable under an intensive grazing system. The pastures are separated by an electric fence and are on a three-week rotation.

CRP consists of a “continuous” and “general” sign-up period. Continuous sign-up for the voluntary program started June 9. Under continuous signup authority, eligible land can be enrolled in CRP at any time with contracts of up to 10 to 15 years in duration. In lieu of a general sign-up this year, USDA will allow producers with general CRP contracts expiring this September to have the option of a oneyear contract extension. USDA will also implement the 2014 Farm Bill’s requirement that producers enrolled through general sign-up for more than five years can exercise the option to opt-out of the program if certain other conditions are met. In addition, the new grassland provisions, which will allow producers to graze their enrolled land, will enable producers to do so with more flexibility.

The Transition Incentives Program provides two additional years of payments for retired farmers and ranchers who transition expiring CRP acres to socially disadvantaged, military veteran or beginning producers who return the land to sustainable grazing or crop production. Sign-up also began on June 9. TIP funding was increased by more than 30 percent in the 2014 Farm Bill, providing up to $33 million through 2018.

As part of the 2014 Farm Bill, participants meeting specific qualifications may have the opportunity to terminate their CRP contract during fiscal year 2015 if the contract has been in effect for a minimum of five years and if other conditions are also met.

The USDA Farm Service Agency (FSA), which administers CRP, will coordinate the various CRP program opportunities. For more information on CRP and other FSA programs, visit a local FSA county office or go online to www.fsa.usda.gov.

Both the CRP and TIP were reauthorized by the 2014 Farm Bill. The Farm Bill builds on historic economic gains in rural America over the past five years, while achieving meaningful reform and billions of dollars in savings for taxpayers.

USDA has contributed information for this article. For more details on CRP and TIP programs, interested parties can go to www.usda.gov/farmbill.