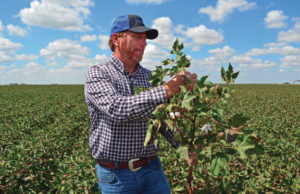 West Texas cotton farmer Alan Monroe has both dryland and irrigated fields. He says water availability is one of the main factors he considers when deciding what varieties to plant. A determinant variety is better suited for dryland whereas an indeterminant variety does better under irrigation — photo by Vicky Boyd

Alan Monroe, who farms cotton north of Plainview, Texas, never thought much about Verticillium wilt and the need for selecting varieties with tolerance to the soilborne pathogen until 2017

Last summer’s cool, wet weather later in the growing season caused Verticillium wilt to explode, producing scattered infections in nearly all of Monroe’s farms. That opened his eyes to the need for selecting varieties with strong tolerance to the fungal pathogen.

“From now on, that will be something that determines what I choose,” Monroe says. “If it’s really susceptible, I’m not going to plant it. Just because you don’t have Vert doesn’t mean you’re not going to end up with it.”

Dr. Terry Wheeler, a Texas AgriLife Research plant pathologist based in Lubbock, says she also saw a high incidence of wilt in 2018. She blames it on oscillating temperatures during mid-summer, followed by a cool-down.

“That oscillation apparently can allow wilt to develop,” she says. “It doesn’t matter what happens early. It’s what happens in the middle of July and after.”

Verticillium wilt, caused by the fungus Verticillium dahliae, has become the most economically important disease in the West Texas region, according to Texas AgriLife Extension. Because disease development is weather related, overall infections vary from year to year.

The pathogen enters plants through the root system, moving up through the vascular tissues. As the organism colonizes the xylem, it may restrict these vessels’ ability to transport water.

This not only causes telltale wilting symptoms, but it also may cause plant stunting, leaf mottling or plant defoliation. Because pathogen colonies also restrict carbohydrate flow within the xylem plant tissue, it can reduce yields as well as fiber quality.

As with other crop pests, Extension specialists recommend a multi-pronged approach to manage Verticillium wilt. Seeding rates also factor into the severity of wilt infections. Past research has found that the higher the seeding rate, the lower the wilt infection. Although the optimum rate isn’t known, experts recommend avoiding fewer than four seeds per foot.

Wheeler has conducted trials examining seeding rates relative to wilt. In fields with high inoculum levels, she found that bumping up seeding rates may actually pay with improved yields and fiber quality. 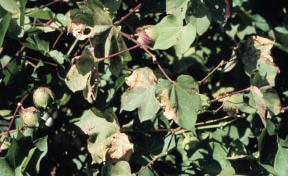 Unlike some other disease traits governed by a single gene, wilt tolerance likely involves multiple genes. This complicates development of varieties with true resistance, Legé says.

The difference between tolerance and resistance is the pest can still reproduce in the presence of a tolerant variety, but crop performance typically is only minimally affected.

With resistance, the pest cannot reproduce, the crop is unaffected and pest populations decrease over time.

Putting Tolerance To The Test

Many cotton companies, including PhytoGen, also conduct their own field trials, looking at several trait and quality factors, including Verticillium wilt tolerance.

When deciding what varieties to plant, Monroe says he first looks at water availability. Some of his fields are dryland, whereas others are irrigated using mostly center pivots and to a lesser extent, subsurface drip irrigation.

That will determine whether he chooses a determinant variety, better suited for dryland, or an indeterminant, which does better under irrigation.

Monroe then looks for varieties with high yields and fiber quality, followed by their Verticillium wilt rating.

Not The ‘Silver Bullet’

Even with a variety rated as having excellent wilt tolerance, Legé says growers may see symptoms begin to appear late in the season during high-pressure years. But by then, the crop should have been set so growers shouldn’t be overly concerned.

“Typically, you see Vert on more productive fields,” he says. “You almost never see yield-limiting Vert levels on sorry fields. Usually the lighter soil types southwest of Lubbock see some levels of Vert but not as great. On the Pullman clay loams out here (near Plainview), you’re going to find your extremely yield-limiting and mic-limiting effects.”

“Some of the worst Vert in Oklahoma cotton is on fields that were in pasture or wheat for 20 years,” he says. 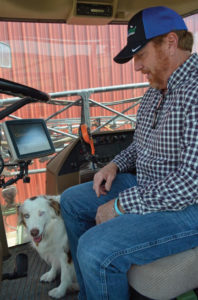 Alan Monroe installed a Mobile
Weather unit in his sprayer that
allows him to see weather alerts
and view real-time weather
conditions. His sidekick, Finnegan,
often likes to go along for the ride —
photo by Vicky Boyd

Alan Monroe has good neighbors surrounding his Plainview, Texas-area cotton fields, and he wants to keep them that way.

“Nobody wants to get anything on your neighbors,” he says. “Your neighbors understand that and you work together. We just don’t want that to happen.”

For the past two seasons, Monroe had planted varieties resistant to dicamba. But in 2018, he switched to PhytoGen cotton varieties with the Enlist trait. Monroe says he prefers to stick with a single herbicide trait package to reduce the potential for spray tank contamination.

He also chose the Enlist technology to help manage volunteers from the previous year’s crop, which couldn’t be controlled with other technologies.

Monroe wanted to do all he could to minimize the potential for herbicide drift and volatility. So he purchased a John Deere in-cab Mobile Weather system, which he set up to alert him of wind and temperature changes while he’s spraying.

“It just put my mind at peace,” Monroe says.

As an added measure, he planted a tomato, which is sensitive to 2,4-D, on the downwind corner of one of his cotton fields to act as a “canary in the coal mine.”

The tomato grew the entire summer with nary a spot of herbicide damage, proving to Monroe that the Enlist One herbicide didn’t move if applied following label directions.

“It’s becoming more prevalent, and certainly becoming more important from a regulatory standpoint and from being able to document the weather, particularly when the spraying begins and ends,” he says.

Mobile Weather is compatible with most John Deere self-propelled sprayer models and can be installed by the local dealer. The weather station itself is mounted atop the sprayer cab and data appears on the GreenStar in-cab display. By toggling to the Mobile Weather screen, users are able to set up weather alerts and view real-time weather conditions.

Currently, Mobile Weather only records weather conditions at the beginning and end of an application. But Mishler says John Deere hopes to offer an update in spring 2019 that will add a weather layer to the application map. Users will then be able to pull up the application map, click on a geo-referenced spot and see the weather data related to that point in the field.

Before each herbicide application, Monroe logs into the West Texas MesoNet network to check the Halfway weather station roughly 10 miles west of his farm for temperature, relative humidity, wind and temperature inversions. He then checks his own wind sock in the specific field for the wind direction.

The Mobile Weather unit provides similar weather data as the MesoNet but on a much more local level. And it’s opened Monroe’s eyes.

“I think before this new technology made us more aware, we had inversions,” he says. “It happens every day and every night. We have them, you just can’t see them because there’s not any moisture in the area. You’re not looking for ground fog around here, but we have inversions at every site every day.

“It’s shifted what growers thought. With the wind speed, they would think, ‘I’ll just spray at night.’ That’s actually when the inversions are occurring. It’s been a big education and, of course, it’s ongoing. I think we all understand more about weather conditions affecting applications more than we ever wanted to.”

Twice during the 2018 season, Monroe says a weather alert went off when he was spraying. On one occasion, he had checked the wind direction before starting, making sure it was away from any sensitive crops.

Midway through the application, the wind direction shifted 180 degrees, prompting him to shut down for a few hours until it returned to its original direction.

Another time, Monroe says he was spraying in the early evening when the alert went off notifying him of an inversion forming.

He called it a night.