A Bird’s-Eye View Of Cotton 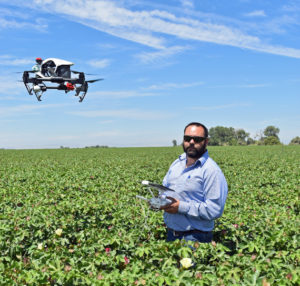 As a leader in this type of technology, Bowles Farming believes in sharing what they’ve learned with others and has hosted two UAV field days in conjunction with the University of California, Merced; California State University, Fresno; and UC Cooperative Extension.

“We try to educate as much as possible,” Metz says.

The learning goes both ways, and Bowles technology representatives meet regularly with counterparts from other operations. Because none of them is a direct competitor, the meetings lend themselves to open dialogue, Metz says.

“Those are really, really nice when we have that kind of collaboration,” he says. “What we’ve found is people are focused on different things.”

Berry growers, for example, are putting a lot of energy into mechanical harvesting to reduce reliance on labor. Bowles, on the other hand, is focused on optimizing crop inputs. 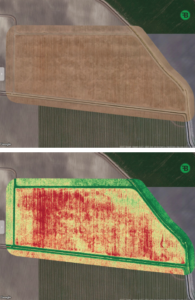 The brownish cotton field (top
is an RGB image after the initial
defoliation application. The
bottom image is the same field
but using the VARI indices
with DroneDeploy’s plant
health feature. The areas
with the darkest red have
the most plant stress and
the most defoliation. The areas
that are green have the lushest
growth and are the most
vigorous — images courtesy of
Bowles Farming

Bowles Farming comprises about 12,000 acres of diversified row and permanent crops in California’s Central Valley. Of that, between 2,500 and 3,000 acres are planted to cotton each year. About 70 percent of the farm’s acres are on subsurface drip irrigation. Soils in the region are highly diverse, and one field may have everything from clay to sand.

At the beginning of the season, the farm’s technology department will overlap layers of data from existing soil maps, satellite imagery of bare ground that shows soil variations, and data from a machine that measures soil electrical conductivity, organic matter and pH, and assign rates to the management zones.

From there, the farm’s crop advisers will review the handful of management zones, each of which shares similar soil characteristics. These variable-rate maps may be used for soil amendments, such as compost or gypsum, or for nutrients, depending on the goals.

The map is uploaded to the farm’s John Deere Operations Center account, where the applicator can access it and plug it into the variable-rate rig.

Once the crops have germinated, Metz focuses on five fields, including one each of processing tomatoes, garlic and cotton, during the season. The fields are representative, because the operation doesn’t have the resources to fly all 12,000 acres each time.

Metz flies them up to three times per week in the early growth stages and creates maps that show four different plant stress levels he shares with the farm’s pest control adviser. The PCA also reviews satellite imagery of fields for signs of stress.

“It just helps us to recognize problems early on,” says Metz, also an FAA licensed drone pilot. “They’re still doing trapping and field scouting reports, but the flights are just to make sure they’re seeing what I’m seeing from the air. We’re just making sure that something isn’t getting away from us.”

Even with the maps, the PCA still has to visit the field to ground truth the information and identify the stressor, whether it be irrigation, pest or nutrient problems. But it improves scouting efficiency and directs the PCA to the exact location in the field.

Where the drones have really earned their keep is during defoliation, Metz says.

After the first defoliant application, Metz flies every cotton field about 14 days before harvest to determine desiccation uniformity.

nlike mid-season, where plant stress is undesirable, this time of year he actually is looking for areas of the field with extreme stress. This means the defoliant knocked off the leaves and desiccated the plant. Areas of the field where the plants are still growing will need a second shot of defoliant.

Much of the variability can be attributed to the diverse soil types, Metz says. Sandy soils dry faster, so the plants defoliate sooner than areas with heavy clay that tend to hold moisture longer.

After looking at the NDVI map, the PCA once again decides how many management zones to create and will develop a variable-rate defoliation map.

By putting the defoliant only where it is needed, Bowles has been able to save up to $15 per acre on defoliation costs. The practice also has improved quality because harvesters are picking the cotton when fiber maturity is at its peak and not waiting for pockets in the field to dry down. 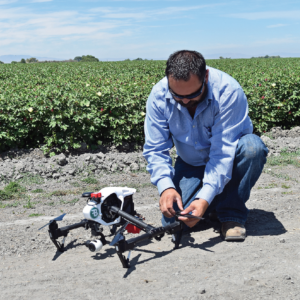 Bowles Farming flies two Inspire 1Pro drones from DJI, each equipped with four rotor propellers. These are larger than hobby or recreational drones, such as the DJI Mavic or Phantom models. The Inspire’s larger size and power allows it to carry two cameras, Metz says. The RGB camera is standard and measures red, green and blue wavelengths that the human eye also can detect. Smartphones use RGB cameras.

Bowles’ drones also are equipped with MicaSence multi-spectral cameras that capture near-infrared, red-edge and RGB images in one flight.

By running near-infrared images through a specialized program, NDVI — or normalized difference vegetative index — maps can be created to help assess crop vigor.

Much like GPS was in its infancy, growers are finding uses for drones that they may not of thought of when they originally purchased them.

“There’s a lot you can do with them,” Metz says. After heavy spring rains in 2016 damaged some over-wintering crops and prevented planting of others, he flew the fields to document the problems for crop insurance.

“It’s nice to be able to fly that as soon as possible after a rain event,” Metz says.

This season, he was called to fly a field that was being pre-irrigated before planting. Wet spots caused by damaged sub-surface irrigation tubing had started to show up on the soil surface.

Having a crew walk every row to locate the breaks would have been impractical, so Metz launched a drone and flew the field. Within a few minutes of the drone’s return, he had shared with the area foreman an aerial image showing all of the dark areas caused by leaks circled in red. The foreman was able to see the extent of the repairs needed and in turn order the appropriate amount of supplies and personnel.

Repair crews were then able to use the image to locate the exact rows in which each repair was needed.

Expect Drone Use To Soar 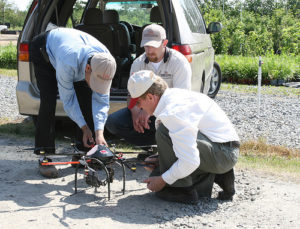 Jim Robbins, a University of Arkansas Extension ornamental horticulture specialist, is a big proponent of using drones in agriculture

“With an inexpensive camera, right out of the gate today people can do scouting and see things from a vantage point that they cannot see currently from the ground,” he says. “I try to impress to them that by picking just the low-hanging fruit with an RGB camera, they will find a return on investment.”

The RGB camera to which he referred takes photos using the same light wavelengths as the human eye sees — red, green and blue. It also is the same type of camera that comes with smartphones.

Bowles Farming Co. of Los Banos, California, has invested thousands of dollars in drones, special multispectral cameras and computer software as part of their digital imaging efforts. But Bowles technology integration specialist Justin Metz says growers can spend as little as $2,000 and perform much of the mapping and data collection he does.

The cost covers a DJI Phantom 4 drone, which comes with an RGB camera, and a year’s subscription to a mapping software service such as DroneDeploy or Pix 4.

Of those two, DroneDeploy is better suited for the beginner, he says.

“DroneDeploy takes a lot of the advanced settings out of your control,” says Metz, also an FAA licensed drone pilot. “DroneDeploy is perfect for the farmer.”

Together with an iPad or iPhone, the farmer will be ready to fly fields. Users first enter field boundaries. This can be done by flying them with a drone or importing a geo-referenced file.

Then they select the altitude, whether 200 feet or 400 feet, and the image overlap. As the drone flies, it takes several images that are eventually stitched together. The lower the altitude, the better the resolution but the more images are taken. The overlap helps the mapping software line up the images as it stitches them together to complete one large picture of the field.

Once those parameters are set, the user starts the drone and it automatically flies the field, returning when the job is done. A 160-acre field can be flown in as few as 15 minutes.

Using the Live Map function, users can view the results as a low-resolution image in real time while still in the field. No Internet is needed, either.

For higher-resolution field maps, the flight data is uploaded to DroneDeploy, which turns them around in a matter of hours.

Use Of Drones In Ag

Robbins recently completed a drone training session at the National Association of County Agricultural Agents in Chattanooga, Tennessee. He conducted a similar one at the Beltwide Cotton Conferences in San Antonio, Texas, in January.

Based on a survey of Beltwide attendees, 35 percent of respondents said they currently used a drone for work. Of those, 70 percent used a rotary platform and 30 percent used a fixed-wing. In addition, 28 percent indicated they owned a drone but hadn’t used it for work yet.

The overwhelming majority indicated they planned to use a drone for “crop monitoring.”

1. Monitoring, whether for crops or livestock.

2. Inspection of infrastructure, such as center-pivot irrigation, fencing and building roofs.

3. Plant inventory. The technology needed to count individual plants of some crops, such as cotton, hasn’t quite evolved. But DroneDeploy does offer through its app market a low-cost corn stand-count app developed by AgriSens Plant Insites. Regardless of the crop, growers can still use drones to fly fields for insurance purposes, Robbins says.

4. Applying chemicals, whether liquid or granular. “Clearly we’re not suggesting it for large-acreage row crops”, Robbins says, “but there is great interest for specialty crops with smaller production blocks.”

5. Sales and marketing. More and more producers are posting videos of their operation, including drone footage, on their websites or social media to promote their operations. “I’ve found lots of wonderful ag videos that are out there where people are flying over their farms,” he says.

For more information about drones, download the University of Arkansas Extension publication, “Features to Consider When Purchasing a Small Unmanned Aircraft System,” at https://www.uaex.edu/publications/pdf/FSA-6151.pdf. It is written by Robbins and Joe Mari Maja, research sensor engineer at Clemson University.