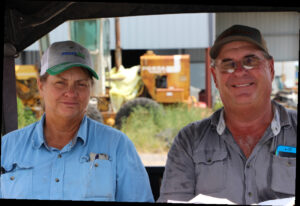 When two like-minded people get together, the synergy of their efforts can be a recipe for success. Alan and Lisa Stasney, who farm cotton, milo, corn and rice in the Texas Coastal Bend, are a shining example of how this works. They both grew up on farms but didn’t meet until the late 1980s.

Alan’s grandfather, Edward Stasney, moved to the Coastal Bend around 1938. Edward’s son, George, farmed with him until the 1960s when they parted. At that time, George and his wife, Anastazie, built Alan’s Restaurant in East Bernard, Texas. Anastazie ran the establishment, while George operated Stasney’s Texaco gas station there.

“They did this for a good while, and then Interstate 10 came through and took away a lot of the business,” Alan says. “My parents decided to make a change when they had the opportunity to come back to farm the same land that Dad farmed with his dad. During the summertime, I drove a tractor for my uncle, got the farming bug and farmed with my dad until 1980 when I bought him out.”

In Waller County, Lisa was farming with her parents, Neal and Lou Wawarofsky. They had quit raising cotton years ago because of the boll weevil and started producing peanuts to provide peanut oil for the military during World War II. Peanuts in rotation with corn eventually became a mainstay in the area. Lisa and Alan met in 1987. After they married in 1988, the couple started growing their own operation.

“We always tried to farm a lot of cotton,” Alan says. “When you’re starting with a finite number of acres, you need to be able to pay back at the bank, and grain wasn’t going to do it. We farmed cotton heavy until we were able to get more acres and put in a rotation. Today, we grow 4,000 acres of cotton, milo, corn and rice and are part owners of Tavener Gin & Grain in Fort Bend County.

“I also hired a consultant — Greg Visoski — early in my career, and it has paid off. When it rains, you can always see his footprints out in the field. He’s a real go-getter.”

Although Alan and Lisa are equal partners in the business, he is quick to give her most of the credit for their success. She does all the bookwork and can drive anything on the farm. She plants, sprays, plows and harvests the crop.

Lisa has also been instrumental in incorporating precision technology into the operation. If a spray monitor or GPS needs to be installed in the tractor, Lisa does it. She designed and built the spray trailers they pull behind the trucks and even rewired a refurbished picker they bought.

“People often say, ‘Behind a successful man is a woman,’” Alan says. “It’s just the opposite with us. I am the man behind the successful woman. Lisa is both talented and modest.” 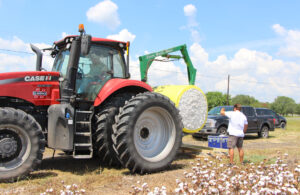 Lowell Bacak, the Stasneys’ right-hand man, drives the tractor while PhytoGen Territory Manager Will Elkins mans the weigh scale. During harvest, they weigh the Phytogen strip-plot bales grown on the Stasneys’ farm.

The Stasneys also have good landlords and a solid workforce that includes their 25-year-old son, Aaron, and three other full-time employees.

“Our son, Aaron, gets everything lined up and going in the right direction each morning,” Lisa says. “Fernando Aguilar is our tractor driver and welder who fixes everything that everybody else breaks. Lowell Bacak is our right-hand man, and Luis Belman Ladinos is really good at handling the rice.”

“We saw PHY 400 W3FE in the 2019 test plots and liked the way it looked and yielded,” Alan says. “The grades were good, too. When we see something we like, we jump on it pretty heavily, which is what we did with 400.

“During the growing season, we applied a plant growth regulator — which in hindsight, we don’t think we needed — and then the rains didn’t come like we would have wanted them to. We couldn’t water everything, but we watered what we could and then got an unexpected 20-inch rain.

“The cotton didn’t like that too much, but when all was said and done, we were really happy with the yield and the grades.

PHY 400 held its own under the growing conditions. It didn’t high mic, staple length was good, and we received a premium on a lot of it. We’re also planting it this year along with PHY 390 W3FE and PHY 340 W3FE.”

The Stasneys say the PhytoGen varieties are a nice fit in their operation because they like to spray Enlist herbicide to control waterhemp.

“Waterhemp is everywhere,” Alan says. “We’ve had good luck with Enlist on this weed.”

Aaron Stasney puts in his share of hours on the picker during the 2020 harvest.

They also have to contend with Texas panicum — a troublesome grass — and say water-robbing false ragweed is coming on strong now, too.

“False ragweed is tough to kill and very invasive,” Alan says. “Once it gets established, it won’t let anything else grow next to it. If you catch false ragweed while it’s small, Enlist works. If this weed gets any size on it, we switch over to Liberty herbicide. We like to keep our weed control program simple and not mix technologies. For example, in the test plots where there are other varieties besides PhytoGen, we use Roundup and Liberty herbicides on them.”

As far as cotton insect pests, the Stasneys say they experienced light worm pressure over the past two years.

“We still scout for worms, but WideStrike 3 really did some good when it came out,” Alan says. “However, the bollworm moth is always trying to adapt to the technology. One thing we have noticed is that the moths are beginning to lay eggs in the bloom instead of the terminal. Our consultant is really checking for worm eggs in the bloom tag now because it is not too far from the boll.

“We also fight thrips and fleahoppers. Because we are not spraying for boll weevil anymore, stink bugs are becoming more sinister. They seem to congregate in parts of a field, so you have to get out there and walk or you will miss them. There are different kinds of stink bugs, and each one has its own level of severity. You’ve got to know what you are looking for when you are scouting for them, too.”

In the disease arena, the Stasneys say seedling diseases, such as Ryzoctonia solani and Texas root rot, plague a portion of their fields.

“Because we farm more acres now, we can get in a decent rotation between cotton and grain, so we don’t have nematode problems,” Alan says.

At The End Of The Day

Farming has never been an occupation for the faint of heart.

“It takes a certain amount of crazy to do what we do — throw everything you have at something that at the end of the year could or could not make,” Alan says. “But farming gets in your blood and propels you along.”

Although different times of the season, such as planting and harvest, are more stressful than others, the Stasneys take it all in stride.

“We enjoy being outside and being our own bosses,” Lisa says. “We just get up in the morning, start working, make adjustments when things go wrong, and by the end of the day are satisfied to know we have accomplished something.”