A Year Of Learning 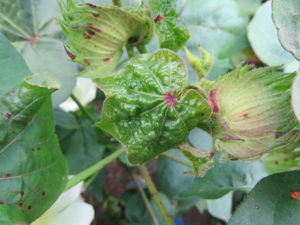 Teams of cotton researchers throughout the Cotton Belt are working diligently to learn more about the new disease that has garnered everyone’s attention. Although it was possibly in growers’ fields a year or two prior, researchers identified and confirmed cotton leaf roll dwarf virus two years ago.

Jenny Koebernick, cotton-soybean breeder, Auburn University, says, “In 2017, there were some plants down in Southern Alabama that looked suspicious, so we tested them and it came back as cotton leaf roll dwarf virus, a well-known problem in Brazil that is also called cotton blue disease.”

The virus showed up again in 2018 in Georgia, Alabama, Florida, Mississippi and South Carolina. It has since been confirmed in Tennessee and Louisiana.

“Cotton leaf roll dwarf virus is transmitted by cotton aphid, which makes it problematic,” Koebernick says. “We immediately developed a multi-disciplinary team to look into CLRDV.”

In 2019, the team from Auburn and the Alabama Cooperative Extension planted 1,000 different cotton lines both at the E.V. Smith Research Center in Shorter, Alabama, and at the Gulf Coast Research and Extension Center in Fairhope, Alabama.

“From a breeding perspective, in order to breed for something, you have to have material that’s resistant,” Koebernick explains. “I could not just grab two varieties and cross them and hope to find resistance. I have to screen and look for it.

“That’s why we have a field of 1,000 different lines replicated twice. A lot of the germplasm available has never been tested for this virus.”

Koebernick says the way it was controlled in Brazil was through the discovery of a couple of lines with resistance, but that was to the typical form of the virus.

“The typical form was found in the ’90s, but by 2006, it had mutated to the atypical form,” she says. “The form we’re finding in the states is more like a sister line to the atypical form. We are testing everything, including Brazilian lines, to see if we can find any resistance to the type we have in the United States.”

No resistance has been found among the 20 most popular cotton lines grown in the United States.

Although it will take time for cotton breeders like Koebernick to screen the germplasm for possible resistance to begin working with, researchers in other disciplines are also working on management areas related to CLRDV, including recognizing the symptomology.

Bob Kemerait, University of Georgia Extension plant pathologist, says the early season symptoms of CLRDV appear much like the “bronze wilt” from 20 years ago.

“The early symptomology includes the reddening of leaves and petioles, a drooping and wilted appearance and stunting.”

Kemerait says the affected plants can be quite obvious, especially as the season progresses. “We are now working to identify late-season symptoms as well.”

Sudeep Bag, who is also in the UGA department of plant pathology and specializes in crop virology, is part of the UGA cotton team working to learn more about the disease.

“In early 2019, the virus was found in cotton stalks and regrowth and also in weeds such as henbit and perennial peanut. These plants could potentially maintain the virus through the winter.”

Cotton stalks have also been found to serve as a host for the virus; therefore, disking or using a stalk puller may offer the best opportunities for removal.

Researchers remind growers that the tillage operation must completely kill or remove the cotton plants. Partially removing the stalk from the soil can still lead to regrowth and a potential host for the virus.

Plan to attend winter and early spring cotton meetings to find out what researchers have learned from their many approaches this season. 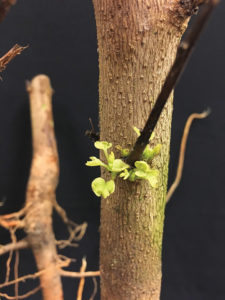 “In spring 2019, we are able to detect the virus in ratoon cotton and regrowth leaves,” says UGA’s Dr. Sudeep Bag. “These cotton stalks need to be removed from the ground/field as soon as harvest is over as a part of field sanitation” — photo by Dr. Sudeep Bag, University of Georgia

▪ Stunting, blistering or crinkling of leaves

Adding To The Confusion, CLRDV May Also Resemble: