Plan For A Timely, Efficient Harvest

Harvest is almost complete in South Texas. Gins are running full blast and modules are stacked as far as you can see, according to Dr. Josh McGinty, Extension agronomist in Corpus Christi. Grades look good and yields are all over the board, with an overall average of about 2 bales per acre.

According to Dr. Emi Kimura, Extension agronomist in Vernon, harvest has not yet started in the Rolling Plains. As of mid-September, she estimates most of the region is about 40-50 days from harvest. The irrigated crop looks good, but the dryland cotton continues to suffer from heat and moisture stress since a lot of these areas have received little to no significant rainfall since planting.

Disease and insect pressures are average. The weather forecast shows continuous hot temperatures, which should be helpful to the late-planted cotton. 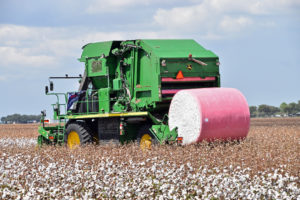 On Sept. 9, this cotton field in Matagorda County, Texas, was being harvested — photo by Vicky Boyd

By Oct. 1 when you receive this issue of Cotton Farming, it is possible that harvest has already started in West Texas. By mid-September, there were some dryland fields in and around the Lubbock area that could be prepped for harvest. Overall, the irrigated crop continues to look good despite suffering a bit from the hot, dry August and September. Most of the dryland did not fare so well.

I spent a few weeks in Brazil mid-August to early September participating in the Brazilian Cotton Congress and visiting family. The Brazilians are having a good cotton harvest with the largest producing states — Mato Grosso and Bahia — averaging 3 to 3.5 bales per acre, with some fields pushing much higher yields.

While many farmers there sold their cotton ahead of time and were able to lock in decent prices, current low prices will pose a big challenge for them as well this coming season.

We haven’t started harvesting this year’s crop in some regions, but I want everyone to start thinking about a plan for next year. Everything considered, input costs need to be watched carefully, assuming prices remain low. mmaeda@ag.tamu.edu

This year’s crop is more variable than it has been in the past few years due to irregular rainfall. As I write this in early September, we have some cotton being defoliated, especially in areas with less rainfall.

Early maturing cotton leaves us with the potential for more regrowth pressure than we have seen in the past few years. Growers need to consider using thidiazuron to help reduce regrowth. With this chemistry possibly in short supply, farmers should not defoliate too much cotton at once and get ahead of their picking capacity.

Enhanced ethephon products can reduce regrowth also, but this is mainly terminal regrowth. Basal regrowth is more of a problem. Preventing it requires a combination of thidiazuron-containing defoliants and good defoliation timing with harvest capacity. The more time that passes between defoliation and harvest, the more regrowth will occur. keith_edmisten@ncsu.edu

As I write this Sept. 9, bolls that have opened in Tennessee have not received a drop of rain. Although rain chances pick up in approximately 10 days, we should have several acres picked by then. Some farmers began defoliating their earliest planted cotton last week, and our dry weather has pushed maturity.

I’m confident we will have some outstanding cotton in the earliest planted acreage (late April-early May), but our late crop (mid-late May) is suffering in the dry heat.

If the rains in the forecast develop, we will likely see a flush of juvenile growth, which will have to be removed with another harvest-aid application. From our experience last year, it is extremely challenging to strip dense regrowth from vigorous varieties.

For best results, increase spray volume and decrease droplet size. As always, check our blog for updates at news.utcrops.com. traper@utk.edu

As I write this, the cotton crop in Missouri is variable, due to the wide variety of planting dates. But overall, it looks good with relatively high yield potential.

Ultimately, we will need a warm, dry September and October to capture this yield potential. Hopefully, this warmer-than-average dry weather will hold, and we will have a good harvest season unlike the rainy October 2018.

This crop is certainly behind with heat units being in shorter supply from June and July. Bolls open are currently at 29% for mid-September versus 2018 when 66% of bolls were rated as open by the U.S. Department of Agriculture Missouri Crop Progress and Condition report.

The five-year average is 36%, so hopefully this warm, dry weather forecasted for the next two weeks will get these bolls open and help us meet the current yield estimate of 1,239 pounds per acre.

This product also needs 24 hours to be rainfast, so keep that in mind to avoid wasting an application. I encourage using this product to help with regrowth, especially if the wet weather we have seen since last October returns. meeksc@missouri.edu

As of mid-September, warm and fairly dry conditions have helped the cotton crop mature. Even though the flowering period was timely for much of the crop across the state, boll maturity shows how far behind the crop still is.

In northwestern areas, plants that finished flowering by the end of August show relatively similar boll maturity characteristics across the bottom half of the plant.

In contrast, lower bolls have begun to crack and open across the southwest and north central regions. The dryland crop in southwestern and west central areas of Oklahoma is even further along and will likely be ready for harvest aid applications, if not harvest, by late September.

Much of the state’s cotton would benefit from this warm, dry weather stretching well into October. Conditions have not only provided an opportunity for the crop to continue fiber development but have also kept down the incidence of late-season diseases. There are little to no reports of bacterial blight or Verticillium wilt to date.

Much of our cotton will likely receive a harvest aid application the first half of October. At this point, cotton in some of the northern areas of the state is not as far along as we’d like. But it is important to remember that the products used for defoliation and boll opening perform best in sunny and warm — above 60 degrees Fahrenheit — conditions.

To properly condition the plants for an efficient harvest and avoid moisture or bark issues, adequate desiccation will be key for stripper-harvested cotton, particularly in northern Oklahoma. While a hard freeze can provide a desiccating effect to small stature plants in some parts of the Cotton Belt, a mild freeze or frost doesn’t fully desiccate the crop.

It can lead to issues for stripper harvesters, such as moisture or brittle plants. So a true desiccant application benefits the larger plants with more immature bolls and green plant material common in this region of Oklahoma. seth.byrd@okstate.edu

Cotton defoliation got into full swing during the first two weeks in September. Only about 1% of the crop has been harvested as of Sept. 12. So far, conditions have been dry, which is ideal for defoliation and getting the crop out of the field.

Harvest operations will be extended this year due to six to eight week differences in planting dates. Cotton planted in June has just now reached cutout.

About 264,000 acres of cotton were planted this year in Louisiana, which will be the most acres planted in the state since 2011. About 85% of this year’s crop is in the fair to good range with state yields expected to be around 950 pounds of lint per acre.

Too much rain early in the season, delayed planting and heavy plant bug pressure are the main culprits that have deterred lint yields this year. dfromme@agcenter.lsu.edu

Most everyone is still cautiously optimistic with regard to the crop at this time. Our early cotton looks good, and the late cotton still has the potential to be just as good with the right kind of weather.

The National Agricultural Statistics Service September Crop Production report projects Arkansas producers to harvest 1.47 million bales. Yield is expected to average 1,157 pounds per harvested acre. This would be our second highest yield on record behind the 1,177 pounds harvested in 2017 and 33 pounds above our five-year average. Producers expect to harvest 610,000 acres.

Just as a few pickers are beginning to roll, mid-September NASS projections reported crop maturity in pace with last year and condition of the crop very good with 50% of the crop rated as excellent and another 36% rated good.

There are still a great number of challenges we must be prepared to address as this crop season comes to an end. Get cover crops on your radar if they are not part of your current plan. We all look forward to seeing how this season wraps up as we make plans for 2020. brobertson@uaex.edu

Our growers planted an estimated 720,000 acres of cotton in 2019, which is the highest planted acreage since 2006. The predicted yield is 1,115 pounds per acre, slightly lower than our 2018 yield of 1,141 pounds per acre. All things considered, our producers have made another good crop in spite of the many challenges 2019 has thrown our way.

I feel it is relatively safe to say we are well into a new era with respect to cotton yield. With records dating back to 1866, only one time prior to 2012 has Mississippi averaged greater than 1,000 pounds per acre. In 2004, our growers averaged 1,024 pounds per acre.

However, since 2012 we have not averaged less than 1,000 pounds per acre. From 2012 to present, our average cotton yield has been 1,121 pounds per acre. This is a testament to improvements in all facets of cotton production made by growers, consultants and suppliers.

Given that December cotton is at 63 cents per pound as of this writing, we must continue to push yields and maximize return on investment for cotton to be profitable for our growers. dmd76@pss.msstate.edu

According to the calendar, the Alabama crop should just now be ready. But much of it has been ready…and waiting. We had many fields set to defoliate by early September. A few growers proceeded. Prolonged and extreme heat accelerated the crop to a fast finish.

Yields and gross revenue (as affected by fiber premiums and discounts) generally maximized for treatments applied at about 75% open, which was roughly four to five weeks after the first open boll. This 75% open benchmark has been repeatedly confirmed.

I usually supplement it with the sharp-knife method to check the upper bolls for maturity. In terms of quality preservation, early is usually better than later, unless you need to let the cotton brighten after a rainy period. Obviously, fiber quality declines as the crop weathers.
The initial USDA estimate for Alabama projected an average of 942 pounds per acre. Hope they are right, but that seems optimistic. Yield guesses improve as the season unfolds and cotton gets wrapped at the gin.

We have some good cotton, but much of it has been punished by drought, heat and potassium issues. My yield guess is 800 to 850 pounds per acre for a total of bout 850,000 bales.
Let’s go get ’em! cottonbrown@auburn.edu

Warm weather at planting time and throughout the year has speeded cotton maturity. Most of the Florida cotton was as much as 10 days to two weeks earlier in maturity than normal. This has led to growers having cotton and peanuts ready to harvest at the same time.

Last year’s hurricane has made growers more conscious of harvesting both crops when ready instead of waiting until peanuts are harvested to get to cotton.

Yield potential looks good in some areas and average in other areas that suffered through drought for several weeks. We hope weather will not hamper the late harvest this year. wright@ufl.edu