Home » Cover Story » Across The Belt 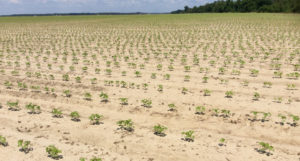 Mid-South cotton farmers experienced an overload of wet weather and flooding during the 2019 planting season. However, Mississippi crop consultant Tucker Miller says there is still reason for optimism judging by the looks of this field planted April 29 in Glendora, Mississippi.

This year’s planting season has been a mixed bag with Mother Nature taking the reins in producing unusual weather in some areas of the Cotton Belt. Other parts of the U.S. cotton-growing region were somewhat dry and waiting on a rain to get seed in the ground. The lucky areas experienced good conditions, allowing farmers to get planted on time or early. The one constant is that no year is like any other when it comes to farming cotton.

“The San Joaquin Valley has experienced a very strange year,” says University of California Extension cotton specialist Bob Hutmacher. “In general, we had unfavorable weather for planting in March. It continued raining through the spring, and then we had a hailstorm on May 20. That’s very unusual here.

“Hail damage is not super widespread, but significant acreage is affected. I don’t expect a lot of lost acres, but yield potential will be reduced. It’s probably not enough to take out the field, but I would not recommend replanting Pima after a May 20 hailstorm.”

Hutmacher says May was cool, and farmers have had about half the heat units typically available that time of year. He doesn’t expect stellar yields like the ones reported in 2018 but says they will be in the moderate to better range if it warms up.

“Another example to illustrate how weird our weather has been here is that another 2 feet of snow fell above the 8,000-foot level in the Sierras during the third week of May,” Hutmacher says. “One of the big resorts announced it would probably be open through July 4 for skiing this year.”

In Texas, Extension cotton specialist Gaylon Morgan says the Rio Grande Valley looked good the first part of May, but the Coastal Bend had to replant a substantial amount of cotton because of the wet weather. Cotton in the Upper Gulf Coast was planted but is weeks behind normal. The good news is that most regions in Texas have good soil moisture.

The Rain Set In

Planting conditions in the Mid-South were wet, wet and wetter — a weather pattern that started back in October 2018.

During the first half of May, “Very little cotton had been planted in Mississippi, and some of what has will likely have to be replanted,” according to a report from Mississippi State University Extension cotton specialist Darrin Dodds. “For those in the South Delta affected by flooding, it may be some time before any field activities begin.”

North-central Mississippi crop consultant Tucker Miller says most of his farmers got their planters back in the field May 22 for the final push after being knocked out by a round of rain.

“Most of my guys initially got started April 29,” he says. “Then we had about 7 inches of rain, so we had to spot plant some of the crop to give it a chance to make it. All of my farmers are rolling now, and with the planting power they have, they will get it done in about five days if the weather holds up.”

Other Mid-South states experienced similar conditions during the 2019 planting season — a small percentage of cotton planted in April followed by some very late May-planted cotton. 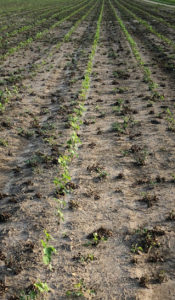 This cotton was planted in Calhoun County, Georgia, April 24. Jimmy Webb, who farms near Leary, says he didn’t have to irrigate to get this cotton up, but he did have to water some later planted cotton to help it emerge after conditions became drier.

At the end of April, Georgia had planted about 12 percent of its crop, according to the U.S. Department of Agriculture National Agricultural Statistics Service crop progress report.

University of Georgia Cooperative Extension agronomist Mark Freeman says, “This is significantly ahead of our previous five-year average of 7 percent. Although wet through most of the winter and spring, conditions in most parts of the state have become dry, and much of our planted acres tend to be on our irrigated lands.”

In mid-May, UGA Cooperative Extension agronomist Jared Whitaker conducted a survey that indicated about 50 percent of the state’s cotton had been planted. He also attributed planting progress being a little further along than normal because of good conditions in late April.

“Also, producers are trying to minimize their risk from losses that could occur at harvest by planting some cotton earlier than usual,” he says.

By the end of May, temperatures in Georgia were increasing, and the forecast indicated it would get even hotter, reaching 100 degrees Fahrenheit in some areas, according to the UGA Weather Network.

Calhoun County, Georgia, cotton farmer Jimmy Webb says he started planting April 24, and “everybody got kicked in pretty good in May.” He estimates his cotton was 80-85 percent planted May 23. “It’s dry right now and the ground is hard, so I am watering before I plant.”

All of Webb’s cotton acres are irrigated. He loves “watching the cotton grow” and shares short videos throughout the season with his Twitter followers — @Jlw1963Webb.

“I believe we are ahead of schedule this year,” Webb says. “After Georgia’s disaster last fall, I think we are shaping up to get off to a good start right now.”

In North Carolina, Extension cotton specialist Keith Edmisten says early planted cotton across the state was doing well, but cotton planted in mid-May was struggling due to lack of soil moisture.

“Conditions went from good to excellent to poor due to lack of rain,” he says.

In a planting conditions report posted online May 20, Edmisten and Extension cotton specialist Guy Collins, say, “We are now concerned about the rapidly decreasing soil moisture over most of our cotton producing areas. The forecast for Rocky Mount is for 0-20 percent chance of precipitation until it finally rises to 40 percent on May 30.”

Despite the varied weather conditions challenging farmers across the Cotton Belt this year, they are staying the course and determined to get their crop in the ground. The one constant is that no two years are alike when it comes to farming cotton.