Use Every Available Tool

It is hard to describe the behavior of the dreaded stink bug, which has wreaked havoc on cotton fields in the Southeast – and especially Georgia – for nearly two decades. The bad news is that this pest is here to stay. The good news is that farmers have tools and technology that are helping control the state’s No. 1 cotton insect pest.

In addition to new strategies, researchers now seem to understand the pest’s behavior as compared to pre-Bt cotton days before 1996. Extension entomologist Phil Roberts, based in Tifton, Ga., says it’s also easier to explain other scientific facts about this pest.

“I have had a lot of farmers ask why we can’t eradicate the stink bug – especially after we eradicated the boll weevil,” he says.

The only way you can eradicate any pest is if there is a weak link in its biology.”

For example, Roberts points out that the boll weevil reproduced on a single plant species – cotton. So, by treating every field of cotton where the weevils were detected, the pest was eliminated. Other factors obviously entered into the equation such as an effective insecticide and the use of pheromone traps. In many cases, some cultural practices were implemented to remove reproductive hosts – all because of the aforementioned weak link in the weevil’s biology.

Then along comes the stink bug. It has no such weak link in its biology, according to Roberts. It feeds on any plant that nature provides and has a wide range of hosts. So, eradication doesn’t appear to be an option.

Technology That Works Against Stink Bugs
And how does technology help in controlling stink bugs? Roberts says the Georgia Cotton Insect Advisor app (UGAcotton.com) is an effective system for determining when to make insecticide treatments for management of cotton insect pests.

The Stink Bug Decision Aid app will display the most appropriate insecticide or tankmix after the user provides information on the week of bloom, predominant stink bug species, percent of internal boll injury and other pest species present.

Does that sound complicated? It shouldn’t. Roberts says it is user-friendly and can keep the farmer one step ahead in his spraying strategy for insects.

For example, another advantage for cotton producers is learning that the presence of other pests can influence how and when to spray for stink bugs. A decision made on stink bugs could encourage or increase the risk of one of those other troublesome pests becoming an economic problem.

“When a farmer uses the app, he might notice that corn earworms also are present,” says Roberts. “He puts that information into the app and learns that he can mitigate the flaring of the corn earworm by using a tankmix of an organophosphate plus a pyrethroid. He gains control of both pests.” 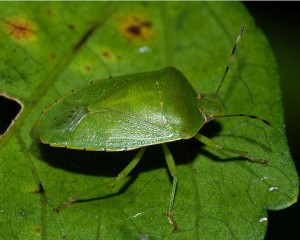 A Formidable Cotton Pest
Can the stink bug create confusion for the farmer as he tries to identify and treat for this problem? In Georgia, most producers understand the difference between the southern green stink bug, green stink bug and brown stink bug. Those are the three species that infest Georgia cotton fields and other parts of the Southeast.

Pyrethroids do well against southern green and green stink bugs but are only fair against brown stink bugs. Organophosphates provide good control of all three species. Average sprays for stink bugs are about two per acre with a range of zero to four applications per field, depending on infestations.

So, how far have Georgia cotton producers come in the battle against their No.1 insect pest? Compared to earlier days, Roberts says awareness is significantly higher. Producers are following the recommendations of Extension and doing better in scouting and using thresholds. They are also looking at the big picture in how decisions are made.

“I don’t think our producers are being complacent,” he says. “Can we minimize negative influences in the field? I think so. Sometimes we treat for the stink bug more than we should. But with better scouting, maybe we can actually eliminate one of those spray applications.”

One fact is obvious. In looking at the latest Cotton Insect Losses report from Mississippi State University entomologist Mike Williams, stink bug damage in Georgia in 2014 was significant. But the numbers also reflect progress. 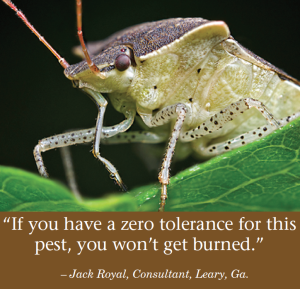 More than 1.2 million acres in Georgia were infested by stink bugs last year, resulting in a cost of $12 per acre and a loss of 48,164 bales. As entomologists and farmers learn more about the stink bug’s behavior, the better the control of this pest. For example, most significant crop loss from stink bugs occurs when boll rot is connected to the pest’s feeding. When these bugs injure a cotton boll and introduce a pathogen, they can also affect fiber development, which results in serious yield loss.

United Industry Efforts Pay Off
Whether it’s a farmer, Extension entomologist or consultant, everyone connected to Georgia cotton production knows the importance of stink bug control.

Veteran Georgia cotton consultant Jack Royal of Leary has spent more than 30 years giving advice to his producercustomers. He knows that being proactive is the only way to win the war against stink bugs. In sports terminology, it’s better to be playing offense rather than defense against this pest.

He also points to weather and host crops as being two contributing factors that affect stink bug populations. Specifically, he says it’s important to start looking at small bolls during that first week of bloom.

“We understand this pest so much better, and that is one of the reasons why Georgia farmers have had such good cotton yields in recent years,” he says. “If you have a zero tolerance for this pest, you won’t get burned.”