Burndown Mission: Maintain Coverage On Every Field – Even After Snowfall

When it comes to learning important lessons, Missouri cotton producer Steve Droke and his son Skyler are in a class by themselves. They have learned through experience what it takes to prepare for a new crop season – especially as it pertains to an effective burndown strategy before planting begins.

And why is burndown so important these days? This part of the season has become critical in the ongoing battle against weed resistance.

The Drokes, who farm 2,500 acres near Horner-sville, Mo., in the Bootheel region, can remember the message from several years ago about how resistant pigweed was affecting the Southeast. That’s when they started developing their strategy. But they didn’t have to change their philosophy too much. Steve learned from his father how to deal with weed problems. It was simply a matter of refining his approach.

This year the strategy will be put to the test as the region thaws out from an extremely harsh winter. Heavy snowfall and ice and recordbreaking low temperatures hit the region in January and February. 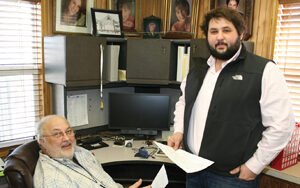 Some observers might speculate that winter weather would help kill troublesome weeds. But Steve knows better. He believes that pigweed and marestail seed can successfully survive under the ice and emerge when temperatures warm up. He has seen it happen too many times to think otherwise.

So, to put it more simply, the Drokes won’t change their burndown applications at all. They know that their regular approach is the most effective no matter how much snow and ice blanketed the area.

“We’ve been battling these careless weeds for a long time,” says Steve. “It doesn’t matter how bad the markets might get or what happens to the price of cotton and corn. You still have to start clean and stay clean on your farm. Some guys say they can’t afford to control these weeds. I say you can’t afford not to.”

As for the wintery conditions of last month, Droke says it would be unwise to think that such conditions could effectively decrease weed pressure.

“Some folks might not believe a pigweed or mares-tail seed could survive under that snow and ice,” he says. “But that is exactly what will happen. The layer of ice insulates the seed from the cold.”

Droke and his son will implement a burndown that consists of applications of 2-4D, dicamba and Valor followed by Reflex and Cotoran. After cotton is planted between late April and early May, they’ll add another application of Warrant and Roundup. Two weeks later, they’ll make a second application of Warrant. This multiple residual herbicide strategy will continue with hooded sprayers putting out Direx, more Valor and possibly Liberty. Many of these products qualify for rebates in the Roundup Ready Plus program, which helps the Drokes when they put together a budget for weed control.

This all-out assault has proven extremely effective for the Drokes as they deal with early season marestail and pigweed outbreaks after cotton emerges.

On the Drokes’ sandier soils, they will also have a wheat cover crop to help the cotton gain a stand. If the wheat didn’t survive the winter conditions, it will be replanted.

“Actually, I think it’s a good idea to go out and walk your fields after they’ve dried up from the snow,” says Steve. “When they’ve warmed up, you sometimes can see what might be coming up before you even do your burndown.”

The veteran producer also believes that it’s smart to be flexible when it comes to burndown programs. If the
snow and ice did have some kind of impact on the soil profile, it might be better to spray earlier to combat troublesome weeds.

The Drokes know the meaning of persistence. In 2013, the situation was looking bleak after a cold, rainy start to the season. By mid-July, the cotton was blooming, but then the Bootheel received 10 inches of rain, and the crop “started to go backwards.”

By Aug. 15, Steve was very pessimistic about chances for a good yield. But, then, miraculously September was a
warm month and helped finish out the crop on a high note.

“I thought I was ruined,” says Droke. “But we caught some ideal conditions and didn’t quit on the crop. It couldn’t have turned out any better.”

His cotton averaged 1,300 pounds across all fields. Another key to Droke’s success might be his willingness to plant several varieties in his cotton fields – depending on soil types.

In 2014, he’ll plant the following varieties:

Skyler, who graduated from Arkansas State University in 2013, has grown up on the farm and observed a gradual evolvement of the weed problem on the family’s farm.

He knows that it’s vital to have complete coverage on the acreage.

“I can remember one year where we missed some spots when we sprayed,” he says. “And sure enough. We saw weed escapes in those areas. That’s why we need to use these different residual combinations.”

Was the cold winter that significant in the Missouri Bootheel? Skyler says it was shocking to go out and walk on the ground in 50-degree weather, and it was still frozen.

“I just hope that I’m out there by March 15 spraying these fields,” he says. “We need for them to dry up fast.”

Contact Tommy Horton at (901) 767-4020 or via email at thorton@onegrower.com.
Don’t Be Tempted To Reduce Burndown

Even though winter conditions in the Missouri Bootheel were extremely severe in January and February, most experts agree with the Droke family about staying with a rigid herbicide application schedule.

Arkansas producer Sam Stuckey and Missouri Associate Extension Cotton Specialist Andrea Jones both say that a regular burndown program should be implemented this year – regardless of the snow and ice.

“We will start our burndown program just as we’ve done in recent years,” says Stuckey, who farms 70 miles south in Clarkedale, Ark. “We usually include a dicamba with the Roundup application.”

As planting nears, Stuckey will include a Gramoxone and Reflex application. He says this helps with a uniform coverage of fields.

Meanwhile, Jones says the burndown process “should be normal like it always is.” She says the notion that extremely cold winters can kill off resistant weeds is false.

“I’m more concerned about our sandy soils in Missouri, and the need to have that wheat cover crop in place,” she says. “Please don’t lighten up on the burndown after a hard winter. Once the heat comes back, everything will start germinating.”
Droke Farm Strategy For Burndown Program