Arkansas cotton farmer Michael Mangrum is always looking for ways to do things faster and better. 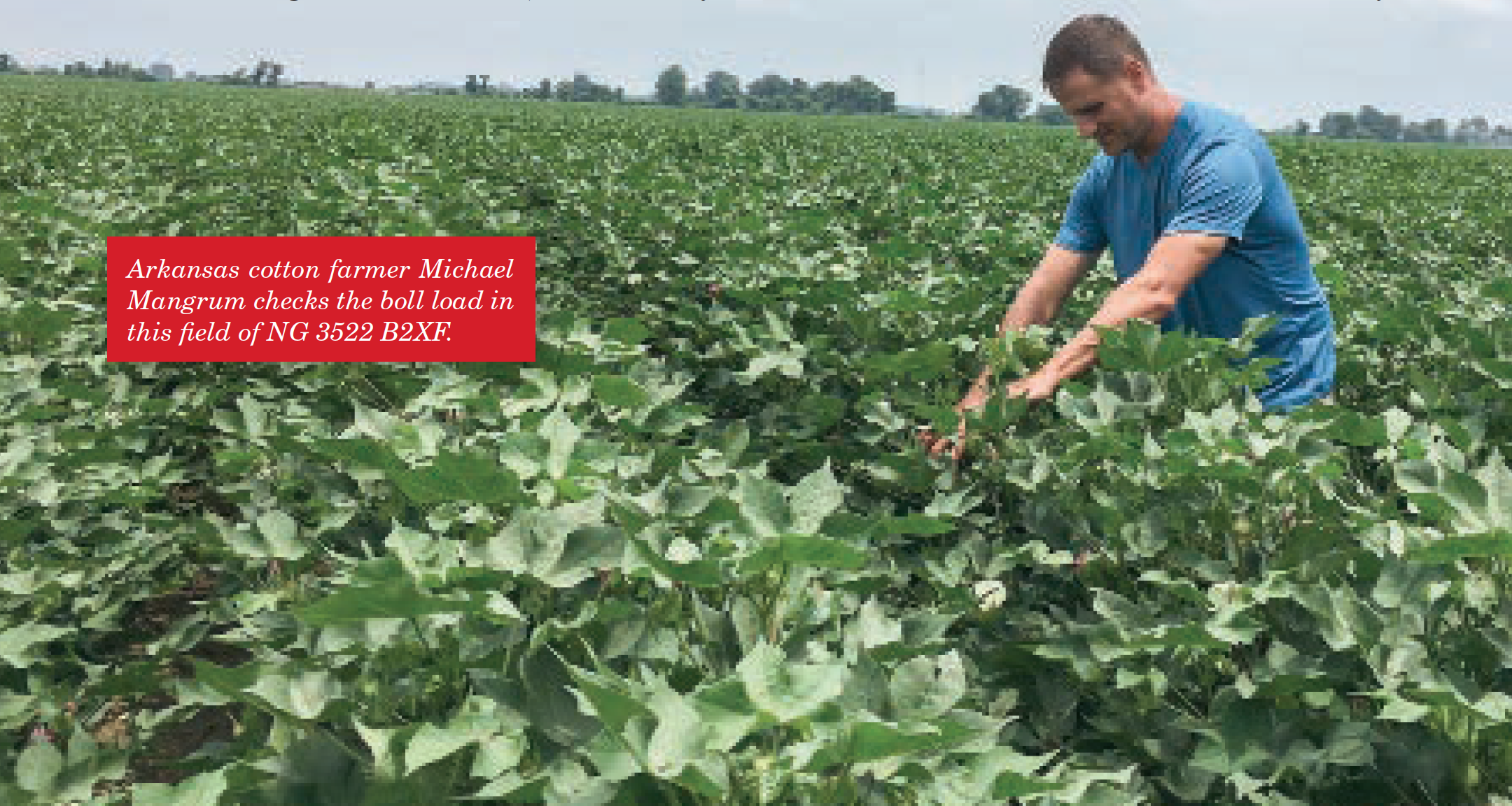 Stories passed down by his maternal grandmother tell how his great-great grandfather and his brothers came from Oklahoma and settled in Craighead County. The circumstances under which they arrived were reminiscence of the Wild West. They included characters such as Isaac Parker — the infamous hanging judge from Fort Smith, Arkansas — and a lethal encounter with a disgruntled Kentuckian bent on seeking revenge for a family member. She also recalled keeping watch at night for wild panthers that roamed the countryside.

Although past dramas have died down, the energy needed to operate this Arkansas cotton farm still abounds. Michael’s father, Murel Mangrum, took over the operation in the early 1980s. Michael, whose long-term goals did not include farming, received a zoology degree from Arkansas State University and planned to go on to optometry school. But before moving on with his career, he took off a year to help his father full time.

“After that experience, I decided to stick with farming and hit the ground running,” Mangrum says. “My dad soon retired and then passed away three years ago. The operation is now mine, and efficiency is my focus. I am constantly coming up with lists and looking for ways to do things faster and better.”

Today, Mangrum farms 1,290 acres of irrigated no-till and minimum-till cotton and 60 acres of soybeans near Monette. One field is under a pivot, and the others are furrow-irrigated. All of the ground is precision leveled. The cotton varieties he planted this year include DP 1518 B2XF, DP 1614 B2XF, NG 3522 B2XF, NG 3729 B2XF and NG 3699 B2XF.

When trying to decide which varieties to plant, Mangrum says he first considers historical yield data from his own farm. He then takes a look at university field trial results and listens to what his neighbors and area consultants have to say.

“I have two or three go-to varieties that I plant, and then I like to try some new ones as well,” he says.

When adverse weather conditions are not in play, his cotton typically yields 1,200 to 1,300 pounds per acre.

“These varieties are bred to grow,” he says. “When you are planting behind cover crops or peanuts, the plant just takes off because of the amount of nitrogen left in the soil. You have to stay on top of the crop with PGRs or the cotton will get too big.”

Mangrum recently began experimenting with cover crops that include a mix of rye, wheat and radishes on abut half of his acres.

“I broadcast the seed in the fall before mid-November, run a big plow through the middles and then leave it for the next year,” he says. “I burn it down in the spring and then plant directly into it. I run a water furrow every other middle with a smaller plow and try not to disturb the soil.

“In my experience, this practice has great benefits. The cover crop puts good microbes and nutrients back into the soil and also shades out a lot of the weeds. Other farmers in the area are experimenting with them, too.

“I also like to put out combinations of micronutrients on my cotton to see if they produce better boll retention or better yields. I try some every year, but nothing has grabbed my attention yet.”

Mangrum says pigweed is his most troublesome weed pest in cotton. Last year, his weed management program began with a generic dicamba burndown. This was followed by an application of Engenia herbicide, which was the only dicamba herbicide labeled for use on dicamba-tolerant cotton and soybeans in Arkansas.

“Engenia is lethal on pigweeds,” he says. “But this year, dicamba use was banned after April 15 so we went back to a Liberty and Roundup regimen. I’ve been able to keep my crop almost as clean with this program, especially when we apply Liberty when the weed is just a few inches tall.

“I didn’t have any problems with Engenia last year, but I did my own spraying, used special nozzles, watched the pressure and wind conditions, and knew what my neighbors had planted around me. You have to be careful with it.

“Because we couldn’t use Engenia this year, we came in right after planting with a standard tankmix of Liberty and Roundup.

Then we try to get in a residual such as Dual, a generic metolachlor or BASF’s new residual herbicide called Outlook. It seems to last longer than the other residuals.

“Liberty does not provide 100 percent pigweed control. If you spray this weed when it’s more than 4 inches tall, Liberty burns it down, but it greens back up and keeps growing. We always have to come back with choppers. So although Engenia made it easier to control pigweed, our best bet at this point is Liberty, Roundup and the choppers. We just have to be efficient with our application timing.”

Mangrum says tarnished plant bugs are his primary insect pest, and they are really bad this year.

“Once plant bugs show up at pinhead square, they don’t let up,” he says. “The taller and bigger the cotton gets, the more of them you have out there. I spray Transform, Diamond, Bidrin, acephate or some combination of these every week. I always try to rotate the chemistries.”

Matt Robbins, Mangrum’s crop consultant, contributes an extra set of eyes to the operation by scouting for insects and determining the nutritional needs of the plant.

“Matt does our soil sampling and writes up the variable-rate fertilizer applications so we apply what is needed where we need it instead of making blanket applications,” Mangrum says. “This approach is much more efficient, and the crop is more uniform.”

Another efficiency Mangrum brought to the operation was purchasing a John Deere 7760 round bale cotton picker with his neighbor, Brandon Snider.

“Because of the size of our operations, we couldn’t afford to buy one on our own, so we put the pencil to it and bought one together,” he says. “At harvest time, one of my guys runs the shredder, and one of his guys runs the module hauler. Instead of having two basket pickers and two sets of ground crews, we have one efficient operation.

“We have about 2,200 acres of cotton combined and can pick about 100 acres a day with the 7760. We have a few details to iron out for this year’s harvest, but we nailed it last year. Sharing the picker worked out perfectly.”

When harvest wraps up, Mangrum gins his cotton at Monette Co-op Inc. and Kiech-Shauver Miller Gin Co. in Monette.

Outside the field, the Arkansas producer picks up efficiency tips from his peers via a farmer’s group on Facebook.

“It’s a good tool to use if you have any questions about anything,” Mangrum says. “People post comments that provide good information about various production practices. There is also a section for posting used equipment for sale.”

He also joined Farmers Business Network last year, which gives him online access to data shared by other farmers in the area about varieties they are planting or what they are paying for crop inputs.

“The more farmers who join, the more data there is to access,” Mangrum says. “FBN is also trying to expand its horizons by finding marketing niches for the different commodities. It’s a good tool.”

When asked what he envisions as the key to long-term viability for cotton farmers, Mangrum says he would like to be able to trade with more countries on an open market without any tariffs or restrictions.

“I don’t want a handout, and most of the other farmers I know don’t either,” he says. “I enjoy the farming lifestyle, but I am a businessman who wants to earn money by marketing my cotton fairly to other countries. To me, it’s important to get a price for my crop that I am comfortable with, sell it and then do it all again next year.”

A Passion For Travel

After graduating from high school, Michael Mangrum had the opportunity to spend two weeks in Europe followed by a month in India made possible by a Rotary Club scholarship.

“In India, I got to travel to cotton-producing areas of the country,” he says. “I watched the Indians pick cotton by hand and take it to the gin by camel.

Everything at the gin is done by manual labor. The workers sit on the floor and remove the seed from the cotton with little delinting machines. Then they put it in baskets and take it down to the press.

“I then went to Costa Rica to do volunteer work and met people from all over the world who were backpacking through Central America. Traveling soon became my passion, and the next year I threw my clothes in a backpack and took off.”

Mangrum says he starts thinking about his next destination while picking cotton in the fall. So far he has traveled to 45 states and 75 countries.

“When I travel, I always try to make an agricultural connection,” he says. “I like to meet up with a local and strike up a conversation either in English or through an interpreter. Farmers all around the world have invited me to their farms or huts or villages to see how they do things. I show them my operation via photos on my phone. They are amazed by the expanse of the cotton fields.”

Mangrum says he typically travels during January and February. He says it’s his “mental getaway from farming.”

“There is so much to see and such a big world out there,” he says. “I like to experience the local customs and traditions as much as possible. Traveling recharges me for the next year. When I come back, I am ready to go.”