Across the Cotton Belt, the strategy is the same this year – no matter the location. Producers must find a way to manage this crop efficiently. And that means planting on time and starting the season strong – much like a racehorse bolting out of the starting gate at top speed.

It will be a challenge as farmers deal with low cotton prices, a new farm law, weed resistance and water availability in many locations – namely in California and Texas.

Add in the big front-end investment with the seed, and you begin to get the picture. Nobody wants to re-plant the crop, and it is essential that young cotton seedlings have plenty of vigor and growth potential.

Nowhere is that more important than in Texas – the largest cotton production state in the Belt. Although a three-year drought has had a serious effect on cotton production in many parts of the state, crop prospects look much better this year.

Not surprisingly, many producers – such as Doug Hlavaty in the Lubbock area – are waiting as long as they can to decide how much cotton to plant this year. But, when a farmer puts the seed into the ground, it needs to have a fighting chance to survive.

“It may sound unusual, but we are making decisions every day on this crop, and we haven’t even planted it yet,” says Hlavaty, who farms with his brother Lance. 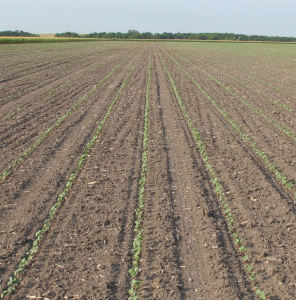 Early Crop Decisions
The big decisions will be made in May when Hlavaty finally decides which varieties to plant. He needs to match them with the right fields. And then there is the question of whether to add a seed treatment.

The High Plains producer says it is critically important that the seed respond to advantageous weather conditions in May.

Doug and his brother Lance are a two-man operation now since their brother Tommy retired two years ago.

Any discussion of planting strategies in this region also must include the issue of weed resistance. Even though the Hlavaty farm wasn’t hit too hard with resistant pigweed in 2014, a lot of money was spent controlling this problem.

Doug knows that some of the pigweeds went to seed last year, and he is concerned what might happen this year.

“We need to be ready for whatever happens,” says Doug. “I do know that resistant pigweed can affect how the season begins for us. And don’t forget that we still need a good planting rain later in May.”

Importance Of Seed Quality
Regardless of how the situation is viewed, seed quality is also a major priority. Texas AgriLife Extension cotton specialist Gaylon Morgan says this is a theme he consistently emphasized at winter meetings. He also knows that seed populations may be reduced.

“I have heard some farmers talk about cutting back on seeding rates to save money,” he says. “I always get nervous when I see this – especially if they haven’t done it before.

“You still need a uniform stand and should pay particular attention to seed quality, such as the cool-warm vigor index.”

Morgan points out that establishing two plants per row-foot in South Texas isn’t a detriment to yields. In today’s cost-cutting environment, that is good news. In areas farther north, such a practice might be riskier.

We simply don’t want to jeopardize yield and quality; that’s why a farmer has to be careful when he’s trying to reduce costs.”

Although it might look like young seedlings aren’t growing quickly enough, Morgan says it pays to understand plant behavior.

“Keep in mind that a young seedling is putting down a tremendous amount of root growth in those early days and weeks,” he says. “It’s what will keep the plant going for the rest of the season. That’s why the start is so important.”