Cotton has always had a reputation for being able to withstand a lot of adversity during a long production season. If you want proof of that statement, pay a visit to the Stuckey Farms operation in eastern Arkansas.

That’s where you’ll find a remarkable crop that has already withstood heavy rains. In fact, parts of the Mid- South received nearly three weeks of rain in June. To say that Sam Stuckey’s 37th consecutive cotton crop has faced a challenge this year is an understatement. But, through excellent and timely spray applications of preemergent herbicides and an overall aggressive approach, the crop is now only a few days late.

Stuckey, who farms with his brother Fred and nephew Michael East, has 1,000 acres of cotton along with a mix of rice, corn, milo, soybean and wheat acreage on farms located in Clarkedale and Lepanto as well as Island 40 in Shelby County (Tenn.).

It wasn’t easy but the Stuckeys planted their cotton on time during the May 1-5 period. In retrospect, they were fortunate. When the rains eventually came, the crop was already off to a good start because of effective burndown and dicamba applications in late March and early April.

Before planting, the Stuckeys put out a Gramoxone/Reflex application. Then, after the crop was germinating, a Gramoxone/Direx residual was put out. That was followed with an overlapping Dual application and a Roundup/Liberty combination. “Even with the non-stop rains in June, I feel pretty good about all of our crops,” says Sam. “We found windows during those three weeks in June where we could get in the necessary work. I couldn’t be happier with where this cotton is right now.” 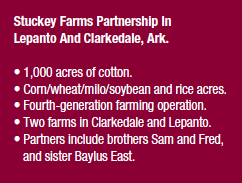 Stuckey made the switch to several new varieties this year, and all of the cotton acreage is planted primarily to:

He also has one Deltapine test plot. The crop season is near the midpoint, and now the question is can the cotton gain the necessary heat units in July and August? Sam remains cautiously optimistic.

I have seen late crops surprise me; cotton has an amazing ability to compensate and overcome adversity and make up for lost time. It just depends on the weather.”

Sam’s long-time consultant Chuck Farr has worked with him for 26 years and is equally optimistic about the cotton’s chances to recover from heavy June rains. He also credits Stuckey’s management skills as one of the reasons why this year’s crop survived such unpredictable weather. “It’s all about timeliness on everything,” says Farr. “That’s the key to Sam’s success. He does whatever is necessary to take advantage of those windows of opportunity.”

Barring anything unusual in the next two months, both Farr and Stuckey believe this cotton can yield “somewhere near 2.5 bales per acre” if favorable conditions exist. “If Sam will take care of the pigweeds, I’ll take care of the plant bugs for the next couple of months,” says Farr with a laugh. “After what we’ve been through, I think we can do it.”

Arkansas Extension cotton specialist Bill Robertson says the Stuckey success story is an example of how good management practices can overcome unforeseen situations such as unusual weather in June. “Sam and Chuck have done an outstanding job, and I’m not surprised to see how they’ve kept that cotton crop going,” he says. “It all boils down to perseverance and doing whatever it takes to get past these weather events that can sometimes slow us down. We still have a chance at a good cotton crop here in Arkansas.”

[toggle title=”Learn More about Stuckey Brothers Teamwork” state=”close” ]Sam Stuckey and younger brother Fred are part of a large family farming operation that includes sister Baylus East who works in the farm office. Meanwhile, nephew Michael assists Sam and Fred in various aspects of the operation while farming some of his own acreage. Fred says their ability to work together is because they know how to communicate – even when they disagree on a topic. “Let’s just say that we respect each other and can agree to disagree,” says Fred. “Once we make a decision, then it’s full speed ahead.” Meanwhile, Sam says the operation is very fortunate to have so many family members working together in the day-to-day activities. “We are too diversified and spread out, and it’s better to have everybody on board together,” he says. “I also like the fact that Fred, Michael and I can talk about what needs to be done as opposed to each person working on individual acreage. It’s a good situation, and it definitely works for us.” [/toggle]