A Farmer’s Perspective From The Heart Of Texas 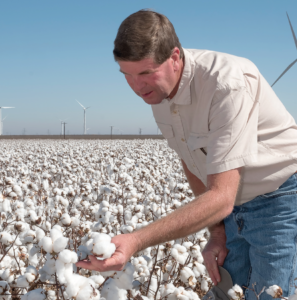 The Rolling Plains region of Texas is marked by rows of tall turbines harnessing wind to produce energy, bouncing tumbleweeds and cotton fields stretching out as far as the eye can see.

Mark Wright, who grows cotton near Roscoe, says his operation includes land originally owned by his grandparents on both sides of the family. Although he farms mostly cotton, Wright sometimes rotates a little wheat and corn to help with cotton diseases.

“Verticillium wilt is a big challenge in some fields and typically shows up on our irrigated land,” he says. “We try to break the disease cycle by rotating crops.

“Planting varieties with tolerance to Verticillium wilt is helpful, too, especially in heavily infested fields. I grew Dyna-Gro 3109 B2XF last season because it has good wilt tolerance. This year, I plan to also grow DP 1845 B3XF — one of the new varieties in the Deltapine Class of 18. It is described as being moderately susceptible to Verticillium and was one of the varieties I had in my New Product Evaluator plots in 2017. Even though I’ve looked at it for only one year, I am optimistic about how it will perform.”

NPE Program Experience
Wright has participated in the Deltapine NPE Program since it began in 2008. A press release touting the kick-off of its 10th year says when Monsanto acquired Deltapine seed brand, the company “met with growers to discuss their concerns. The result of those conversations was a partnership with the brand to find solutions and identify new and even better varieties. The Deltapine New Product Evaluator Program was hatched.”

Select farmers from across the Cotton Belt were asked to participate in the program “to evaluate pre-commercial variety lines on their farms and in their growing systems. The first season of NPE — 2008 — resulted in the Deltapine Class of 09.”

Wright says he typically tests four to five varieties in NPE plots each year.
“I also include some of the varieties I am currently growing to have a comparison,” he says. “I treat the NPE varieties just like I do the rest of my cotton. I want to get real-life information on how they perform on my farm a year before any of them are released. This helps me get an idea of which ones might work for my operation.”

Planting Strategies
In 2017, Wright planted 70 percent of his acres to DP 1646 B2XF on both irrigated and dryland fields. Most of his irrigation is center pivot, fed by underground water.

“Because we have a lack of ample water, I also grow winter wheat, which needs water at a different time of the year,” Wright says. “Our average rainfall is about 20 inches. The problem is much of our rain is in May and early June. And then it doesn’t rain again until the end of August and into September. The dry spell in late July and early August is a challenge.”

The Texas farmer says he likes to plant most of his cotton from May 20-25. However, he often waits until June to plant the dryland acres, which goes against the historical train of thought. His theory is that by planting the dryland acres a little later, the cotton can better survive late-season heat. By the time the weather cools off and it starts raining again, the cotton hasn’t burned up and is still viable.

“At the end of June last year, we had the worst hailstorm I have ever seen,” Wright says. “It was a hail out on about 500 acres. We replanted those to DP 1612 B2XF. A week later, a second hailstorm damaged another 200 acres. It wasn’t a hail out so we left it. This lowered our yield, but it was too late to replant.”

In-Season Management
Wright made his first plant growth regulator application — not a heavy dose — on the irrigated cotton at early square stage to promote fruit loading and keep the plant compact. This allows him to harvest efficiently with a round-bale stripper. He takes a “wait and see” approach to PGRs on the dryland cotton.

“If we get a rain on the irrigated cotton and it’s starting to bloom and grow a lot, we come back with a heavier PGR application at that time,” Wright says.

Like many other cotton producers, Wright has glyphosate-resistant pigweed on his farm. He controls the pest with XtendiMax herbicide. But he says his toughest weed is a perennial grass he is unable to control with glyphosate.

“We typically have this problem in our no-till or strip-till cotton,” Wright says. “We plow in the fall to get rid of the ‘clumps’ of grass so it will have to come back from seed. Residual herbicides are somewhat helpful but not where the grass is growing back from its roots.”
Wright says Bollgard and the Boll Weevil Eradication Program have done a great job in helping to control insect pests. He typically doesn’t see any damage from bollworms. Fleahoppers and thrips are his primary pests but are easily controlled. His consultant, Jennifer Lane, scouts the cotton to determine if an insecticide application is needed.

“At the end of the season, I was pleased with the yield and grade results, considering the tough weather conditions that included two back-to-back hailstorms,” Wright says. “Despite the challenges, I’ve had a love for farming from an early age. My wife, Dianna, also is involved in the operation, and I am appreciative of her support. Farming is a lifestyle we both enjoy.” 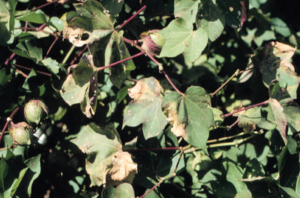 Symptoms of Verticillium wilt may be observed on relatively young plants; however, expression is greatest after flowering. Foliar symptoms consist of interveinal chlorosis or necrosis. As the disease progresses, severe stunting and premature defoliation can occur. Discoloration of the vascular system can be observed on infected plants. Younger bolls may abscise or become malformed.

Rotation with sorghum for one year can lower your risk level for subsequent cotton crops. The greatest benefit from rotation would be observed when it is initiated early before inoculum builds up to high levels in the soil.

Selecting partially resistant or tolerant varieties that possess the required agronomic characteristics and are properly adapted to a specific growing region is the cornerstone of any management program. However, the integration of other tactics can be used to further reduce losses related to the disease.