The Texas A&M AgriLife Extension Service has recognized a cotton and weed team with a Superior Service Team Award for their efforts on educating producers on auxin-tolerant cotton weed control systems.
The annual Superior Service awards, recently presented in Bryan, Texas, recognize AgriLife Extension personnel who provide outstanding performance in education or other service to the organization and Texans. 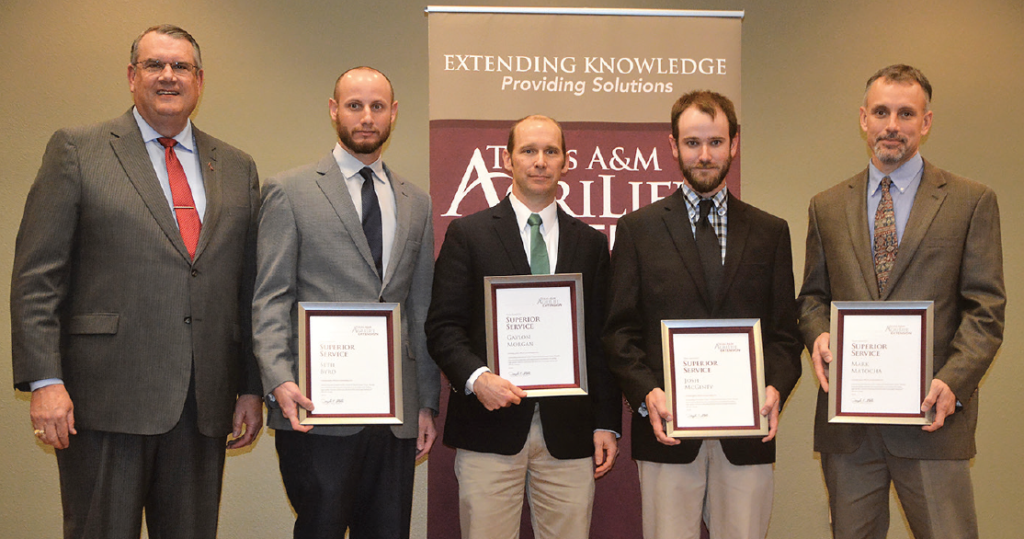 Balanced Perspective
In response to the expected release of new cotton herbicide technologies, AgriLife Extension cotton and weed science personnel worked with state and federal agencies to encourage a balanced approach based on scientific data for the introduction of the new formulations and associated application restrictions, according to the nomination.

The team worked with local and state commodity organizations, allied industry professionals, Texas Department of Agriculture, Texas A&M AgriLife Research and Texas Plant Protection Association to develop, implement and promote good stewardship of these new herbicides. This included the Flag-the-Technology approach to decrease the potential for misapplications of herbicides to susceptible crops.

“The potential damage to neighboring crops could have been in the millions of dollars and resulted in many other legal ramifications, as noted in other states,” the nomination says. “However, to date, the benefits of cotton producers having a tool for managing problematic weeds far outweigh any detrimental impacts from these technologies, and have increased economic returns to growers in 2017, and into the near future.”

In a letter of support, Steve Verett, Cotton Incorporated executive vice president in Lubbock, says “They have done a magnificent job helping our growers, consultants and other industry leaders navigate through the challenges and opportunities created by the adoption of these new technologies.”

In recognizing this team’s actions, the nomination states that as of mid-August 2017, 1,439 official dicamba-related injury complaints had been received by various state departments of agriculture across 10 Cotton Belt states. However, only 10 complaints related to either 2,4-D or dicamba were filed in Texas, home to more than 55
percent of the U.S. cotton acreage in 2017.

“While this is undoubtedly a reflection of Texas producers stewarding these new herbicide technologies and making good decisions, it is also a reflection of the tireless educational outreach efforts put forth by this team,” the nomination says. “Their efforts ensured producers and allied industry representatives in the state received up-to-date information and training on restrictions and regulations associated with the technologies.”

Multiple Approaches Taken
Team members worked closely with allied industry, grower organizations and the Texas Department of Agriculture to conduct and demonstrate the pros and cons of the new technologies. They also filled data gaps for Texas through small-plot research trials and ensured growers were receiving a unified message on the do’s and don’ts when applying the new formulations, according to the nomination.

To broaden the educational base of unbiased information, the team conducted seven internal trainings for county AgriLife Extension agents, integrated pest management agents and other specialists.

As a result, more than 100 AgriLife Extension personnel received instruction in label requirements and application guidelines, herbicide traits and the specifics of off-target movement and conditions that influence drift and volatility. The information was then dispersed to growers through the agents.

Kay Ledbetter is the communications specialist at Texas A&M AgriLife Research and Extension Center in Amarillo. Contact her at 806-677-5608 or skledbetter@ag.tamu.edu.