When he was 18 years old, Larron Copeland purchased 30 acres from his father and began shaping what is now known as Showtime Farms in southwest Georgia. Today, he raises about 5,000 acres of cotton, corn, peanuts and soybeans with his wife, Laura, and sons Brady and Colt. The family resides in a new home they built where Larron’s childhood home once stood.

“I have lived my entire life in the same spot,” he says.

In 2015, Mother Nature threw them a curve ball with inclement weather that materialized both at the beginning and the end of the growing season. The varieties they chose to plant included ST 6448GLB2, DP 1553 B2XF, Croplan 3885B2XF and a test plot of ST 6182GLT. As the rain began to fall early on, Copeland thought he was facing a potential re-plant situation.

Hardy Varieties Prevail
“A 4-inch rain fell on one of the farms right after I planted some 6448,” Copeland says. “I never thought I would see that cotton come up. We hill-dropped the seed and couldn’t get back in the field to run the rotary hoe because it was too wet. However, I had planted this cotton real shallow, and when I came back in a week, it had emerged.

“I like the way 6448 comes up out of the ground. We actually got a small premium for the 6448 that we planted early even though 2015 wasn’t a good year for quality with any of the varieties. 6448 was easy to manage, and we didn’t have to put a lot of Pix on it. We sprayed Liberty over the top so we didn’t incur much expense for hand pulling weeds.”

Prior to planting, Copeland made a burndown application, then came back behind the press wheel with a gramoxone product and Reflex to hold the weeds down. About one-third of the farm is pivot-irrigated. Last year, Copeland had 600 acres of cotton under pivots that he controls remotely and receives alerts via his smartphone. Copeland says the 6448 yielded well in both irrigated and dryland scenarios and picked clean at harvest despite all the rain that fell in the fall.

In 2015, Copeland also grew a test plot of ST 6182GLT, which offers the newest Stoneville germplasm — GlyTol LibertyLink TwinLink — and has full tolerance to both Liberty and glyphosate herbicides. He treated it just like he did the other varieties, and in the end, said it was comparable to the 6448. Quantities of 6182 were limited last year, but he plans to plant more of that variety in the upcoming season. 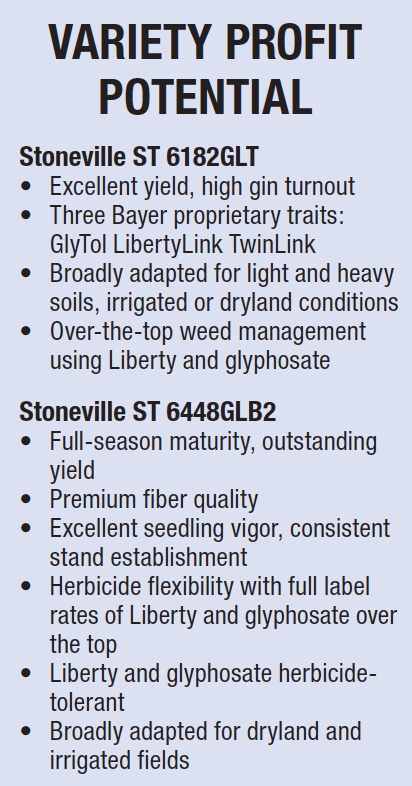 Fertility And Pest Control
The Copelands use a cover crop on many of their fields to prevent the soil from washing away in the winter and to pick up any nutrients that may be present. They take advantage of natural covers, such as henbit and volunteer rye grass, and plant wheat or rye in fields where the natural covers don’t emerge.

On some of his acres, Copeland plans to put down chicken litter this year with a compost spreader right before strip-tilling the fields. After the litter is delivered from north Georgia, his crop consultant, Bubba Lamberth, will have a sample tested to determine the nutrient content.

“I believe I can pick up some minor nutrients in the litter that I can’t afford to pay for in regular fertilizer,” Copeland says.

Like producers in other areas of the Cotton Belt, southwest Georgia farmers are faced with controlling ALS- and glyphosate-resistant pigweed.

“We spray Liberty over the top when the weeds are small to knock them out early,” Copeland says. “Liberty also controls any morningglory that’s out there.”

In the insect arena, stink bugs are Copeland’s primary cotton pest, although last year was the lightest pressure he can remember.

“We sprayed early for thrips, and later in the season, we sprayed just one time for stink bugs,” he says. “In fields where we pulled soil samples and found reniform nematodes, we plan to make an in-furrow application of Velum Total — a nematicide/insecticide.”

Season Wraps Up
As harvest approached, rain set in and continued throughout October, November and December. Copeland had to lease a third picker to get all of his cotton out of the field under these challenging conditions. Once the cotton was harvested, he transferred it to Mccleskey Cotton Co. — a full-service cotton ginning, marketing and warehousing operation — in Bronwood, Ga., where it was marketed through Staplcotn. As the last vestiges of winter begin to dissipate, Copeland takes time for reflection, set against a backdrop of Georgia’s longleaf pines.

“I continue to hope for favorable weather,” he says, “along with a better world to come and good leadership at home to enhance the overseas marketing system for U.S. cotton. As farmers, we invest a lot of time and money in our crop and would like to remain profitable at the end of the day.”

After the crops are harvested and before planting season begins, the Copelands operate Southpoint at Showtime Plantation, a hunting plantation in Terrell County, Ga. According to the venue’s website, “The Southern tradition and heritage of quail hunting on Southpoint Plantation dates back to the very early 1900s and continues today for the enjoyment of avid sportsmen.”

In addition to quail hunting, a trap shooting range is open to visitors as well. Trained, well-bred pointers along with in-house guides – Caleb Horton, Josh Wardrip, Brady Copeland and John Beamon – are on hand, and Larron takes part in the horseback quail hunts.

Copeland’s wife, Laura, is in charge of the beautifully appointed main lodge, which also is available for private parties and other functions, such as weddings. Guests can enjoy plenty of Southern hospitality as they sit down to home-cooked meals of fried chicken, pork chops and steaks, relax on the roomy front porch or go horseback riding on a guided trip across the 5,000-acre plantation.