Just days before the majority of South Carolina’s cotton was about to be harvested, the historic October 2015 storm drenched most of the state with trillions of gallons of rainwater, ravaging a crop that had already been compromised by a severe summer drought and heat wave.

Though estimates are still being revised, the best guess at this point is that only about 52 percent of the 235,000 acres of cotton was harvested — and much of what was salvaged was relatively low in yield and quality. To put this in perspective, about 98 percent of cotton is harvested in a typical year.

“If you look at our yields in South Carolina over the years, the chart will resemble a heartbeat. High yield, low yield. High yield, low yield. And it’s all based on whether we get adequate rainfall at the right times, and also on the conditions come harvest time,” says Michael Jones, associate professor and cotton specialist at Clemson University’s Pee Dee Research and Education Center near Florence. “We’ll probably have fewer growers this year because of the financial setbacks suffered in 2015, but we still have the potential for a respectable rebound.”

About 80 percent of South Carolina’s cotton is planted the first week of May. Some growers plant a little earlier or later, depending on what other crops they might have in their rotation. For instance, cotton farmers who are also growing peanuts might plant their cotton a couple of weeks later so that they will have time to get the peanuts in first. 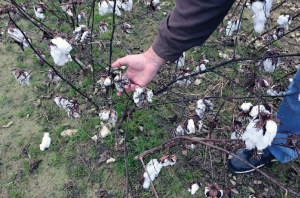 During normal years, the lower bolls produce the best cotton. But in 2015, the lower ones suffered severe damage.

Pre-plant ‘Dryout’ Needed
Much of South Carolina’s agricultural acreage remains soaked and boggy. The early October storm jump-started this situation, but a subsequent series of lesser but still injurious rainfalls have made things even worse. Because of excessive groundwater and rain-engorged ditches, there is literally nowhere for the water to go, making it difficult for low-lying fields to drain. Farmers hope that dry weather prior to planting will help alleviate these conditions.
“Growers have soil samples to take, fields to get ready, lime to put out and other preparations,” says Jones, an agronomist who conducts an extensive array of research projects and field trials at Pee Dee REC. “But if they can finally get some dry weather, then they should be fine in the spring.”

Assuming winter chooses to cooperate, cotton growers would then be rooting for a mild, moist spring followed by a summer that averages 3 to 5 inches of rain per month. When it comes to heat and drought, cotton is one of the most tolerant crops. But temperatures consistently above 95 degrees and/or weeks without rain can damage quality and quantity.

Ideal Harvest Conditions
Defoliants are used to cause cotton to shed its leaves in September. After that, most of South Carolina’s crop is harvested in October.

“Perfect harvest conditions would be low humidity with temperatures in the 70s to 80s in September and October,” Jones says. “When the humidity is down, it encourages the bolls to open and fluff up, which makes for an easier and more efficient harvest.”

Although South Carolina is a fairly small state in terms of the scale of its cotton production, the research being conducted at Pee Dee and other university centers is highly regarded. Clemson University hopes to receive $2.5 million from the South Carolina Legislature that will help expand its research and outreach programs even further.

“Clemson has a strong research team working with cotton,” Jones says. “Much of what I do here at Pee Dee is variety testing. Most of the varieties that are released to our growers come from Texas and even the far West. Our team has to determine which of these varieties are best able to withstand the environmental conditions in South Carolina.

“Over a period of years, we conduct small-plot research trials. We grow about 40 to 50 varieties side by side, replicate them and then see which ones produce the best quantities and qualities for our area.”

After last year’s doom and gloom, cotton producers are hoping for a fresh start – and maybe a healthy dose of luck – in 2016. One bit of good news that has already occurred is that 2013 and 2014 were both strong years.

“We can still produce a great crop this year. It just depends on our weather,” Jones says. “South Carolina has the technology and willpower to grow the best cotton out there. Growers just need a few things to go their way this time around.”