‘Farming must be sustainable, and raising cotton is how I can make that happen,” says Clinton Evans, who farms with his son, David III “Buddy,” in West Tennessee as Clinton Evans Farms. Last year, the father-and-son team grew 750 acres of cotton and 550 acres of soybeans. 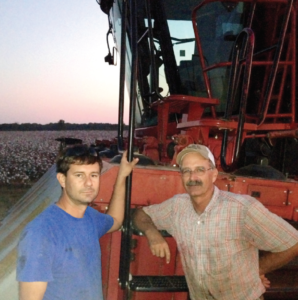 In 2009 as the cotton market began to decline, Evans looked for ways to trim his production costs without sacrificing yield and quality. A good farming friend of his, Randall Taylor Jr., suggested that he try planting some conventional cottonseed from Seed Source Genetics in Bishop, Texas, to see how it would perform on his farm. Evans decided to give it a shot.

“Although 2012 was a dry year, UA 222 showed a 250 pound-per-acre yield increase over CT 212 and had excellent fiber quality. The next year, I wanted to plant UA 222 exclusively, but it was in limited supply. Ed Jungmann with Seed Source Genetics sent me some 66 percent low-germ seed, which is all he had at the time. I planted it and had the best year ever. It averaged 1,275 pounds per acre. I’ve been raising UA 222 for the past four years. It’s drought tolerant, high quality with good mic and a long staple and has averaged 1,120 pounds.”

In 2016, Evans planted 750 acres of cotton that picked 1,688 bales, an average of 1,130 pounds per acre. In addition to cotton, he grew 550 acres of soybeans. When describing how the beans turned out, Evans says, “They did what beans do here in West Tennessee — yielded 40-50 bushels per acre.”

Pest Control Strategy
The primary weeds on Evans’ farm are Palmer pigweed, teaweed, morningglory, sicklepod and lambsquarters. His weed control strategy begins with a pre-emerge herbicide application of Treflan, Cotoran, Caparol and Command at planting. Envoke and/or Staple are applied postemergence over-the-top. Evans runs a cultivator when needed, followed by a hooded application of diuron and ET.

“We also have some good, sharp hoes,” he says. “And in 2017, we plan to try some new pre-emerge herbicides — Brake, Zidua and Outlook.”

Because Evans grows all conventional cotton, he stays in close communication with his neighbors who plant GMO crops tolerant to herbicides, such as glyphosate, glufosinate and dicamba.

“I always remind my neighbors I am planting conventional varieties, so we won’t have a problem with herbicide drift,” he says. “We also are protected because our farms are somewhat isolated, and we have tree line buffers around the fence rows.” 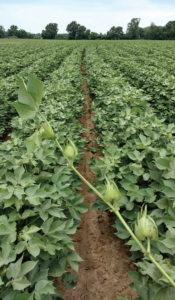 Pictured here is the fruit load on a lower fruiting branch of UA 222. This variety begins setting fruit on the fifth or sixth node, then comes back and sets fruit on the lower branches.

Troublesome insect pests that threaten his cotton include the usual suspects: thrips, plant bugs and bollworms.
“When it comes to scouting for insects, I rely on my consultant, John Joyner,” Evans says. “He has a trained eye and has scouted my cotton for the past seven years. The key to controlling insect pests is to locate them early. Orthene over-the-top typically works best for thrips and plant bugs. For bollworms and bollworm eggs, Orthene and a pyrethroid tankmix are effective.”

As the season wraps up, Evans uses conventional cotton pickers and module builders at harvest time.
“In 2016, our cotton averaged 1,130 pounds of lint per acre with a 3-cent premium over loan rate,” he says.

Farm Bill Footnote
Like all U.S. cotton farmers, Evans is concerned that the current Farm Bill does not properly support the American farmer and has weakened cotton’s infrastructure.

“We as farmers are the ones riding this market wave, and it has gotten hard to float,” he says. “Some are actually sinking. Cotton deserves more attention in the next Farm Bill because it has historically been and continues to be a major crop in the United States. It is time for our lawmakers to put a Farm Bill together that an American farmer can stand on and be proud of.”