A Mississippi Delta cotton farmer attributes his success to having top-shelf talent on both the personnel and production fronts. 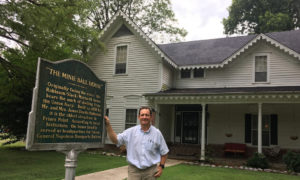 ohn McKee III’s farm office in Friars Point, Mississippi, is located in the town’s oldest structure, which originally faced the Mississippi River. It is known as “The Minie Ball House” because it bears the mark of shelling from the Union Navy — photo by Carroll Smith

The Mississippi Delta is a unique realm of the universe that attracts people from all over the world. Beginning their journey on Highway 61 and then deviating onto lesser-known paths, tourists search for a glimpse of times past that for all practical purposes exist only in the mind’s eye of the ones who lived them.

However, the beauty of the cotton fields, binding Delta past to Delta present, is a tangible example for all to see. And to create this commodity that pleases the eyes and hopefully pays the bills, John McKee III blends art and science along with a winning lineup of colleagues, varieties and herbicides.

Today, he farms 2,200 acres of cotton in Coahoma County on land owned by his family and land he leases from others. In 2017, McKee rented part of the Stovall Farm, which for 40 years was run by his long-time friend and farming neighbor, Pete Hunter, who now works for McKee part time.

“Pete is my sounding board, provides a wealth of experience since he knows the Stovall place like the back of his hand and serves as a liaison with my landlords,” McKee says. “He can do every single job on the farm from the top to the bottom, and we are grateful to have him.

Bryan Davis is McKee’s farm manager and in charge of day-to-day operations that involve all the employees and equipment.

“He also is an Army National Guard soldier, an incredibly hard worker and the best mechanic on the farm,” McKee says. “My goal is to get Bryan ready to take over his own family operation in Tunica County one of these days.”

Another member of the team who will take on any task he is asked to perform from laying Poly Pipe to washing tractors is Clarence Swiney, who has worked for McKee since 2002.

“Swiney is strong, and when he sets his mind to it, he is a really good worker,” McKee says. “Kevin Pearson is a young guy who worked for me several years ago and has now come back. He can pretty much operate everything on the farm.”

Two other key players on the team are McKee’s cotton consultants, Joe and Kim Townsend.

“Joe also is a good friend of mine, and his wife, Kim, is an agronomist from Australia,” he says. “Their expertise is a good combination. I have had very good crops with them as my consultants.”

Wrapping up the operation’s winning lineup is McKee’s wife, Nancy, whom he describes as a “force of nature.”

“Nancy has the energy of a Red Bull, the determination of a pit bull, the brains of Einstein and the creativity of Da Vinci,” he says. “All I have to do is point her in the right direction and just hang on. She is making a huge contribution to my well-being and success.” 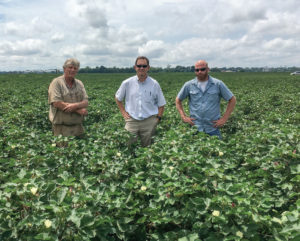 From left, Pete Hunter, John McKee III and Bryan Davis are pictured in a field of PHY 480 W3FE that McKee says holds the best potential of any cotton variety on his farm — photo by Carroll Smith

With all the players in place, McKee turns his attention to the other elements needed to produce the best cotton crop possible. In 2018, he planted 11 cotton varieties, eight of which were PhytoGen. Several of these PhytoGen varieties were part of two on-farm trials that McKee conducted this year.

Although McKee says he likes competition among the cottonseed companies, he calls himself a “PhytoGen grower” and is a big fan of what he sees coming down the pipeline. The performance of the WideStrike 3 Insect Protection and Enlist cotton traits he has observed has been a plus for McKee as well.

“For example, I did not spray any of my WideStrike 3 cotton for bollworms,” he says. “That technology saved me a lot of money.”

Just as McKee started harvesting his crop this year, a week of wet weather set in.

“My average yield is much higher than it used to be, and I need every bit of it,” he says. “It would be nice to average 3 bales per acre, but I don’t know if we will get there anytime soon. Before the rain came, our cotton crop was looking average to above average. But after about 2 inches of rainfall, the quality and yield will suffer. However, the weather we got from Tropical Storm Gordon was nothing like hurricanes Katrina and Rita.”

McKee also is part of a network of cotton farmers known as the PhytoGen Horizon Network. These growers conduct on-farm variety trials on their operations. This year, McKee had two different PhytoGen trials totaling about 85 acres.

“Valuable information goes back and forth between the farmers and the PhytoGen cotton development specialists and sales people,” he says. “I share my yield monitor data, and they also take hand yield data with scales. Then we compare the two. I also enjoy getting to network with other PHN farmers in different cotton-growing areas.” 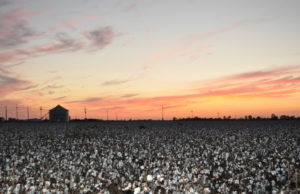 John McKee III says nothing is more inspiring than the beauty of a Delta cotton field at sunrise and sunset near Friars Point, Mississippi — photo by Nancy McKee

When asked about the weed pressure on his farm, McKee is quick to say, “I live in the epicenter of all things pigweed. It’s a big problem for us. But when I apply a tankmix of Enlist One and Liberty herbicides, it kills every pigweed out there. It provides excellent control.”

Next year, McKee plans to use a PPO herbicide, such as Valor or Reflex, about two weeks before planting to beat back the weeds and follow up with a pre-emerge herbicide behind the planter.

“For the first shot over the top, I will apply a tankmix of Enlist One and Liberty, then come back with a residual and maybe one more shot of Enlist One with Roundup after that,” he says. “I believe this weed control program will help keep my fields clean.”

Another weed control strategy McKee plans to implement is planting a cereal rye cover crop. According to the U.S. Department of Agriculture, cereal rye and its residues are quite active against weed species of pigweeds. The agency says if cover crop residue is left on the soil surface, it can last for several weeks depending on weather conditions.

“I understand that pigweeds don’t like to grow around cereal rye, and I am interested in that,” he says.

When asked to name the biggest challenges U.S. cotton farmers face today, McKee says several come to mind although in no particular order.

“Trade is a big one right now,” he says. “There is no doubt that the tariffs have hurt us, and we just hope there is a positive resolution in the near future. Other notable challenges are the weather, resistance, and drift back and forth among our farming neighbors from competing technologies. This is something we must continue to work on.”

Despite the risks inherent to farming cotton, McKee says the rewards far outweigh them.

“Times are good and times are bad, but making the journey alongside some of the most colorful personalities in the world has been truly golden,” he says.

“As my father used to say, ‘Sometimes brute strength and ignorance triumph over science and skill.’ I love both the science and the art of producing a beautiful cotton plant. It’s just what I do, and it keeps me humble.”