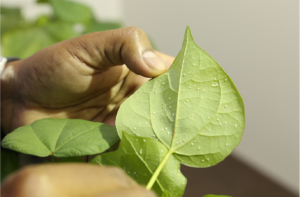 Because whiteflies prefer green, lush cotton more than plants near maturity, most of the crop planted early in April and May avoided whitefly problems. However, Roberts has observed whiteflies on late-planted cotton, or cotton planted in June.

“Over time, whiteflies have adapted to infest plants that will remain green or be a suitable host for the insects to complete a generation,” Roberts says. “It takes between 15 to 20 days for a whitefly to complete development on a cotton plant once an egg has been laid. Also, the nutritional value may be higher on late-planted cotton.”

Scouting remains the best course of action against whiteflies. These sucking insects feed on the underside of leaves and excrete a sugary substance called “honeydew” that serves as a host for sooty mold fungus. The accumulation of honeydew and sooty mold leads to quality problems on open cotton bolls. When uncontrolled, whiteflies can reduce cotton yields and affect quality.

“(Immature whiteflies) are on the underside of the leaves and excrete honeydew,” Roberts says. “This can be a serious issue in terms of fiber quality or the spinnability of fibers at mills.”

Growers need to be timely with their insecticide applications to avoid an outbreak. However, University of Georgia Extension encourages producers to conserve beneficial insects by applying insecticides only when thresholds are met.

According to Roberts, about 30 percent of Georgia’s cotton crop, or about 435,000 acres, were planted in June this year.

Late-planted cotton still has a couple of months left in the field before harvest. Whiteflies remain a threat to cotton until all the leaves have dropped from the plant, Roberts says.

Compared to the 2017 cotton crop, whiteflies have been largely undetected for most of this summer. However, during late August and early September, numbers have increased to the point where producers need to be on alert during the final months of the growing season.

“Only a small percentage of cotton in Georgia has required treatment to date, but we still have a long way to go with the lateness of this crop,” Roberts says. “Most acres that have required treatment so far were planted in June. We learned a lot of hard lessons with whiteflies in 2017, and it is imperative that control measures are applied in a timely manner.”

Once established, whitefly populations are very difficult to control and can easily reach outbreak levels in a field. Control costs are higher if farmers are late with initial treatments.

For more about Georgia’s cotton crop, go to www.ugacotton.com.