Mississippi author David L. Cohn once said, “The Mississippi Delta begins in the lobby of the Peabody Hotel in Memphis and ends on Catfish Row in Vicksburg.” This region is proud of its history, which contains many colorful chapters populated by Indians, blues music and snowy white cotton fields.

Gary Bailey, who spent several years as a crop consultant, now farms with his father-in-law, Brad Cobb, after marrying Cobb’s daughter, Lee. They all collaborate, including Brad’s wife, Brenda, and their son, Bradford.
This Mississippi Delta operation includes plantations owned by the Leatherman family in Robinsonville and Lake Cormorant; the Smith family in Dubbs; and the Tate family in Tunica.

For many years, cotton was grown almost exclusively on the farm. Today, in addition to cotton, the operation includes soybean, corn and rice acreage. The family also owns and operates Three Way Gin in Tunica.

Passing Down Knowledge
“Although we now manage four crops, cotton is still our mainstay,” Bailey says. “We doubled our cotton acreage this year. And 80 percent of the acres are irrigated, using both pivot and furrow systems.”

Cobb started Bailey off with the basics and then moved on to educate him about the “art of planting” and the importance of maintaining and trading equipment when upgrades are necessary to avoid costly downtime.

“As a scout, I never experienced planting,” Bailey says. “As Brad and his uncle, Dutch Parker, taught me, planting cotton is ‘an art.’ It is very sensitive to planting depth and ground prep. An uneven bed can change the depth at which the seed is planted.

“I have learned from my father-in-law and Dutch — who have watched cotton production evolve through the years — what to do and what not to do to keep the crop profitable.”

As he continues to hone his skills, Bailey hopes to be an integral part of writing the next chapter in the family operation’s story of successful cotton production. He is particularly excited about all the new technology available today to help make this a reality.

Cutting-Edge Tools
“To me, the biggest advancement in cotton farming is the John Deere 7760 round bale picker compared to the basket pickers we used in the past,” Bailey says. “The amount of labor and other equipment required for the older pickers has decreased with the introduction of the 7760, which makes round bales onboard and drops them off on the go.

“We also are working with Circle S Irrigation and our local NRCS office on new irrigation technology, such as soil moisture probes. We don’t rely on them 100 percent, but they are good tools to help determine when to start irrigating.”

Another strategy Bailey likes is pairing new school GPS systems on John Deere tractors with old school plows. Even after multiple herbicide applications have been made — both pre and post — to control glyphosate-resistant Palmer amaranth, weeds still break through in spots. In young cotton, the preciseness of John Deere’s GPS system allows them to move the coulters on the plow closer together to better manage escapes in a few troublesome fields.

“If Brad and Dutch had not taught me about plows in the past, I never would have thought of breaking them out and hooking them to a tractor with GPS technology,” he says.

“We have to consider both of these factors to make the best variety decisions,” Bailey says. “So far, DP 1725 B2XF and DP 1518 B2XF have shown great yield potential and very good grades. We have grown production for them for the past two years. In 2017, we also are evaluating DP 1646 B2XF and DP 1614 B2XF to get an idea of how they will perform.

“When glyphosate-resistant Palmer amaranth began showing up, we planted Stoneville 4946GLB2 so we could apply Liberty herbicide. After leaving out that variety this year, we realized we have a nematode problem on one of the fields.

“We didn’t notice it before because Stoneville 4946GLB2 has some nematode tolerance,” he adds. “That being said, we will pursue planting a nematode- tolerant variety there in the future. Yield performance will be important, but the level of nematode resistance will be just as important.”

In addition to plowing and roguing, Bailey relies on new herbicide technology to keep cotton fields weed-free.
“In our operation, we value the dicamba technology that controls glyphosate-resistance Palmer amaranth,” he says. “It works extremely well and has made our crop cleaner. The key to avoiding problems is working with our neighbors and applying the herbicide according to the label.

“In the spring, glyphosate-resistant ryegrass can be troublesome. The best way to control it in cotton is a burndown application in February or early March. We typically apply Roundup and 2,4-D or Roundup and dicamba. If the beds are ready to plant and we don’t have to do any tillage, we include a pre-emerge herbicide, such as Valor.”

In the insect arena, Cobb and Bailey depend on their consultants — Jim Arrington and Tim Sanders — to check the cotton twice a week and
submit recommendations.

“They scout heavily for plant bugs, which are our primary cotton pest,” Bailey says. “They also are seeing a lot of moths and eggs this year so we are monitoring that as well. Even with Bollgard II, a heavy infestation will require treating for bollworm.”

Although cotton farming certainly has its challenges, Bailey says, “Learning from people like Mr. Brad and Mr. Dutch Parker, who have seen it all, is priceless. Today’s technology does make cotton production easier. But just seeing those men each day and knowing I am part of such a rich history and tradition associated with cotton in the Mississippi Delta is the biggest reward for me.” 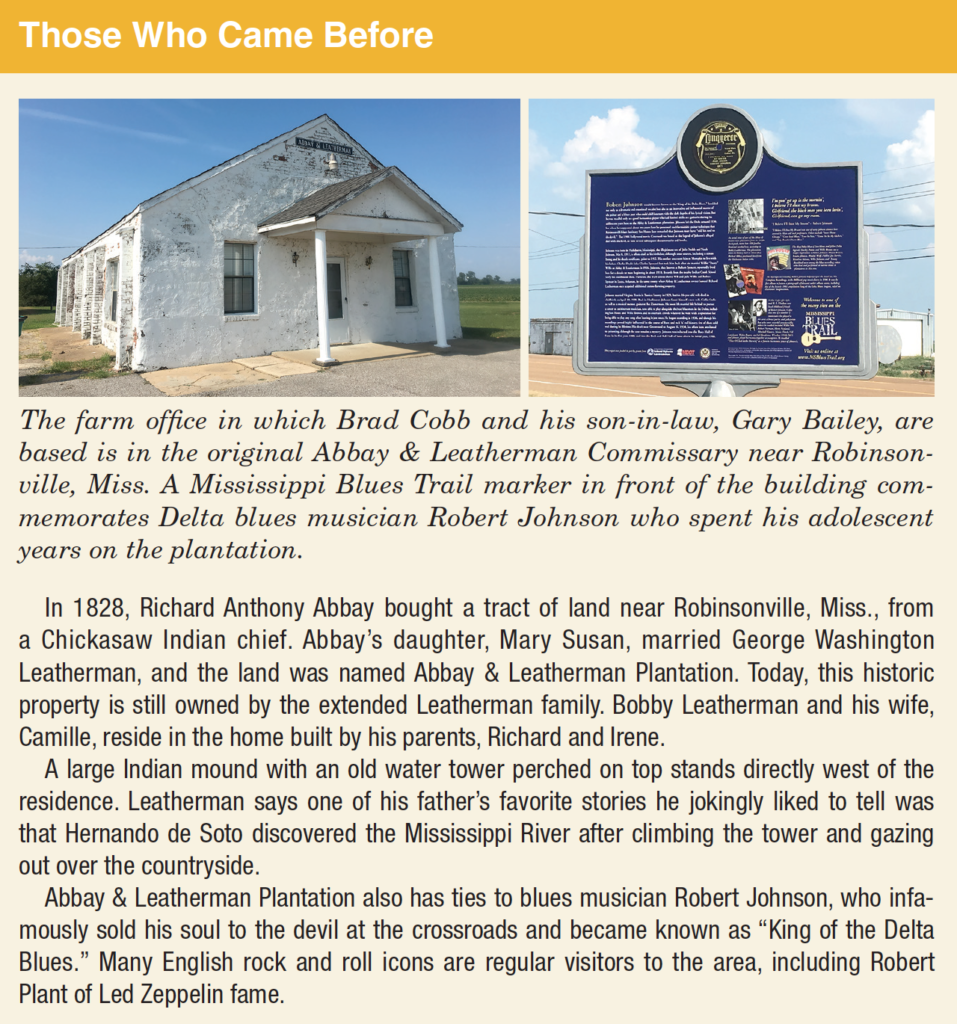 The Wilders: A Texas Heritage