If there is one obvious personality trait that all cotton industry folks have, it’s generosity. When time is precious for everyone, it’s nice to know that farmers, merchants, marketing cooperatives, warehousemen, manufacturers, ginners and cottonseed representatives always are willing to share information. Or, at least, it seems that way to me.

Maybe I’m being naïve. But I rarely run across someone from the industry today who isn’t willing to lend a helping hand. Nobody will share company secrets, but there is a common thread of generosity that runs through this industry.

And a perfect example of this kindness was the late Dan Krieg, a Texas cotton farmer who wore many hats – including 35 years as a Texas Tech University professor. Dan, a long-time friend of Cotton Farming magazine, passed away earlier this summer at the age of 72. Frankly, I was surprised that Dan was that old. He acted and talked like a much younger person. He had that much energy.

I have such good memories of Dan that it’s hard to know where to start. I had a few encounters with him during my time at the National Cotton Council from 1985 until 1998. But it wasn’t until I joined Cotton Farming in 1999 that I became friends with this Texan with the booming voice and friendly smile. It could be in the lobby of a hotel or perhaps walking the fields of an event in Texas, or maybe in a crowded room surrounded by hundreds of other industry folks. Wherever I ran into Dan, he had time to talk. It didn’t matter what crisis was confronting cotton farmers, Dan was the eternal optimist. Would the drought hurt the crop this year? Maybe, but somehow we’ll get through it, Dan would say. Can Texas continue to produce superior fiber quality? It can if farmers appreciate the importance of quality, Dan would say. And so it went for years.

I never saw Dan in the classroom at Texas Tech University, but I am told that he cared for his students and was more of a mentor than teacher. He took a personal interest in anyone who was serious about wanting to make agriculture a lifetime career. And he should have received a gold medal for the times he helped members of the ag media understand complicated agronomic issues on the turnrow.

Maybe his love for the land and everyone associated with agriculture is why he was such a popular speaker at various cotton meetings through the years. If you wanted someone who knew how to speak the language of farmers, you always wanted Dan Krieg on the program. He could talk for 30 minutes or an hour, and nobody in the audience ever fell asleep. He simply connected with people and spoke in a folksy, down-home way that sounded like your grandfather imparting advice while the two of you sat in a fishing boat. He didn’t overwhelm audiences with too many statistics. Mainly, he spoke from the heart.

I can remember when he was one of the speakers at a Cotton Incorporated meeting in Memphis that had attracted attendees from around the world. These representatives represented all sectors of the global cotton industry – including researchers, spinners, manufacturers and others. 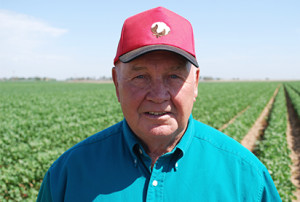 Was there a language barrier as Dan talked about the importance of fiber quality in U.S. cotton production? Absolutely not. His audience listened attentively. They laughed when he made a joke. They liked the pictures that he showed during his power point presentation. More importantly, they respected what he had to say because it was obvious that he had a passion for anything related to cotton production.

I was certainly one of the persons who was furiously taking notes trying not to miss any of the highlights of his talk in Memphis. Then, he concluded his remarks by showing a final picture on the screen that was supposed to sum up his message. Incredibly, it was a large image of Cotton Farming’s January 2002 cover photo. It had a closeup shot of a beautiful cotton boll with the famous caption: Fiber: Quest For Quality.

This was an issue of the magazine that our staff took a lot of pride in producing. But, I had no idea that Dan would use the cover photo in his presentation. When the meeting concluded, I found him and asked the obvious question: What made you use that image in your presentation? He smiled and said in a matter-of-fact voice: “Well, it was the perfect picture of what I wanted to communicate to the audience. Sometimes, a picture says it all.”

That answered my question, and I thanked him for using the magazine’s cover photo.

From that point on, I always enjoyed the conversations I had with Dan – whether they were planned or unexpected. He was a generous man who loved to talk about cotton with anybody who would listen. And he was a walking storehouse of information.

It is hard to believe he’s gone. He touched many lives, and no matter how much time goes by, we won’t forget the impact that our friend Dan Krieg had on the cotton industry.