If any young farmer ever needed a mentor for the right way to produce a cotton crop every year, he couldn’t find a better role model than Gene Ogden of Waverly, La.

This 70-year-old farmer has delivered his last crop to the gin and intends to retire from the rigors of his chosen career. He and his younger brother Douglas are stepping away from farming at the same time.

You’d be hard pressed to find a more efficient farming operation in Louisiana. The farm is located 15 miles south of Interstate 20 in the northeast part of the state and is a pristine piece of acreage. You won’t find any resistant weeds or serious outbreaks of a particular insect pest.

If you had driven by these fields during the last couple of weeks, you would’ve seen beautiful white cotton ready to be picked.

The Ogden brothers have had a reputation through the years for doing whatever was necessary to prevent serious problems from occurring on the farm. They had a proactive attitude about weed resistance, insect outbreaks and finding the right variety to plant, and their efforts always seemed to pay off.

Gene says he’ll miss farming, but he intends to help his nephew Neal on nearby acreage. That is how he’ll keep his hand in farming. But, for the most part, he’ll spend more time with his grandkids, wife Margie and friends in the community. He’ll also make time for hunting trips with long-time friend Billy Fletcher, a Deltapine seed salesman in nearby Delhi.

“I’m in a position to retire, and I thought this was the right time,” he says. “I really wanted to enjoy these next few years even though it’s hard to imagine not being out there on a tractor every day.”

The Ogden farm consists of about 2,500 acres with more than 75 percent planted to cotton. The rest is devoted to corn and soybeans. Had it not been for excessive rains that blanketed Louisiana in late July, Gene figures that this year’s cotton could have yielded close to 1,200 pounds per acre.

Unfortunately, that target couldn’t be met because of rain accumulations that totaled 30 inches between July 31 and mid-October.

“The additional rainfall definitely had an impact on our cotton,” he says. “A lot of the old bolls just fell on the ground, and we lost a lot of cotton.”

Still, most observers say it’s remarkable that the Ogden farm was able to salvage 800- to 900-pound yields.

Gene has a lifetime of experience in cotton, beginning when he was a small child dragging a sack into the field every day to help his father during harvest season.

It’s the only life he’s ever known, and he wouldn’t change anything about it – even though weather conditions have made it difficult for crop development in recent years.

Although the Ogden family has always grown cotton, there was a time in the 1980s when they planted a lot of grain. That experiment ended in 1983, and for the past 29 years cotton has been the primary crop.

The blackland soil is particularly suited for cotton, according to Gene. It is probably the one crop that thrives in the environment of northeast Louisi-ana, which can have a longer growing season than other production regions in the Cotton Belt.

An outside observer might be curious how Gene and his brother decide which varieties to plant each year. For the most part, they’ve planted Deltapine varieties through the years, even though they did try some Stoneville varieties in the past.

Gene says his approach to variety selection is simple. He tries to keep up with what his neighbors have planted and what has worked well. He also tries to absorb as much information as possible from Official Variety Trials (OVT) and on-farm trials at research stations in the state.

Another source of information is the Deltapine research station in Scott, Miss., where he monitors new varieties about to be commercially released.

Gene likes to plant a new variety on his acreage for two years to see how it performs before completely committing to it. He also cooperates by planting market development and side-by-side trials for Deltapine on his acreage.

“Our cotton has definitely improved in fiber quality in recent years,” says Gene. “We are consistently getting 36 staple readings, and some of our loan values have gone up to 57 cents.”

Looking back on his long career that started more than 50 years ago, Gene says the early 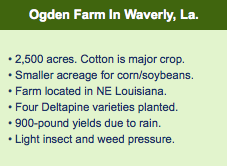 hardships as a young farmer helped him along the way. He believes today’s farmers could learn a lot from the older generation.

In particular, he recalls the extreme sacrifices that his parents made in raising a family while also doing whatever it took to raise the crop.

“I can remember when my mother would get up early in the morning and fix all of us breakfast,” he says. “Then, she’d go out into the field and help us with the crop. Then, she’d head back to the house to do all of her other chores before getting dinner ready for us.

“I think some of today’s young farmers need to go through that kind of experience. It would make them appreciate what they have today. When I look back at my early days, I know that we grew up in difficult times, but we were truly blessed.”

One theme has been central to Gene’s farming career. He has adapted to technology and is willing to try anything if it will make him a more efficient farmer. But, mostly, he has appreciated whatever tools were available to improve his operation’s financial bottom line.
He remembers boll weevil eradication, tobacco budworms and Roundup Ready technology as being events that had a major impact on how he farmed.

“I can remember so many events and challenges that we overcame,” Gene says. “It gives me a good feeling to know that we did the best job we could do. Cotton is what gave us the life we have today.”

Now, Gene will get to enjoy more time with his family and reminisce with the grandkids about what it was like to grow cotton “in the good old days.”

And he’ll certainly look forward to the next hunting trip with friends.

Two of Gene Ogden’s best friends – Billy Fletcher and Bryant Williams – say that it will be a long time before they see better farmers than Gene Ogden and his younger brother Douglas. These two farmers have set a high mark for excellence for how to grow cotton in northeast Louisiana.

Fletcher, a Deltapine sales representative, has known Gene his entire life and says that the Ogden farm has been one of the most successful in the region for many years.

“It’s definitely one of the cleanest and most efficient farms anywhere,” he says. “If anybody is going to make a crop in tough times, it’s Gene Ogden.”

Fletcher says Gene is admired throughout northeast Louisiana as being a meticulous farmer who is very hands-on in how he approaches a crop season.

“I’m looking forward to going on hunting trips with Gene,” he says. “It will probably feel strange for him at first, but I think he’s earned the chance to do some other things. He was a fabulous farmer.”

Crop consultant Bryant Williams has also worked with the Ogden farm for many years and has equal thoughts about Gene and Douglas.

“Gene isn’t afraid of technology, and it has made him a better farmer through the years,” he says. “It’s been a pleasure working for him. I don’t know how else to say it. He always farmed the right way and never left anything to chance.”